91 Year Old Henry Gray Has Lost Everything In Louisiana Flooding 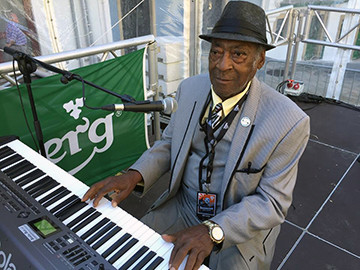 Legendary blues piano player Henry Gray is a resident of Baton Rouge, Louisiana, hard hit by the flooding. Henry’s home is underwater and earlier today Henry stated “I lost everything.”

Gray is revered in the music community, and he is a beloved friend to many of its artists. Recently, the Delta Groove label released Gray’s latest studio effort with Bob Corritore called ‘The Blues Won’t Let Me Take My Rest.’ He has played with and for many music legends including Little Walter, the Howlin’ Wolf, Muddy Waters, Willie Dixon, Rolling Stones, Mick Jagger and Elmore James.

As a consequence of recent flooding in Baton Rouge, Louisiana, Gray has lost a lifetime of keepsakes as well as his home. If you can, and desire to help in any way, big or small, please visit the GoFundMe page established by his friend Bob Corritore.