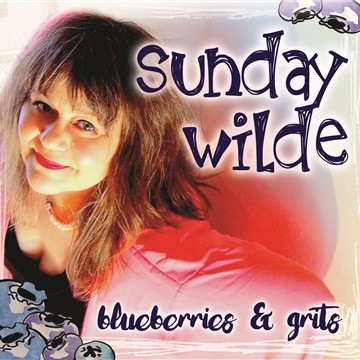 Sometimes, in order to move forward, you have to step back. That is exactly what Canadian blues songstress, Sunday Wilde, has done with her new release, Blueberries and Grits. This all acoustic, blues and roots project is the sixth from the award winning artist from Northern Ontario.

Wilde is no stranger to rural life. She lives in a remote town north of the Great Lakes, however, over the years, she’s 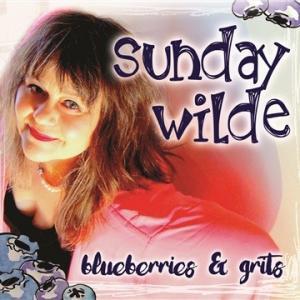 developed a deep love for the Mississippi Delta and recognizes the similarities between the two locations. This album, for example, was recorded in Memphis, Tennessee and Clarksdale, Mississippi requiring two major road trips to make it happen.

Working with 2x Grammy nominated artist/producer, Gary Vincent, Wilde wanted a completely acoustic, “old-timey” sound. They nailed it, bringing in a bevy of talented artists and vintage instruments including a J. Estey 1857 Cottage Pump Organ and a 1928 Stella guitar. Combined with piano, stand-up bass, dobro, trumpet and washboard, this is as authentic as it gets in the 21st century.

Straight out of the gate, she grabs the attention of the listener with, “Show Me a Man.” Its highly descriptive lyrics come across as a woman’s prayer for the perfect man. Her classic, sultry voice moves from a purr to a growl, reminiscent of the great female blues singers of the 20s and 30s. This is Sunday’s style and it suits her right down to the ground. In just a few seconds, we were transported back in time, to the days of the southern minstrel shows or the back room of a New Orleans brothel.

Men have long been the topic of Sunday Wilde songs, and that theme continues on this album. From original tunes such as, “That Man Drives Me Mad,” to her on target covers of Bessie Smith’s “Sorrowful Blues,” and Ruth Brown’s “Daddy Daddy,” she moans the blues as if from a tormented soul.

Other stand outs on Blueberries and Grits include her torchy, warbling cover of the Willie Dixon classic, “John the Conquer Root,” and the duet cover of “One of These Days,” with Reno Jack. Reno’s voice resurrects retired performer, Leon Redbone, and is as welcoming a sound as a dinner bell.

Our personal favorite, is the final track. A Gospel song written by long-time Clarksdale resident, Vincent, titled, “Come On In.” After all the drinking, man troubles and sinning the first 9 tracks examine, this is a simple reminder that, at the end of the day, salvation is as effortless was walking through the door.

The assemblage of musicians and singers on this album, reads like a catalogue of today’s finest artists. They include the aforementioned  pump organ played by Grammy winner Billy Earheart from the Amazing Rhythm Aces, Roger Reupert on trumpet, upright bass by Reno Jack, Dobro by Sturgis Nikides, Rickey “Quicksand” Martin on drums, April Mae on washboard, guitar tracks by Dave Fecca, Johnny Cass, & Robert Hughes, and backup vocals by Watermelon Slim and Mandy Lemons.

Sunday Wilde can hold her own among any of the top singer-songwriters today. She manages to project the style of a bygone era with fresh, relevant flair. Wilde not only embraces the explosion of today’s return to roots, soul and Americana, but waves it like a banner out in front of the parade. We believe that Blueberries and Grits, make for a fine meal, and will undoubtedly be served with multiple BMA nominations and a side of Grammy.