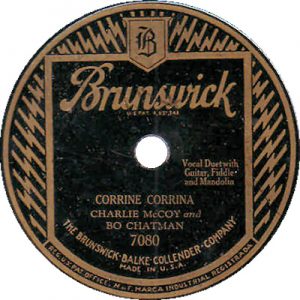 Various outlets including Rolling Stone magazine, have reported that the estate of Armenter “Bo Carter” Chatmon has filed a lawsuit against Eric Clapton in Nashville. The suit alleges that Clapton incorrectly credited the fabled musician Huddie “Lead Belly” Ledbetter as the writer of the song at issue, “Alberta” in the liner notes of the Unplugged album, released in 1992.

The Chatmon estate cited the 2011 live album Wynton Marsalis & Eric Clapton Play The Blues, wherein the song “Corrine, Corrina” is correctly attributed to Chatmon. In the performance of the song for the Unplugged, Clapton used the melody of “Corrine, Corrina” and replaced the title phrase with “Alberta,” the name of a song by Lead Belly. Quite possibly, this is where the confusion over correct authorship of the song originates. Rolling Stone notes that “Further complicating the situation is the fact that Carter briefly performed along the Mississippi Sheiks, who performed “Corrine, Corrina” with “Alberta” in place of “Corrine” in the lyrics. It’s this version of “Alberta” that Clapton covers on Unplugged and not Lead Belly’s.”

This lawsuit seeks $5 million over the mistaken credit not only from Clapton, but Warner Music Group, Rhino Music and Unplugged broadcasters MTV and Viacom as well. According to the American Society of Composers, Authors and Publishers (ASCAP) copyright database, as “Bo Carter,” had originally licensed “Corrine, Corrina” in 1929, as reported in the the Tennessean. The suit has been filed on behalf of Chatmon’s step-grandson Miles Floyd.

One outcome maybe that this suit is dismissed as “Corrine, Corrina” quite possibly was already in the public domain at the time of Clapton’s Unplugged performance. Billboard credits Clapton’s Unplugged as having sold more than 7.7 million copies. Rod Stewart was sued by the Chatmon estate in 2015 over a bonus track version of the song with an alternate spelling of the original tile as “Corrina, Corrina.” The track was included on his album Time, released in 2013. The suit was eventually dismissed, and Floyd’s agent, W. Patrick LeBlanc told the Tennessean that it was filled in order to make way for the current lawsuit against Clapton. “I’d just like for him to be honored for his work in the field and create some type of legacy that I can pass on to my kids and kids’ kids,” Floyd said.

Also speaking to the the Tennessean, Floyd’s lawyer Barry Shrum said, “This is a situation where you have the estate, the rightful owners of Bo’s intellectual property, just trying to get what’s rightfully theirs and get credit where credit is due. Bo created this song and started, in essence, a genre in music and influenced many performers in the future, and he deserves that credit.”

“Corrine, Corrina” has been performed and recorded by artists the likes of as Merle Haggard, Willie Nelson, Dean Martin, Taj Mahal, Jerry Lee Lewis, Big Joe Turner, and a host of others.

A representative for Clapton declined to comment on the suit.