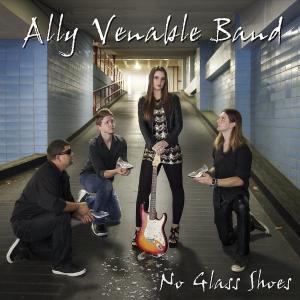 ‘No Glass Shoes’ by the Ally Venable Band and released by Conner Ray Music, is the debut album for this rising star.

The 17-year-old Texas female blues artist has a strong voice and a great range. We think she belts out impressively deep and powerful vocals, and her love for the blues totally shines through. Reaching over fifty years into the classic rock/blues past for inspiration and influence, Ally cites Jimi Hendrix, Stevie Ray Vaughan, Bonnie Raitt, and Joe Bonamassa among the blues experts she’s used to nurture her musical career. Latching on to the Fender Stratocaster as her instrument of choice will come as no surprise to any fan with the same influencers. Ally’s vocal characteristics make us think Debbie Davies a little bit. The guitar work is not on the Davies level yet, but clearly, she has a bright future as a vocalist and an instrumentalist.

Before the debut of No Glass Shoes, the talented young Houston native won the East Texas Awards Female Guitarist of the Year in 2015. For the last two years, she’s finished in the top ten of the under 20 categories at the Dallas International Guitar Festival. Barry Wallace on lead guitar/keys, 2015 Texas Bassist of the year Zach Terry, and self-taught drummer Elijah Owings makes up the rest of the band. They have been with her through much of her rising career.

Ally covers Bonnie Raitt with “Love Me Like a Man,” which is one of the only two covers on the album, the other being the Junior Wells classic “Messin with the Kid”.

The title track preludes with a bass melody setting the tone for the progression, and lends itself more toward the “rock side” of the blues-rock powerhouse that the Ally Venable Band is touted for.

The harmonica is prominently showcased in “Downhearted Blues,” which is one of our favorites on the new release. This one is sure to get the toes tapping with a euphonious rhythm, and a steady driving beat.

“Trainwreck Blues” picks up with a perky bass melody, leading into a classical blues chord sequence. Ally joins in with a sultry tone, and to us, it’s a pleasing vocal contribution that we think fans of female blues artist will appreciate.

It’s a quality body of work that offers inspiration and motivation for young, aspiring musicians. No Glass Shoes by the Ally Venable Band will not disappoint!

“My goal for this album is to really connect with people and let them know it’s OK to feel a certain way.” – Ally Venable

No Glass Shoes by the Ally Venable Band

Tracks: 8 tracks for a total of