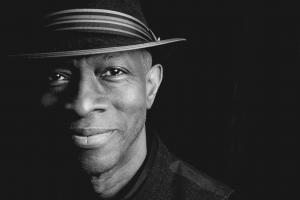 3X Grammy winning blues artist, Keb’ Mo’, is set to add another acting credit to his already impressive resume’. On February 19th, he appears in the film series, Signed, Sealed, Delivered on the Hallmark Movies & Mysteries channel. In an episode entitled, “Higher Ground,” Keb’ Mo’ plays the character of Gabe, a man who lost everything in Hurricane Katrina.

Although one of his first in-depth acting roles, Keb’ Mo’ is no stranger to the stage, as well as screens both big and small. In the early 90s, he appeared in several versions of the musical play, Spunk. He has since had roles in the films, All the King’s Men, Honeydripper, and the documentary, Can’t You Hear the Wind Howl? The Life & Music of Robert Johnson, in which he played the legendary Johnson himself. On the television side of things, he’s performed in Promised Land, The West Wing, Memphis Beat, and the amazingly popular, Touched By an Angel.

Among his musical credits, Keb’ Mo’ has composed and performed songs for the television shows, Mike & Molly, Boston Legal, and Deadwood, among others. His music has also appeared on film soundtracks for Tin Cup, Happy, Texas, One Fine Day, Holes, and many more.

It may have been his roles, on Touched, as Isaac, and J.D. Winslow, that landed him the part in Signed, Sealed, Delivered: Higher Ground. Touched By an Angel‘s Executive Producer, Martha Williamson, is also the creator of the this current movie series. The films focus on four postal workers who take it upon themselves to track down intended recipients of undeliverable mail. Keb’ Mo’s character, Gabe Recolte, is a New Orleans handyman and blues singer/songwriter. Left homeless in the wake of Katrina, he missed his chance to express his love to a local club owner (Hattie). The team retrieve Gabe’s love letter, years later, and face challenges in solving the mystery. The film weaves together themes from several Keb’ Mo’ songs into a beautiful story of love, and loss.