Language of the Blues: TERRAPLANE 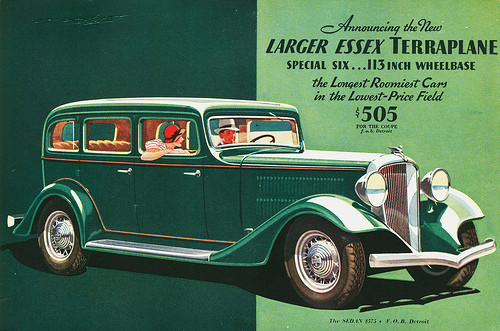 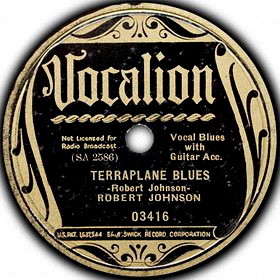 Robert Johnson was only twenty-seven when he died in 1938, but he left behind twenty-nine amazing songs. During his lifetime, though, Johnson had only one minor hit, “Terraplane Blues.” Johnson recorded that song along with the more enduring “Sweet Home Chicago,” “I Believe I’ll Dust My Broom,” and “Come On In My Kitchen” in a San Antonio, Texas, hotel on November 23, 1936.

Although “Terraplane Blues” was not the sort of uptempo tune that was popular in Johnson’s day, it sold modestly well, because it referenced a very popular car made by the Hudson Motor Company. Produced between 1932 and 1938, first as the Essex-Terraplane and then simply as the Terraplane, it was affordable, yet sleek and powerful.

Johnson’s recordings scarcely made a dent in the sales of the far more popular blues artists of the day, such as hokum star Tampa Red, Leroy Carr, and Lonnie Johnson. Nonetheless, it’s Johnson’s songs that have become not only enduring blues standards, but formidable rock songs. “Cross Road Blues,” “Sweet Home Chicago,” “I Believe I’ll Dust My Broom,” “Rambling on My Mind,” “They’re Red Hot” and “Come On In My Kitchen” are just a few Johnson classics interpreted by major recording artists like Cream, The Rolling Stones, Led Zeppelin and the Red Hot Chili Peppers. 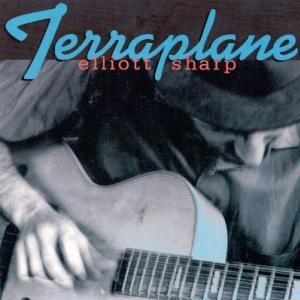 “When I first heard the Robert Johnson song ‘Terraplane Blues’ back in 1969,” Sharp told me, “the combination of the power of the music and the strange title compelled me to find out what a Terraplane was. This name also appealed to my longstanding interest in science fiction. The combination was unbeatable: fast car, futuristic vibe, sexual metaphor, and a killing song. I held the name in my mental reserve for years for the time when I would finally form a blues band.”

Although Sharp is known for a wildly creative and intellectual approach to music that includes experiments like tuning his guitars to Fibonacci sequences, he has listened closely to blues greats like Muddy Waters, Howlin’ Wolf, Lightnin’ Hopkins, and Sonny Boy Williamson. “The blues is a universal feeling,” Sharp observed. “I find that even if I’m working on a computer-processed string quartet, I like it to have some of that feeling. I’ve been playing guitar for more than thirty years, now, and I played blues since I first began playing the guitar.”

After releasing Terraplane, Sharp added blues/gospel singer Queen Esther to the group. When Sharp learned that she had sung with legendary blues guitarist Hubert Sumlin in Texas, Sharp arranged for Sumlin to perform with the Terraplane band at the Knitting Factory in New York City. This began a fruitful partnership that led to Sumlin playing on additional Terraplane CDs, and being introduced to a slew of admirers among NYC’s downtown music scene.

I first met Mr. Sumlin at a benefit for injured rock and jazz drummer Sim Cain at the downtown jazz club Tonic on New York’s Lower East Side. Sumln was 73, and told me: “That feels good to me [to have the respect of younger artists]. I like to play with other people. Music has no bars. All music sound good. I listen to every kind of music in the world and I done been all over the world.

“I done played with everybody in this nation that play an instrument,” Sumlin continued. “We set down and get this stuff together. The blues does this ’cause it’s saying something. What people talk about in it is true. Muddy Waters and Wolf–lemme tell you something, them guys lived what they sung about. They lived the life, and told it like it was. Long as it’s true, people can get it.”

Get a signed copy of The Language of the Blues today!