What Happened To Janis Joplin’s Porsche? 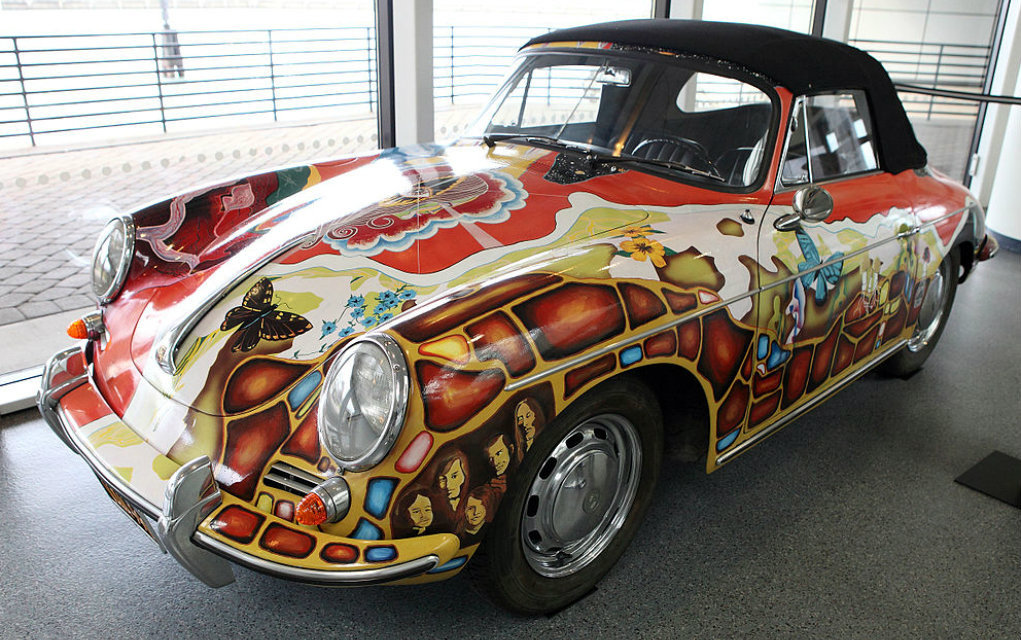 The story behind Janis Joplin’s 1964 Porsche is as eclectic as her in-your-face music and clothing. At a time when rock stars were dolling out big money for their cars, Joplin paid just $3,500 for a 1964 Porsche 356 C Cabriolet from the Beverly Hills dealer Estes-Zipper. When she bought the car, it was a dull Dolphin Grey, one of nine colors available at the time. Joplin would soon change that.

Joplin’s roadie, Dave Richards, was given $500 and a bumper-to-bumper canvas. The result is what he called The History of the Universe. In the psychedelic fashion of the time, Richards painted images of Big Brother and the Holding Company, California landscapes, the Eye of God, Janis’ astrological sign (Capricorn), skulls, mushrooms, butterflies, and more. A final layer of clear-coat would prove to be a wise move.

Janis drove her beloved Porsche every day. It was so recognizable that fans would often leave notes to her under the windshield wipers. During a 1969 gig at the Winterland Ballroom, Joplin’s Porsche was stolen. Recognizing his error, the thief began spray painting over the mural. He was unable to finish the job before the car was recovered by police. With the help of a body shop, Richards was able to remove the offending paint from the clear-coat with little damage to the artwork.

On October 4th, 1970 Joplin failed to appear for a recording session at Sunset Sound. Concerned with her absence, road manager John Cooke drove to the Landmark Motor Hotel in Hollywood, where Janis had been staying. Pulling into the parking lot, he noticed her Porsche parked in the garage. Upon entering her room, Cooke found Joplin, dead from a heroin overdose on the floor beside her bed. She was just 27 years old.

Following Joplin’s death her manager, Albert Grossman took possession of the Porsche. For over two years he used it a courtesy car on his estate. Eventually, the car fell into disrepair, and in 1975 Grossman returned it to Joplin’s family.

Janis Joplin’s siblings, Laura and Michael, received the car back from Grossman, with Michael using it as a daily driver. Living in Ohio, Michael Joplin rebuilt the original engine, but the next few years showed wear on the paint job. The Porsche 356 C being a much sought after vehicle, Michael began restoring the car, including the original Dolphin Grey paint.

In the 1990s Joplin’s siblings decided to return Janis’ Porsche to its psychedelic glory. They commissioned artists, Jana Mitchell and Amber Owen to replicate The History of the Universe mural work. The two artists used dozens of period photographs and recreated the one-of-a-kind paint job.

Since the recreation of the artwork, Janis Joplin’s Porsche has been on display in several museums. Its longest stretch was the twenty years it spent at the Rock and Roll Hall of Fame and Museum in Cleveland, Ohio.

In 2015, Joplin’s heirs once again took possession of the Cabriolet, offering it at auction. The family had plans to use the money to support charity programs in their sister’s name. It sold on December 10th, 2015 at RM Sotheby’s “Driven By Disruption” sale in New York City. While it was estimated to sell at between $400,000 and $600,000, the winning bid came in at $1.76 million breaking all previous records for the sale of any Porsche 356 sold at public auction.

As usual, Sotheby’s would not disclose the name of the buyer, nor did they come forward at the time. In September 2016, Tim Collins of WBCK Radio reported the owner was a woman who purchased the car as a 60th birthday present to herself. The report also stated that the owner is in the Kalamazoo/Battle Creek, Michigan area. Viable information as the Porsche has been displayed at the Gilmore Car Museum in Hickory Corners, Michigan in October 2016 and, most recently in May 2017.

Would you pay that much for a star’s car? What would you do with it if you owned this rolling work of art? Let us know in the comments below.