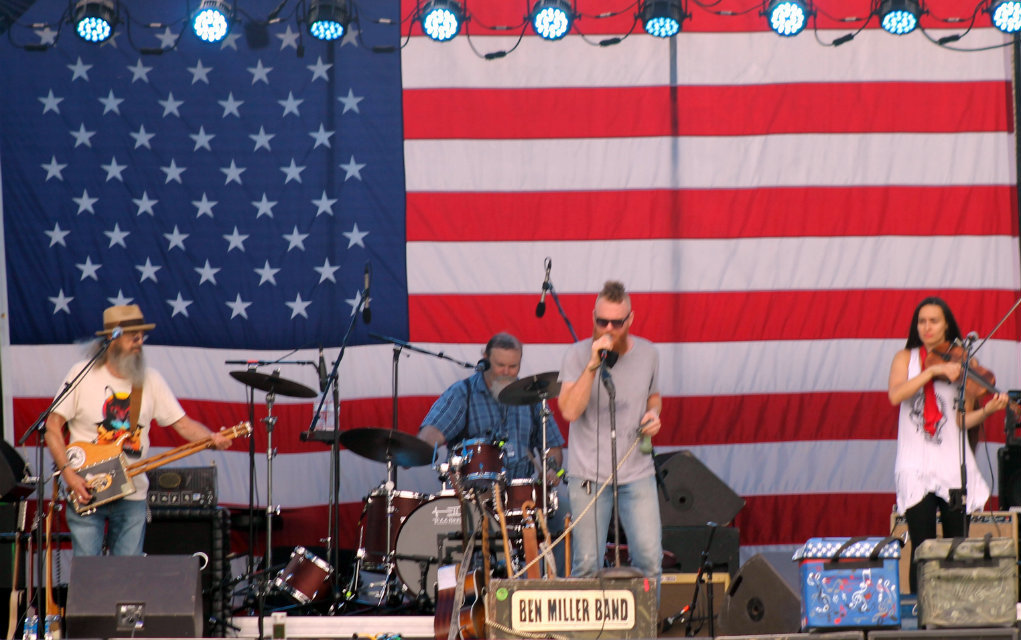 Blues fan looking for the perfect Music or Blues Festival in Kansas? The pros at ABS have made you this Top Five blues festival guide to discover Kansas Blues Festivals with the best live music lineups, vendors, arts, food, and attractions.

Smack dab in the middle of the country, they know how to celebrate Independence Day. For the last eight years the Topeka Blues Society has done so by hosting the Spirit of Kansas Blues Festival. Combining local talent with internationally renown performers has kept this Midwest festival fresh and vibrant, year after year.

Just a few of the alumni acts include Samantha Fish, Hamilton Loomis, Tas Cru, Southern Avenue, Anthony Gomes, and Duke Robillard. Some years the line-up is so large that a second, acoustic stage is set up to accommodate all the performers.

Taking place on the banks of Lake Shawnee, this one-day event is absolutely free to the public. The music starts at noon, and continues until dark when the City of Topeka’s largest fireworks display lights the sky. The lake also provides opportunities for swimming, boating, or just lying on the beach a stone’s throw from the music.

Everything in the Capital City is only minutes away, including hotels, restaurants, and the NOTO Arts District. We suggest you stay in town a while and take in a show at Uncle Bo’s Blues Bar located in the Ramada Inn Hotel downtown. The festival site does have ample parking which attracts food trucks galore while the show is underway.

As with most outdoor events, blankets and folding chairs are permitted. Shade tents are also allowed here, as they keep a section open just for them.

Blues Masters at the Crossroads

Some may question who all have played here over the last 20 years? A better question would be who hasn’t. Blues Masters at the Crossroads is exactly what the title implies. Masters of the craft gather in Salina, Kansas to perform, and sometimes record at a nearly century old venue.

Blue Heaven Studios was founded by Chad Kassem, who had purchased the deteriorating First Christian Church in 1996. The massive cathedral-like church was dedicated in 1927, and is near acoustically perfect. After tons of renovation, the first live performance was by Jimmy Rogers in 1997, and the first recording by Jimmie Lee Robinson the following year.

Since then, dozens of blues men and women have traveled to play the autumn event. A roll-call of performers sounds like a who’s who of blues, soul, and zydeco. Honeyboy Edwards, Bobby “Blue” Bland, Pinetop Perkins, Henry Gray, Barbara Lynn, Rory Block, C. J. Chenier, and Buckwheat Zydeco are just a handful of legends who have graced the former church.

Blues Masters at the Crossroads is a two day event, with the music beginning in the early evening. In recent years, the organizers have scheduled one night at Blue Heaven, and the other at Salina’s famous Stiefel Theatre. Tickets are around the $60 mark, but for this grouping of talent, we’ve heard no complaints.

Blues Masters at the Crossroads

The tiny town of Paxico, Kansas is famous for two things: antique stores, and their annual blues festival. Always held on the third Saturday in September, the population of the town swells from 200 into the thousands.

14 years ago the one-day festival was first organized by Marvine McKeithen and Bud Hund. Marvine, a Paxico native, moved back to her hometown after years of owning Club Paradox in Kansas City. Local merchants and donations fund the event at her insistence that it be free to attendees.

As the population swells, the music kicks off from a stage set up right downtown. Vendors set up near the open antique stores providing food and refreshing drinks to concert goers. Those wanting a rustic experience can camp at the Mill Creek Campground. More citified accommodations are located just a few miles away in either Topeka, or Manhattan.

Artists including Trampled Under Foot, Josh Hoyer & Soul Colossal, DC Bellamy, and Cassie Taylor have wafted their music over Kansas’ Flint Hills. It’s no wonder blues fans come from all across country to attend. 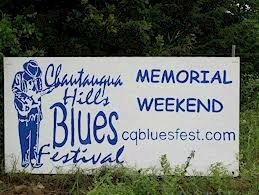 The first festival of the year in Kansas is the Chautauqua Hills Blues Festival. The event is held on 100+ acres of land NE of the town of Sedan, near the Oklahoma border. Free camping is encouraged as some of the highlights of the CQ Blues Fest are the closing jam and post-performance bonfire.

Community supported with an all volunteer staff, all proceeds from the event benefit the children of Chautauqua County, including the local Blues in the Schools program. On Saturday, the music begins in the town of Sedan, with youth bands in Hollow Park, and an acoustic night at the Gregg Theatre. On Sunday, the festival moves to the CQ stage where the music begins in the early afternoon.

The staff carefully chooses the artists to perform. Most of them are BMA or Blues Blast Award winners, IBC champions and the like. Last year’s event boasted Brody Buster, Danielle Nicole, and Victor Wainwright among several others.

The gorgeous surroundings and proximity to Wichita, Tulsa, and Joplin make the CQ Blues Festival a must-attend event. Just remember to pack your tents, grills, coolers, and chairs.

Jammin’ in JC is a feast for the ears, and the taste buds. Held at Heritage Park in downtown Junction City since 2011, it’s as much about the food as the music. At last year’s festival, 35 BBQ grilling teams from Kansas, Missouri, and Oklahoma registered to compete in the Kansas City Barbecue Society (KCBS) sanctioned event.

To help wash down all that deliciousness, there’s Texas-style blues on Friday evening, and all afternoon/evening on Saturday. Jammin’ in JC takes pride in presenting local, regional and national acts. Several business sponsors keep the event free to the public.

Junction City is just off I-70, with camping, lodging, and other amenities within driving distance. Historic Ft. Riley is located nearby where one can visit the US Cavalry Museum, the First Territorial Capitol of Kansas, and the Custer Home.