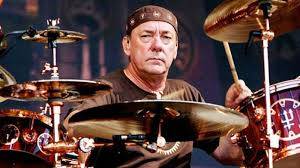 I am very sad to announce that Neil Peart died in California this past Tuesday, January 7, due to complications from brain cancer. He was 67.

Peart made his debut with Rush on the 1975 album Fly by Night. He stayed on as a prized drummer and primary songwriter, writing songs such as “New World Man,” “Subdivisions,” “Spirit of Radio,” “Limelight,” “Freewill,” and “The Trees.” Not only did he write those philosophical lyrics, but he played consummately to the respective emotion of each song behind his colossal double drum kit. When I think of drummers who are also songwriters, I realize that he is unparalleled.

Rush released this statement today: “It is with broken hearts and the deepest sadness that we must share the terrible news that on Tuesday our friend, soul brother and bandmate of over 45 years, Neil, has lost his incredibly brave three and a half year battle with brain cancer. We ask that friends, fans, and media alike understandably respect the family’s need for privacy and peace at this extremely painful and difficult time. Those wishing to express their condolences can choose a cancer research group or charity of their choice and make a donation in Neil’s name. Rest In Peace, brother.”