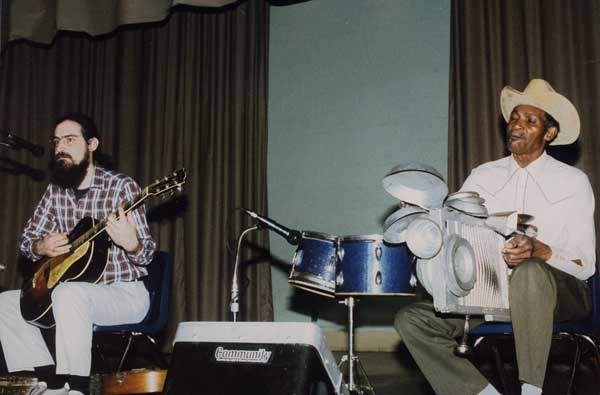 Everybody pays lip service to the blues influence, and “unplugged” is a marketing ploy. Ted Estersohn has been playing down home blues for more than 50 years. While holding on to his deep blue roots, he has also developed a unique jazz guitar style; playing bass, rhythm, and lead simultaneously. He has played with Washboard Slim (Robert Young), Son House, Bonnie Raitt, Mississippi Fred McDowell, Mance Lipscomb, Rosalie Sorrels, and John Jackson. Ted ran WXPN’s Folk department while in college.

How did you get into Blues and who are your favorite artists?

I grew up in the 50’s with ‘The Weavers at Carnegie Hall.’ I can’t remember not knowing Pete Seeger, Woody Guthrie, Josh White, and Led Belly. When the folk revival hit, I was primed as I studied with Jerry Ricks when I was thirteen. He was great friends with Mississippi John Hurt and Doc Watson. That was the core of my syllabus and gave me the opportunity to meet people. I also really like Mississippi Fred McDowell.

Who have you studied and played with?

I was in a peculiar situation during the “Great Folk Scare of the 60’s” in that I was studying with Jerry Ricks. When I met people, I already knew something about their playing style and repertoire. I could meet Brownie McGhee or Fred McDowell and just hang without needing to go, “Hey man, how’d you do that.” I took a lesson from Reverend Gary Davis at his sister in laws house in north Philly when he was in town for a gig. He was a teacher and I paid a fee. He would repeat parts until you had it down. He would sit down and talk about spelling your chords. That’s the way he phrased it. Fred McDowell is still a major inspiration. He wasn’t a teacher. It wasn’t in his personality. He only said two things to me about my playing. The first time I mustered up the nerve to play in front of him he told me to keep my thumb moving. The last the time I performed with him he said a lot of people can play but you have to get your own words. That was the only overt instruction I received from him. He is as influential on my playing as anybody.

Can you talk about Fred McDowell?

In May of 1971 I backed Fred for three nights which consisted of six sets. Saturday afternoon we took him out to The Swarthmore Folk Festival and he was on a bill with Happy and Artie Traum when they had a five piece band. My teacher Jerry Ricks played with Fred that Saturday afternoon. On Saturday night we went to a club called Buck Dancers Choice and celebrated Reverend Gary Davis’s 75th birthday. Taj Mahal, John Davis, Danny Starobin, and Fred were jamming. I was nineteen years old and beat. I was getting run ragged by old men. Gary Davis and his wife were sitting on the side of the stage politely listening and left when they were tired.

Playing guitar with Fred was a real trip because he did so many solo guitar genius things where he would speed up and change the dynamic on the fly. He would do those little two bar vamps but he would do them twice or he would do them five times. I managed to stay with him. I have heard other concert tapes from England where it sounds to me like he’s trying not to throw the lads off. He was playing with bass and drums. When I listen back when I played with him he sounds a whole lot freer. He trusts me to stay with him and go where he’s going. There were other things from World Control Studios where I tried to be the hot lead guitarist and I find those very embarrassing. I studied his playing for six years before playing with him and I just tried to stay with him. If he went high, I went low. If he went low, I went high. I stayed with him but behind him. I am really proud of that. It went really well.

I played with him privately at Dick Waterman’s apartment. It was a very weird experience. Son had a drinking problem. Dick asked me to pick him up at the airport and stay with him. Dick managed Son, John Hurt, Bonnie Raitt, Buddy Guy and Junior Wells, Fred McDowell, and on and on. Dick was on the road with Robert Pete Williams and the following day they were going to swing through to pick up Son and go to Pittsburgh. I brought my guitar thinking it was my time to learn something from Son House. He just wasn’t in the mood. Later in the night out of frustration I picked up the guitar and started playing his stuff and he started singing along. It was as much of a spiritual experience as it was a musical one but I did play with Son House.

Can you talk about running the Folk Department for WXPN?

I entered college as a seventeen year old freshman as I had been listening to them since I was in high school. I joined the station as my buddy Hoyle Osborne ran the Folk Department. This was in the late 60’s. He dropped out of school and I became the head of the Folk Music Department until my sophomore year when I dropped out of school. I supervised between thirty five to forty hours a week during the afternoon and shorter evening time slots. I was not on air for all the shows. We played Bluegrass, Old Time Country, and Blues. Shows were divided by category. It was great as there was a huge recorded library to trip around in and find other cool things that I didn’t know about or only knew by legend. We also went out and recorded. We did live shows with Doc Watson and Dave Van Ronk. I taped Muddy Waters at the old Electric Factory.

Unfortunately, the station has lost track of these old tapes and interest in them. I believe I could track them down if given motivation. I tried to get WXPN interested in their old tape library because I am one of a few people who knows what’s on the tapes. It was not in their possession and for a while I knew where it was. I offered to try and fundraise fees if they would provide their facilities to me to digitize and annotate the recordings. They were not interested. The last keeper of them was talking about donating them to the Library of Congress which is a good place for them.

Here’s a good WXPN story and the tape is probably off in limbo somewhere. I once went on air with Buddy Guy at WXPN. I brought my acoustic guitar and he played it and we talked. I am a lousy interviewer and the music parts were much better. A.C. Reed was there and said he was going to give me a little bit of his brother Jimmy. A.C. Reed was a Blues saxophonist who played with Buddy until 1977. Buddy starts playing the guitar and A.C. started singing his best Jimmy Reed imitation, “You got me running, You Got Me Hiding”. This was a running gag. He was not related but it was really funny as he could do a great Jimmy Reed imitation.

Can you talk about Washboard Slim and his washboard drum you donated to the Smithsonian?

I had heard about him in the 60’s but I didn’t meet him until the early 80’s. I started playing with a band called The Wild Bohemians which is still going strong and we do Mardi Gras in Philadelphia. We just did our thirty sixth Mardi Gras which I believe is the official count. At the beginning, we had two brilliant folk percussionists: Washboard Slim aka Robert Young and Horace “Spoons” Williams. Slim had this amazing washboard. He bolted two washboards together and put a plank down what you would think of as the side and sat on it. He could play with two hands and attached frying pans, pot lids, a cowbell, and a woodblock. He had a stove bolt in one hand and thimbles on his fingers on the other hand. He had a set of roto toms and other stuff on the side. Throughout the 1980’s, when he was in his eighties, we would play Mardi Gras gigs and other gigs as a duo. We played elementary schools, city parks, and bars. Slim is not to be confused with Washboard Sam who was also on the scene and was Big Bill Broonzy’s brother in law. Washboard Slim recorded with Brownie McGhee. He was recording with Brownie McGhee before Sonny Terry. He’s on the first Sonny Terry and Brownie McGhee record. In the eighties I was the favorite guitarist of Brownie McGhee’s favorite washboard player. I am proud of that one.

When he died his brother in law gave me his washboard. I had it for about seventeen years until I finally found a curator named Gary Sturm from the Smithsonian. It sat in my closet and now it sits in the Smithsonian’s closet but at least it is secure. I delivered it to the Smithsonian and I swear to God I left it on a table next to the 1683 Ole Bul Stradivarius Violin.

My new trip is my banjo. For the first time in my life I have a five string banjo. I have a Vega Tubaphone Tenor Banjo from 1926. I had a five string neck made for it. Throughout my teens and twenties there was always a five string banjo around the house, but I never owned one. I also have a banjo mandolin. Right now I am catching up on learning Scruggs picking. I was sort of competent with old time banjo but never learned Bluegrass banjo. That is my current excitement. I have creeping arthritis in both of my hands and I need something new to excite me that is less stressful than playing full chords on a guitar. So far it’s working.