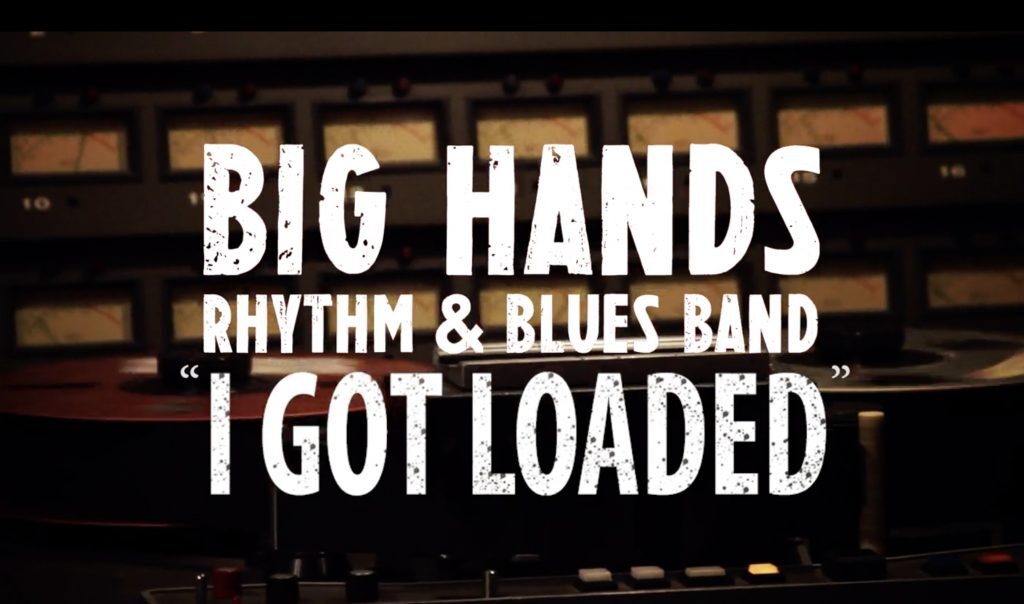 Big Hands Rhythm & Blues Band is back with a swinging new single, bringing their signature style to the spirited classic tune “I Got Loaded.” 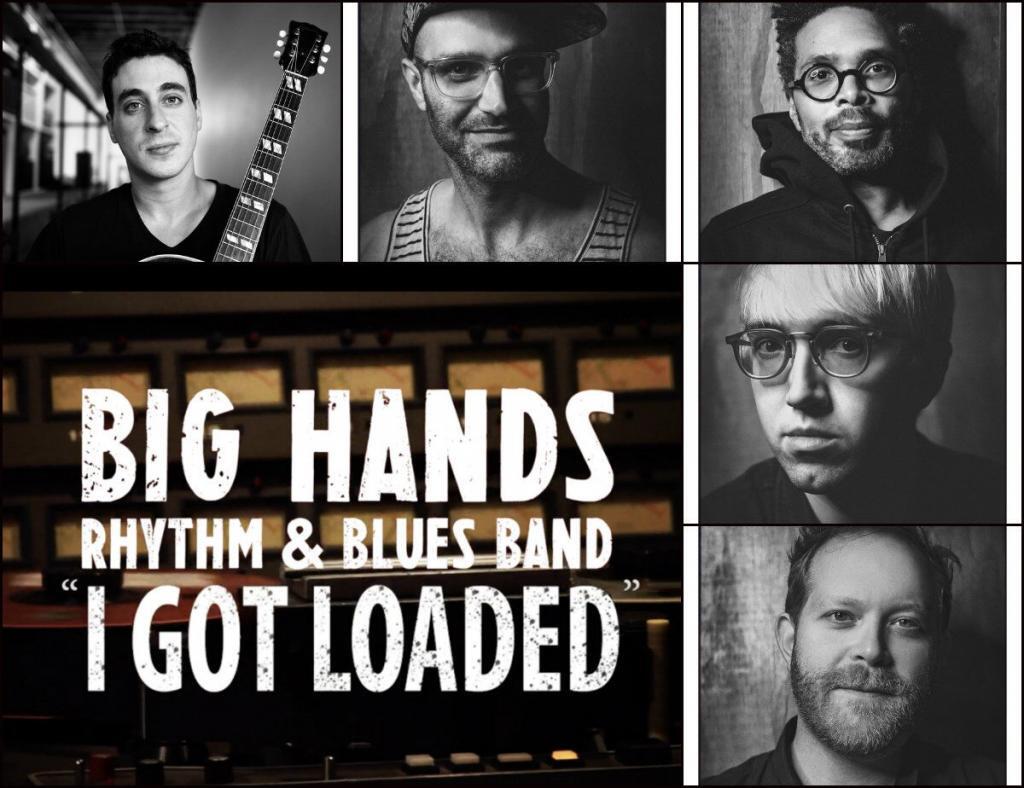 “I Got Loaded” features Osei Essed behind the mic, where he lets loose on the lyrics in a joyous shout. Joining the party – or afterparty, given the song’s story – are the band’s founder and guitarist, Simon Kafka, bassist Andy Hess, organist Brian Mitchell (subbing for the band’s regular bassist and organist, Chris Kuffner and Todd Caldwell, respectively), and Zach Jones on drums. The band’s decision to film the video in the recording studio brings fans into the heart of the festivities, putting on display the contagious energy that pours from every performance by the Big Hands Rhythm & Blues Band.

“I Got Loaded” is the latest in a collection of music by a band that combines the bluesy, R&B authenticity of Chess Records era legends such as Howlin’ Wolf and John Lee Hooker with punk and garage rock icons such as The Sonics and MC5 known for leaving it all onstage with each performance. Made up of a group of working and touring musicians who have created music for screen and stage as well as played with the likes of Sting, Elle King, Lesley Gore, Ingrid Michelson, and Graham Nash, the band brings together phenomenal talent from a diversity of musical genres.

We spoke to both Essed and Kafka regarding the song, their personal influences and more.

How long has Big Hands Rhythm & Blues Band been a band? I understand the group is made up of former sidemen from other acts. What brought you all together?

A few years now! I had just gotten off a long tour playing guitar for a pop artist named Elle King, I had spent two years more or less traveling around the world playing her music and had always dreamt of starting my own project. I was out with Zach Jones and Chris Kuffner (drums and bass for the band) at a show in New York, and was telling them about it – and that I just needed the right singer. Right then and there Chris called Osei and that was the beginning.

Like Simon said, he reached out and I was down. Kuff (our bassist) and I have known one another for a good long while. He’s subbed many a time for my other song writing/performance project The Woes. I suppose he intuited that the collaboration would be a joyful one.

Is it true that you first discovered “I Got Loaded” on a Lil’ Bob and the Lollipops record? Several other bands have covered it (Los Lobos, Tab Benoit, Robert Cray, etc), and I was wondering if it was a song perhaps you’d heard before and then tracked down Lil’ Bob.

I’d never heard the tune till Simon sent it to me.

Yes! I was record shopping in New Orleans and picked up a Lil’ Bob record. I had actually never heard that song up until then. I love them. It’s full of amazing songs.

Is “I Got Loaded” the first single from a new album project?

We have another original song coming out on the soundtrack of a film that was set to premier at Tribeca – and we have tons of ideas kicking around for another recording which we will do hopefully soon depending on world circumstances.

It’s a strange world for albums – its’ great to have a collection of songs that make their way into the world all at one time but a lot of the music we’re inspired by came in fits and bursts. If anything is certain it’s that we’ll make more songs and keep foisting the joy we get from doing so onto other people with abandon. I suppose that’s the long answer.

If this does turn into a future album, do you see it being a combination of originals and covers? Thoughts and Prayers was terrific and all original, but your self-titled album was off the chain great as well.

Thank you for enjoying our records! Osei wrote a new and original bridge for our version of “I Got Loaded” – so even when we do old songs we try and find a way to make them our own. I would say we try and make 80% of the show original-and hopefully – if we do a cover it’ll be obscure enough that almost no one has heard it.

We’re all looking forward to being in a room making the air shake again.

Other than your band’s listed influences, who else are major influences on your music?

I can’t recall what our listed influences were when we were first finding one another musically. In some way that list exists as a guidepost for us to remind us of where we best stand together – that’s by way of apology in case I repeat some of those same influences now. Lately I’ve been listening to a lot of old Toots and the Maytals, Lightning Hopkins, Willie “The Lion” Smith, Thelonius Monk, Lucinda Williams, Sister Gertrude Morgan, Courtney Barnett, Bela Bartok, Brian Eno and The Minutemen. Mingus is a perennial favorite. I’m a fan of most things with at least a bit of chaos at the edges.

I’m currently obsessed with Lonnie Johnson and Hound Dog Taylor. But also I have a deep love of lots of indie and popular bands. I’ve had a long obsession with Radiohead for example.

What music made you want to become a musician in the first place?

When I was eight I moved into a house where my college aged cousin lived in the basement. He played guitar pretty loudly through one of those old Kustom Amps. I thought he was hot shit for sure – he was a very cool dude. He gave me my first few tapes and records. ‘Jimi Hendrix Smash Hits,’ ‘The Monkees Greatest Hits’ (both on vinyl) and The Police ‘Synchronicity’ on a dubbed cassette tape. Maybe it should be deeper than that but it was really just that the first time I listened to music on my own I knew I wanted to be a part of it. That and wanting to be as cool as my cousin.

Unfortunately not – although we’ll see what the future holds. Yes – we had a tour to Moldova and Russia fall through-but fingers crossed it happens later in the year.

We’re all sheltering in place and as we don’t all live together it would be really difficult to pull the blood up out of our veins the way we do when we play live in a remote performance with any measure of success. We’re all chomping at the bit though! When science says we’re good to go we’ll all strap into our dancing boots.

All I want is this band and our music to bring people cathartic joy. I think it’s working – people lose their minds at our shows – I’ve seen it happen over and over. It’ll start kind of stiff in the audience and 45 minutes later people are dancing, sweating and smiling.

We have no secrets that I know about.

The song and video, set for release tomorrow, April 30th, were recorded in Studio G, the rehearsal-space-turned-recording-studio housed in the heart of Brooklyn. It’s a venue that’s been used over the years by artists from Joel Hamilton and Beck to the Black Keys and the Plastic Ono Band, and the comfortable and creative environment proved to be the perfect setting to lay down a song about kicking back and unapologetically having fun.