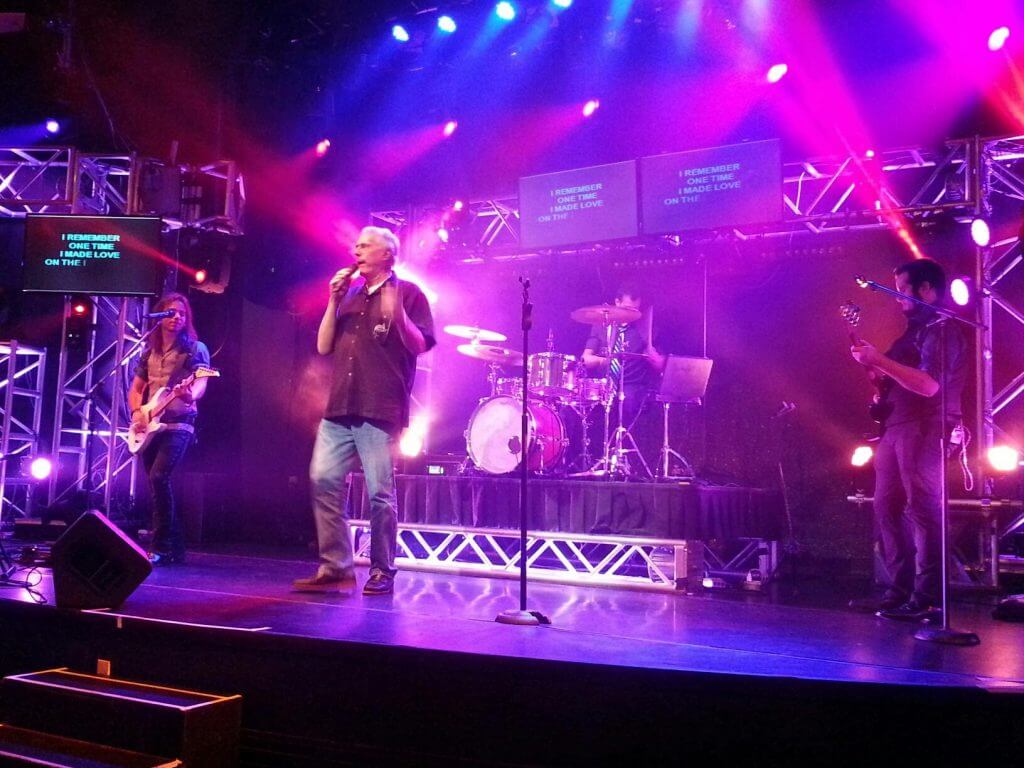 Born in Shamrock, Texas, Buc Weatherby was raised half a block away from historic Route 66. He attended college at Southwestern State in Weatherford, Oklahoma. He worked his way through college by playing drums in a band called The Velvets, co-founded with guitarist Ray Price. The band played clubs and military bases all over Oklahoma and Texas. Buc recorded his first record, “White Bucks and Look At Me,” at Norman Petty Studios in Clovis, New Mexico. After college, Buc pursued a radio career.

For thirty-eight years, Buc managed radio markets in Oklahoma City, Wichita, Kansas and Jacksonville, Florida. After Buc’s dad passed away he moved back to Shamrock to take care of his mother. Serving as mayor of Shamrock for ten years, working with Route 66 media and doing karaoke shows, Buc Weatherby is still active as ever. His retired motto is: “If it ain’t fun or interesting, don’t do it. However with all my years in broadcast and entertainment, doing the Uncle Buc Plays The Blues show is right up there. It’s quite a thrill hearing from listeners from all over the world.”

I was raised in Texas and I have always liked Blues. Country and Western music was a thing when I was a kid. My dad and I used to listen to Lefty Frizzell and guys like that. When I entered high-school, I was into early Rock and Roll which basically was a brand of Blues. I probably had the first Little Richard record in my part of the country. I used to listen to a station late at night out of Fort Worth, Texas called KCUL which is luck spelled backwards. There was a song called “I’m Going Down To Tijuana” by Andre Williams. I would order records out of Fort Worth.

In college I started a band in my hometown of Shamrock, Texas. In college I scouted around for a guitar player. The guitar player was from Burns Flat, Oklahoma. He liked Elvis, Chuck Berry, and Jimmy Reed. I told him I listened to Jimmy Reed all through high school. I made my way through college sitting on a drum stool and I played clubs around Oklahoma where I was going to college. We played all kinds of music, but it slanted towards Blues.

Out of college I began working in radio and I was still playing clubs around Oklahoma City. I’ll be darned if the Beatles didn’t come out around that time. A lot of early Beatles songs were old Blues songs that we were already playing. That’s how I got into Blues and I have always loved it. I managed radio stations for thirty-seven years after figuring out I was better at marketing and management. I managed stations in Oklahoma City and Wichita, Kansas. From there I went to Jacksonville, Florida. I was there for sixteen years in station management. I came back to my little old town Shamrock, Texas when my dad developed cancer and I promised him I would take care of mom. After he died, I couldn’t get mom to move to Florida, so I stayed in Shamrock.

I started doing Karaoke and writing work for a group that had some Chevrolet dealerships. They owned some radio stations and asked me if I wanted to be a part of it. I told them I hadn’t worried about paying radio station bills for a long time. I told them I would help them out, but I was not going to be a financial partner. One of the stations played Classic Rock and the other stations were mostly Country. The owner of the group asked me if I would do a Blues show on the Classic Rock station. He wanted me to record six episodes and put them on the air to see what would happen. That is how ‘Uncle Buc Plays the Blues’ started.

It has been amazing. After the show gained a local audience, we put it on the internet, and it has just been amazing. We get a lot of response from Europe and a lot of Blues musicians are listening to the show. A guy name Greg Copeland got in touch with me who is from Germany and is singing Blues and has several albums out. A lot of people like that have picked up on the show. On one of my last episodes a guy got in touch with me via Facebook and told me that he and Tomiko Dixon, Willie Dixon’s granddaughter, were doing their best to keep Blues alive in Chicago. We did a show together and she was the co-host. We played all Willie Dixon music. The show received great response.

What kind of preparation goes into your show?

I have a library that has grown to over three-thousand songs. Nobody is telling me what to do. I need to like the song and I have to think my audience will like it. That is the criteria. I call it an hour-long show, but nobody is watching the clock. It may end up going for an hour and a half. My show has a structure. I try to open with something that is a little upbeat by a known artist and I try to play something the listeners will really get into even if they aren’t Blues fans. I have a featured artist each week. I talk about the artists’ history and play a few of their songs. I have another feature called ‘Then and Now’ where I take a well-known Blues song and play a current version of it. Albert Cummings is a good example and he covered “Little Red Rooster.” I will do a double dose of the Blues where I play two in a row. I play a couple of good Blues songs back to back after I do my features. When doing an hour long show I can play the creme de la creme so to speak. I also do encore shows if a show gets a big reaction. Somewhere down the line I bring it back and play it again. I do an outline each week and mold it together. Back in the day when I was an announcer, we would go into the record library and pull our own music. When I was running a band, I called the songs and I watched what people were dancing to. Watching helped me when picking songs for radio.

Can you talk about Texas Blues versus other kinds of Blues?

I make a big deal to play all kinds of Blues. I talk about Chicago Blues, New Orleans Blues, California Blues, and even East Coast Blues. I talk about people like Tommy Castro and Charlie Musselwhite. Since I broadcast from the crossroads of America, I have to play Texas Blues. I did a Stevie Ray Vaughan tribute show. I play people like B.B. King, Jimmie Vaughan, Bonnie Raitt, and Eric Clapton. A lot of these people sang SRV songs on the tribute show. This coming week the featured artist is Gary Clark Jr. who is from Austin, Texas. Delbert McClinton, Angela Strehli, Lightning Hopkins, T-Bone Walker, and Johnny Winter are all from Texas. Texas Blues has a pretty good history. Of course, Stevie Ray Vaughan gets a lot of credit for taking Texas Blues and giving it to the world. Another guy who did that was Johnny Winter.

Best and worst on air experience?

I will answer that question. One of my worst experiences was when I was a high school kid and working at the local radio station which was an AM station called KEVA 1580 in Shamrock, Texas. The first announcer on that station was a guy named Bill Mack. He really made his mark in Country Music. They called him the midnight cowboy. He started where I started. There were five of us who started at that station who ended up becoming professional broadcasters. I was brand new. In those days, commercials were on a record or an eight-track tape. One day after the news segment was over, a buddy of mine called me and I did not turn the mic switch off. He asked how I was doing and I let loose with expletives I am ashamed to repeat. My dad was listening. That was one of my worst radio experiences. I have had a tremendous number of great experiences and I have managed stations for close to forty years and I worked with great people. Doing my Blues show is right up there. My motto is if it ain’t fun or interesting I don’t do it. The Blues show is interesting and a whole lot of fun for me.

You have a great radio voice do you work on it?

The older I get the deeper the voice seems to get. In Wichita, Kansas I was asked to do  a commercial for Arby’s. They were bringing a new product to the market. It was some sort of stuffed baked potato. There was a line that went something like: smothered in a sour cream sauce. After I did that commercial, car dealerships and a lot people came to me. They wanted me to sound like I did in the Arby’s commercial. The only way I could get into that voice was saying that line. In Jacksonville, Florida I would sometimes let my Texas accent slip out. Everybody wanted me to do a country style voice. I use my own voice. I try not to sound too country, but I want to keep the Texas unique accent. I just let the voice flow like it flows.

What’s next for Uncle Buc?

Career wise I am going with the flow. Next month I turn eighty-one. Most people think I am a lot younger. When you get to be my age, I take a great amount of pride with what I am doing. Living through this virus ordeal is one thing. I am upright and I am breathing right and those are two things you need to worry about these days. I don’t know why people keep asking me if I am behaving. That answer gets easier every year. I have five grand kids and I have one great granddaughter. I try to stay in touch with them and visit them as much as I can. That is what is in store for me. I am going to keep going for as long as I can and spread the Blues around the world.