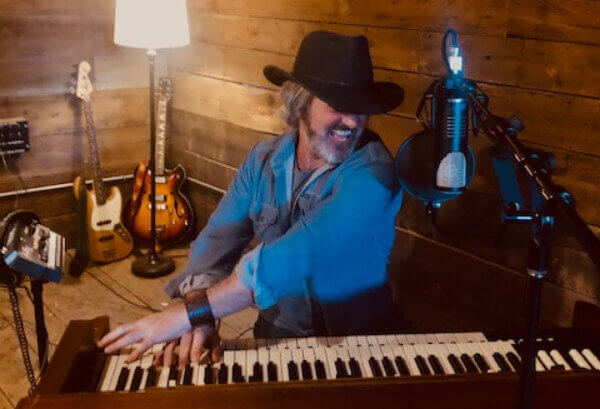 This is the second album release by the author of Crossroads and his band. Their eponymous debut was released in February of last year. This time it’s a double CD release containing 20 songs.

“I’m a storyteller,” Fusco begins as we chat about the new project. “I started early in songwriting. Music began very early in my life, and songwriting has been very meaningful to me.”

This from a man who has come full circle from songwriting to over a dozen screenplays to novels, and back. “All but two of the twenty songs on John the Revelator are new originals,” he shared. “Eighteen new originals that I wrote, and then the title track being traditional Gospel and ‘Don’t Mess Up a Good Thing’ is a Fontella Bass song that I do a duet with Risse Norman on.

“That first album that I did with Cody Dickinson was really kind of a spontaneous, lightning in a jar thing that happened, well again, because of Crossroads. Cody’s father, Jim Dickinson was my blues lore and blues history advisor on Crossroads, courtesy of Ry Cooder. I was 24 years old and had just come off the road. The road was my high school. My head was spinning when we landed Ry Cooder to do the music. Ry came to me and asked, ‘So who’s your harmonica influence?’ I said Sonny Terry and before I knew it Sonny Terry was hired on. Anyway, Ry came to me and said, ‘Listen, while you’re doing the shooting script and re-writes, I’ve got this great guy from Mississippi who’s just a font of blues knowledge and lore.’ He connected me with Jim and it was just magic.

“At that time he had two little boys, Luther and Cody, who he was trying to guide into Americana and roots music. They were headed more in the direction of punk, so Jim took them to see a rough cut of Crossroads, and that changed their direction. ‘Wow dad, you’re right. The blues can be cool’.

“That experience of seeing and recording with Cody years later, plus my road trip across the Delta to see him, flipped the switch and made me realize this is something I’ve been away from for too long.”

“On this release we brought Sarah Morrow and her trombone could barely fit in the space,” Fusco says about recording in the tiny attic studio known as the Checkerboard Lounge. “She was sitting on the floor of the vocal booth with her trombone, Risse was sitting on the couch. It was very intimate and tribal. I love it there. When Cody and I get in there we go from morning right on through the night. It’s like a creative sweat lodge. Much like his dad, Cody has this Sam Phillips way of bringing the truth out in a performer.

“I have a farm up in the mountains of Northern Vermont. So the X-Road Riders – I have the Southern Chapter which is Cody and Risse and Sarah, but I also have some players up here. Coming back up here, I went into several larger studios with a producer from New York City named George Walker Petit, who is also a renowned jazz guitarist. He was basically engineering some of the new originals at Meadowlark Studios, and then also at The Tank, which is the home studio of the band Phish. George and Cody decided to make it a co-production, and they were both able to draw things out of my songs, giving the album some real diversity and texture.”

Basically John the Revelator is a musical roller coaster. On one hand there is the sweaty, muscular, electric blues from Mississippi, and on the other the polished, jazzy, grand piano ballads recorded in Vermont.

“There was a point in time when I said, ‘Do I split this thing’?,” Fusco says. “But Cody convinced me that there is a unifying theme.” Fusco had written all this music during a particular period of time creating a musical novel. Dickinson told him, “All those chapters should be in the book.”

Indeed there are various chapters, each telling a bit of the story. Written predominantly while Fusco is traveling, “Snake Oil Man,” is an example of modern day political satire, characterizing our current leader as a modern day medicine show huckster. He describes “Motel Laws of Arizona,” as just an idea he had seeing a sign that read exactly that phrase on the door of a $12 per night motel room in the Southwest while filming his Young Guns movies. “Seeing that sign I thought to myself, I’m either going to write a Sam Sheppard style play or I’m gonna write a song. Thirty years later, I had been working on a song about betrayal, and boom, there it was. You definitely pick up these things while you travel.”

The newest member of the X-Road Riders is Sarah “Bone Doctor” Morrow. A jazz trombonist who made her bones playing in Ray Charles’ orchestra and working with artists including Bootsy Collins, Clyde Stubblefield, and Pee Wee Ellis before becoming bandleader, arranger and producer for Dr. John.

“Several years ago,” Fusco, always the storyteller begins. “I was getting on a plane in Burlington, Vermont to fly to New York City for a book signing for a novel I did called Dog Beach. They had me in first class, so I sat down and this interesting cat was sitting next to me. This guy had rings on all his fingers, holding a cane with a raven feather and carvings all over it. I thought, this is a voodoo vibe. I got the right seat, this is gonna be cool. As people were getting on the plane, they kept stopping at our seat and saying ‘great show sir,’ and the like. So I looked up and son-of-a-bitch, it was Dr. John. So I’m sitting next to Dr. John, we take off and I introduced myself. His bandleader was this very animated, funky, fun, and in control of the whole scene woman who introduced herself to me. After the New York trip, I checked her out and oh man, this was the lady that was overseeing and taking care of everything and she’s an amazing trombonist! She had given me her card, so I contacted her via email, and we stayed in touch. She heard the first album I did with Cody and she reached out to me. She was really enthusiastic about it. I think Mac had just passed away the same week as her mother, and she told me that the music really touched her. She said, ‘If you ever want my ‘bone, let me know.’ So when I had this new stuff written, I reached out to her and she drove in from Bowling Green, Kentucky. She even held a clinic with my up North horn guys and is definitely part of the band now.”

I was interested if John had any favorites among the songs on the new album. Most folks reply to that question with, “That’s like trying to pick your favorite kid.” Fusco however, answered quite honestly. “I kind of do things on my own. I don’t really track who’s doing what right now. I think ‘Bone Deep‘ is special to me. It was one of the loosey goosey ones at the Checkerboard Lounge. ‘Ophelia’ is just me on the grand piano and organ which is about caring about someone that you kind of lose control of due to their addictions. That’s something I think we all can relate to. ‘Bad Dog,’ is a minor blues that we recorded at The Tank. They had a 1955 B-3 in there and I had brought in just the stripped down Northern Chapter. It’s kind of an epic minor blues which is, I believe, eleven minutes long. It’s one of my favorites because I based it on a Samurai proverb, ‘Nobody loves a warrior until it’s time to go to war.’ I twisted that into ‘Nobody likes a bad dog until there’s trouble at the door’.” (I have to admit, “Bad Dog” is also one of my favorites – I can relate).

These days I find myself thinking about how my career as a storyteller (across several mediums) has benefited from the music mentors — the ‘old blues guys’ — who inspired me back in the day when I was young and traveling in the American South. As a dropout and runaway, that was my high school. My thesis was a movie I wrote called ‘Crossroads,’ and now 16 movies and all these years later I find myself coming full-circle back to my music roots and telling stories through song again.

With that said, I am pleased to announce that my new double album ‘John the Revelator’ will see all proceeds going directly to the W.C. HANDY ARTS RELIEF FUND (HART Fund) established by the The Blues Foundation. This fund helps blues musicians and their families in financial need due to a broad range of health concerns, dental care, as well as funeral and burial expenses.

John the Revelator, with its cover art by Bobby Whitlock, hit the streets today. 20 songs from a bluesman who lived the life in the Delta before ever bringing it to the big screen. 18 brand new originals from John Fusco, a storyteller who has successfully sailed the waters of novelist, screenwriter, author and more, finally finding his way back to his first love. Two CDs with all proceeds benefiting a blues charity. There’s a song in there somewhere. In this case, a whole satchel full of them.

John Fusco and the X-Road Riders