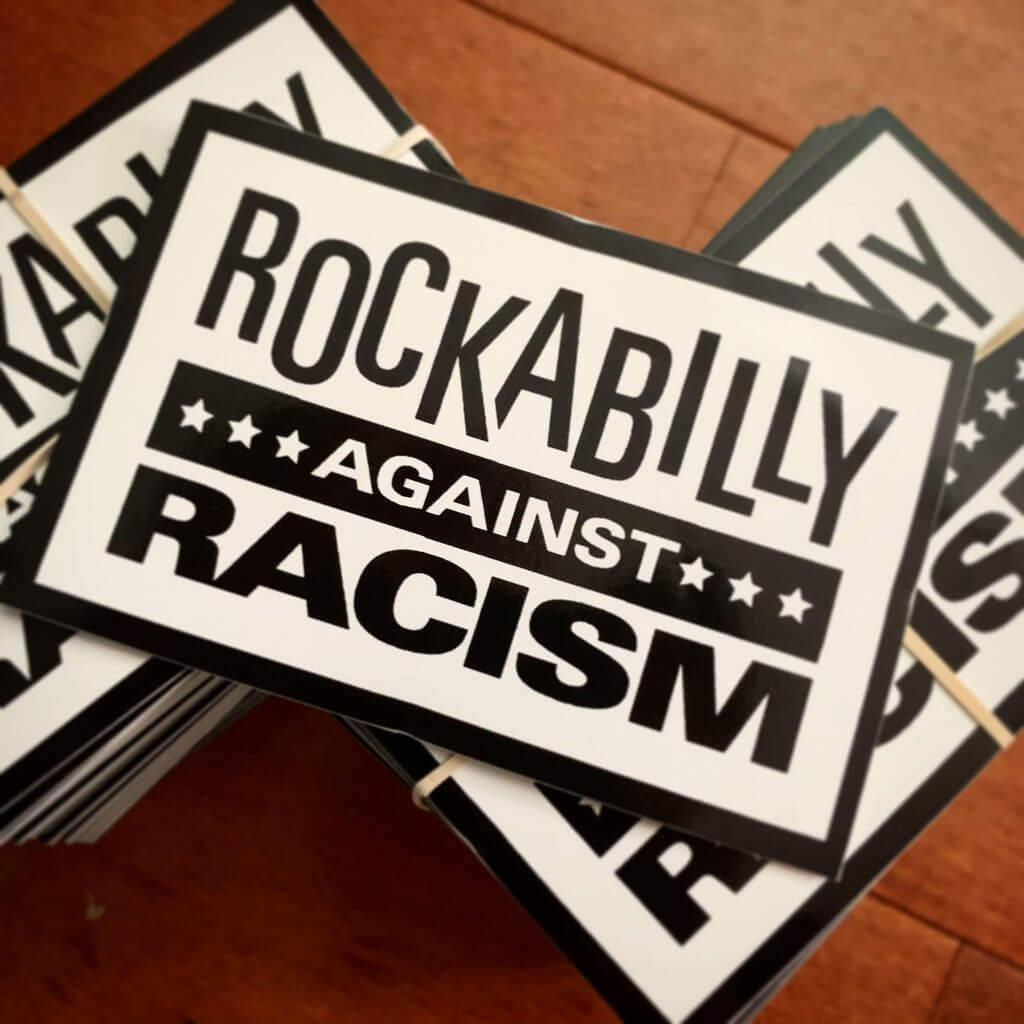 I first started making Rockabilly Against Racism stickers in August of 2019, shortly after hearing the news of the El Paso shooting. At the time, I just couldn’t wrap my head around it – what amount of hatred inspires someone to drive an hour away and open fire on a random assortment of unarmed strangers because of their race? It was the cold premeditatedness of the action that broke my heart.

Over the previous few years, I had watched President Trump and others continue to stoke the fires of racial hatred in America. It was divide and conquer and, like many, I felt helpless. But being an artist, I understood that you must combat negative propaganda with positive propaganda.

The idea was inspired by Joe Strummer / The Clash and, more specifically, the legendary Rock Against Racism gigs that they were a part of in the 1970s. For me, the beauty of early rock-n-roll lies in the synergy and cross-pollination of different musical styles and cultures – the twang of country music mixed with that rhythm and blues boogie, combined with the passionate fire of gospel music and the soulful harmonies of doo-wop. It’s Little Richard and Jerry Lee Lewis. Buddy Holly and Chuck Berry. Bo Diddley and Ritchie Valens. This music helped break down the walls of segregation in the south and paved the way for the 1960s.

Our band is based in Philadelphia, where punks once referred to the rockabilly scene as the “skinhead retirement community.” It’s 2020 and, unfortunately, that scene is still littered with images of the Confederate flag. Now I’ve heard people claim the use of that flag is about southern pride and rebellion, not racism.  I don’t buy it.

A real rebel doesn’t need a flag – they make their own. And that’s what the Rockabilly Against Racism sticker is for us – a new flag.  We needed to set ourselves apart and let everyone know that while we celebrate the sound and style of the 1950s,  we’re not living in the past. We’re taking that classic 1957 Chevy and putting a hybrid electric engine in it. Vintage sounds, not vintage values.

So I handed the stickers out at our shows and put the message out on social media that I’d mail a few to anyone who sent their address. Since then, I’ve distributed a few thousand all across the states as well as Europe, Australia, South America and Asia.  And with every batch, I include a hand written Thank You note in an effort to personally acknowledge people and begin to build a real sense of community.

People asked for a Facebook group, so we got that going as a way for bands, promoters and fans to connect and work toward making positive change. I offered the sticker design free of charge  to anyone who wanted to use it – the only stipulation being that they couldn’t make a profit off of it. Everything must be given out for free or sold for cost.  A group in Germany started distributing shirts and patches all over Europe and a collective of vintage vendors began sending stickers out with every order.

People are printing stickers and buttons in Texas, Tennessee, Las Vegas and elsewhere.  We had tentative plans to organize several Rockabilly Against Racism concerts to raise money for different organizations, but COVID-19 quickly hit the pause button on that. It will happen at some point though.

I am under no illusions that this effort is a miracle cure to fix a major systemic problem. My hope though, moving forward, is that when some young kid discovers this music, and starts going to shows, that they’ll see the Rockabilly Against Racism sticker on the band’s bass guitar or some patches on the jackets of audience members and realize that they are welcome. It’s an inclusive scene that we’re building. This isn’t meant to solve the problem – it’s a spark to inspire people to make a difference.

Listen to “Come on Angels” from the band’s new album, released July 31.