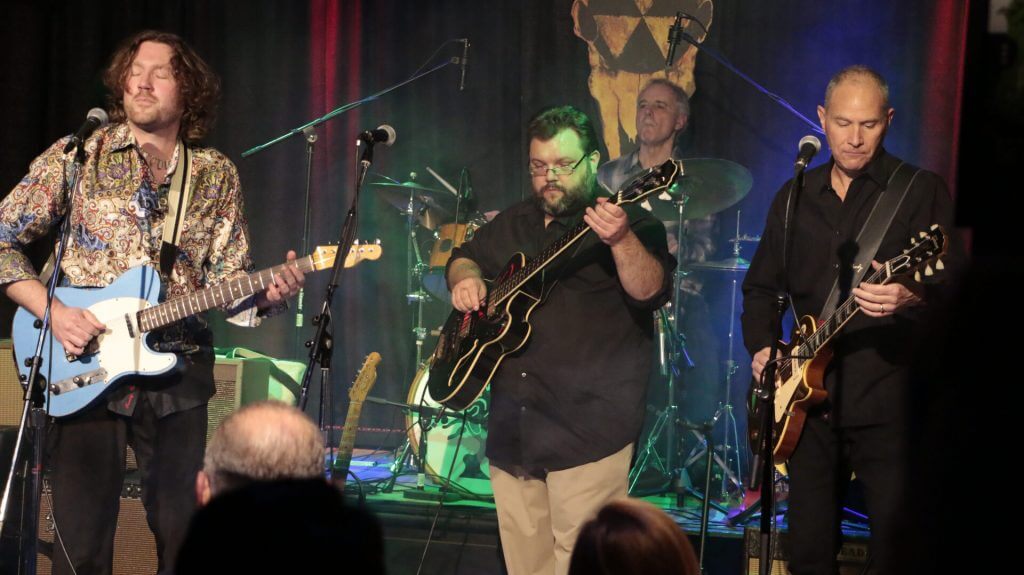 The Barrett Anderson Band is scheduled to release their new live album, HypnoBoogie on September 25th via Whitaker Blues Records. The very first track is their sparkling cover of Bo Diddley’s “Mona.” 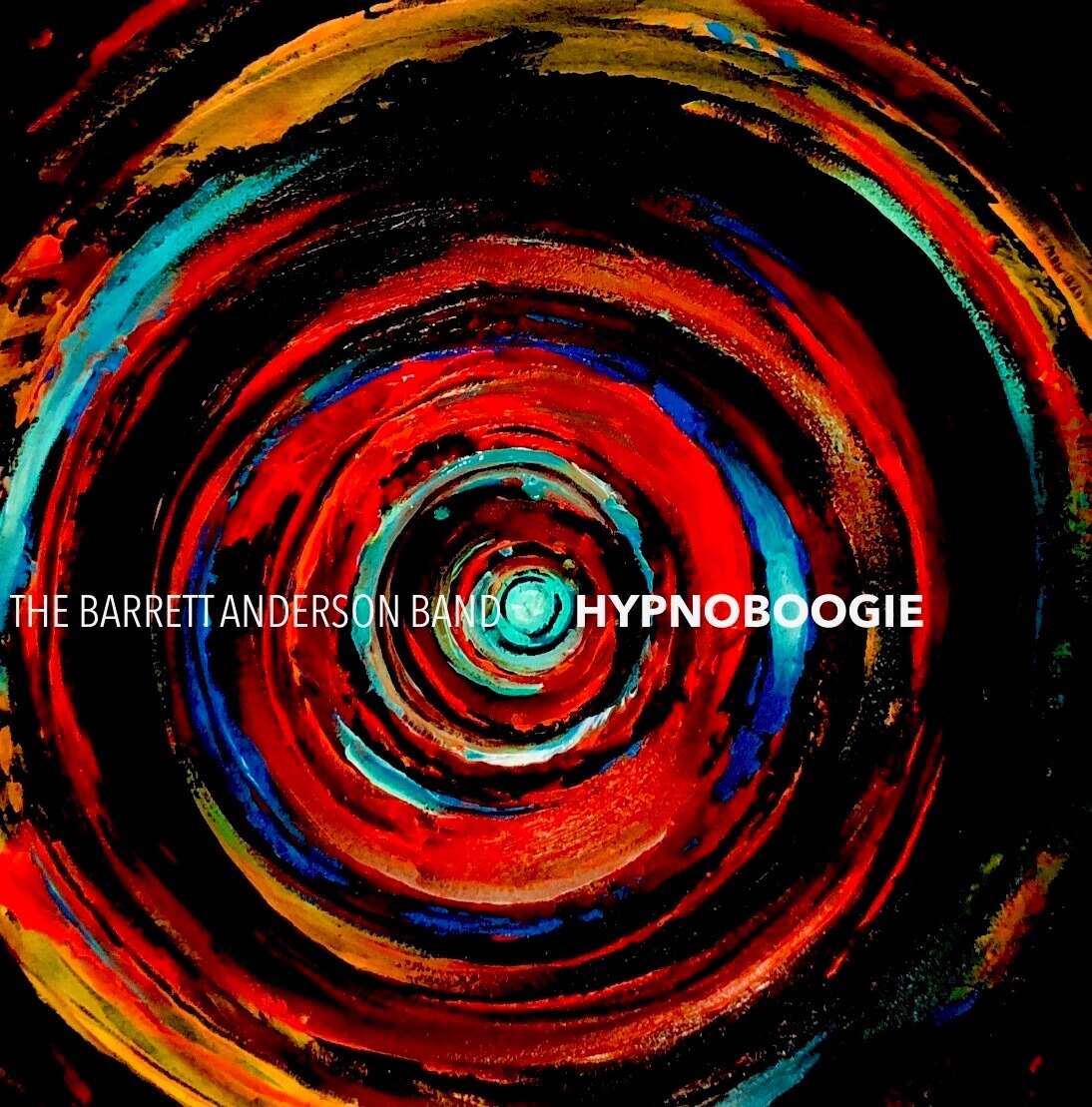 Captured during one show at The Fallout Shelter in Norwood, Massachusetts, on February 1st, HypnoBoogie packs all the energy and passion of the band’s legendary live shows their fans have come to expect.

Hailing from Boston, Mass., the band is made up of Barrett Anderson – vocals and guitar; Charlie Mallet – guitar and vocals; Doug MacLeod – drums; and Jamie “Black Cat Bone” Hatch – bass and vocals. Influenced by the likes of Muddy Waters, Howlin’ Wolf, Magic Sam, and Junior Wells, this Bean Town foursome packs enough raw energy on stage to power the whole of New England. Plus, there’s just something about the sound of a Les Paul mixing it up with a Telecaster. Or is that just me? For “Mona,” they also added special guest Emily Anderson.

Another of their influences, and the reason they choose “Mona” for their live shows is “The Originator,” Bo Diddley.

Mona has evolved through many roles and forms for The Barrett Anderson Band. I’ve always loved Bo Diddley – that rhythmic drive that you just can’t not groove to, and the sheer surrender to the beat. It’s all about the groove. Mine the groove. Don’t let up until the deed is done.

Bo Diddley (and also Chuck Berry) are two huge influences for me – as big as Muddy, Buddy, or Wolf. Bo and Chuck evolved the blues and carried the music forward, making the music new again and creating a genre at the same time. I really strive to carry the music forward with The Barrett Anderson Band. I don’t believe in treating this music like a sacred, delicate museum piece. It’s alive, baby! You’ve got to play it with life, with vigor, with everything you’ve got. Like Bo Diddley, you either serve the groove and feel its rhythm flowing in every last piece of your body, or you just can’t swing it and you might as well not even try.

I got to see Bo Diddley just once. I was 14 and had a big crush on a 16-year-old with a license, who shared a similar love of Blues music, although her preference veered towards the piano-based side of things. Bo was playing 45 minutes away, and she’d drive if I bought the tickets. While we were en-route to Bo’s show she played ‘Live at Fillmore East’ by The Allman Brothers – she had it on cassette tape and we cranked it! It was my first time hearing that iconic album. I can still picture exactly where we were when I heard those first searing notes of “Statesboro Blues.” It was a revelation! Realizing that The Allmans were more than “Ramblin’ Man” felt akin to realizing J. Geils was more than “Centerfold.” Life changing moments.

I don’t remember every detail of that Bo Diddley show. At one point the sound man crept on the stage and whispered something to the bass player of the local pick-up band accompanying Bo. The bass player then went to the mic and said “The soundman just asked me to ask Bo Diddley to turn down, but I’m not that stupid!” to which Bo muttered “Damn right,” as he rolled his hand across the knobs of his Roland Jazz Chorus amp, turning all the knobs all the way up. His amp was not touched for the rest of the night, and the sound man kept his mouth shut. I remember he played “Who Do You Love,” “Roadrunner,” “I’m a Man,” and “Mona.” I also remember Bo hitting on my date all night long from the front of the stage and continuing to do so after the performance when we went to get handshakes and autographs. “Look at him… He’s ready to cut me with a razor,” Bo remarked about me. He was wrong, of course; I was instead thrilled that Bo Diddley agreed with my taste in women.

We originally introduced the Bo Diddley Beat into our sets as “Hey Bo Diddley,” and we played it as a set closer. It was strong, driving, and dynamic. The band could really lay into the groove. I think we gave the groove the proper amount of respect. Since I couldn’t conceptualize any way to follow up that energy wouldn’t be a let-down, it was a set-ender. The more we played “Hey Bo Diddley,” the more I liked playing it, except the words started bothering me more and more. I really didn’t want to be singing about “Bo Diddley having a farm full of women,” so I started looking for other sets of lyrics. On the way to a gig I remembered “Mona,” both Bo Diddley’s version but also a version by Quicksilver Messenger Service, a favorite psychedelic band of my Dad’s. I later realized that “Mona” also made an appearance on The Rolling Stones debut album. The lyrics seemed just right to me. They’re about a woman, and love, and longing, and how that makes you feel, and what you’ll do to be with her… all things easier for me to relate to than “women here, women there, women everywhere…” While driving to that gig I listened to “Mona” on repeat, memorized the lyrics and sang “Hey Mona,” instead of “Hey Bo Diddley,” that night. We haven’t looked back.

A year or two back, egged on by a challenge/dare from Jamie Hatch (bass player), I wrote out our regular set list and then reversed it, so the last song was first and the first song was last, and that was the set list at our next gig. As we had been playing “Mona” as the closer of the first set, it became our night’s opener, and it worked. It really worked. It did take some effort to keep that momentum – that drive and energy – going… It IS a hard song to follow, but we’re up for the challenge, and starting our shows with such a powerful opener helps us to “get on top of the wave” and, while we have to balance and surf for the rest of the set, our momentum and pace is already in hand.