Bryan Porter Hinkley is ‘Living For a Change’ 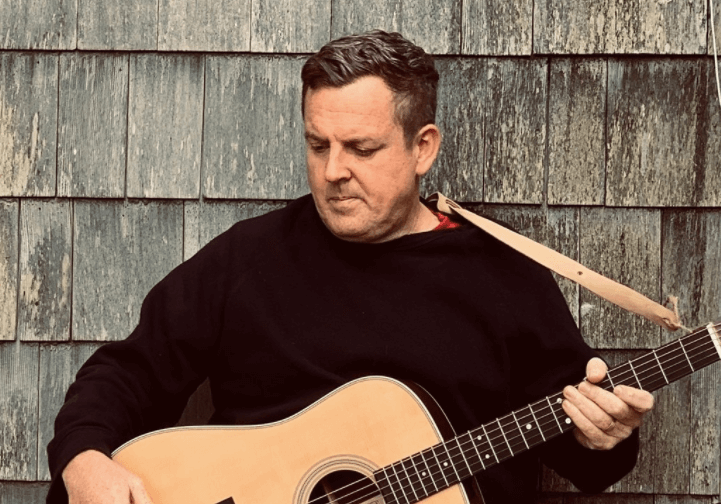 Today, guitarist, songwriter, singer, producer Bryan Porter Hinkley drops his debut solo EP, We Live Through It. Hinkley is best known for co-founding and playing guitar in the punk rock bands Tree and Never Got Caught, as well as founding the music house, Gratitude Sound. His composition work has been featured in multiple TV commercials, films, and network television shows. In addition, he has also contributed to records by The Dropkick Murphys, Yothu Yindi, Gozu, Sam Black Church, Clutch, Curb Feeler, and The Voodoo Dolls.

Not mere footnotes on his musical resume are the touring guitarist positions he held for rock bands Clutch and Gang Green. We Live Through It finds Jean-Paul Gaster (Clutch) again alongside Hinkley.

The three-song EP was primarily written and recorded in a makeshift home studio during the spring and summer of 2020. Recorded in Hinkley’s home during quarantine (with Gaster’s parts recorded in Maryland), it was mixed by Benny Grotto at Mad Oak and mastered by Jeff Lipton and Maria Rice at Peerless in his hometown of Boston.

“I started writing these songs just before Covid was ramping up in the US. I was writing some at my studio in Boston and some at home. Once the city essentially shut down, I started writing/recording in my daughters bedroom. So, most of the guitars and vocals were recorded at home,” Hinkley tells me of the process.

All three of the tracks are bonded together with the big sound and driving beat of Clutch’s Jean-Paul Glaster. “I sent JP the music and he sent me back versions with drum tracks separated. Then I re-recorded my parts on top of his drums and sent it back. We went back and forth like that until it was sounding good enough to mix. By that time, restrictions were a bit more relaxed and I think I was one of the first clients allowed back into Mad Oak. We took the precautions but honestly, I think it was still a little awkward for everyone. We did some rough mixes to get the basic sounds together and Benny touched everything up at his home. I’ve never done a solo project before, but I imagine I’d be doing most of the recording alone either way.”

On his debut, Hinkley grapples with change and human turmoil, and in turn enlivens the subjects in a snappy, sanguine tone and through inspirational lyrics. “Creating a solo EP is something I’ve thought about for a long time but never was willing to put in the time and effort to make it happen. The craziness of the current affairs and how suddenly the world turned upside down caused me to commit to making this EP. I have a pretty philosophical point of view and I tried to incorporate that into these songs,” Hinkley opens up. “I’ve heard people refer to records as a snapshot in the timeline of a band. I’ll certainly remember the creative process for these songs, and ultimately that’s the part I enjoy the most.”

The EP’s opener, “Redbull and Gasoline (Living For a Change),” examines life’s most abiding characteristic: the inevitable and constant state of flux. “There’s a part I like in the first verse of ‘Redbull and Gasoline’ where you can hear my dog, Luna, barking in the background. I’m glad we kept that in there because it reminds me of the moment.” The balance of life can feel more delicate in these unsettling times, but the moment is something Hinkley decides to live in rather than dwell on.

Immersed in the sounds of bluegrass instruments from a young age, Hinkley cut his teeth listening to his mother and her band rehearse. “She played fiddle, guitar, penny whistle, and sang. My dad played piano and sometimes upright bass. Her group Patchwork released an LP in the late 70s called Hard Times in the Suburbs. She still plays with a few different groups down in Gainesville, FL. I remember being amazed that my mom had a record.”

He recalls from subconscious depths the influence bluegrass had on him then and what it means to him now. “My mom would take me to weekly concerts called the Folk Guild and they would have jam parties at the house. I think the rhythmic element to bluegrass always drew me in. Bluegrass players like Doc Watson and the percussive sound of a banjo always stood out to me. I never really played it, though. Probably because it was my parents’ music. I had to come full circle.”

When writing “Hand in the Fire,” Hinkley circled back to his folk roots by using just his voice and a guitar. When he added bass, drums, and percussion, it took on a more danceable quality. The closing track, “No Time,” scrutinizes the social construction of clock time: “Time’s catching up, not slowing down.” Gaster’s new wave-esque drumbeat complements Hinkley’s telephone vocals while vigorous drum fills accentuate the chorus’ assertion of, “there’s no time better than right now!”

“For this project he basically did his drums at his studio in Maryland and I did my parts in Boston. There were some texts and a few conversations but I had him do what he wanted for the most part. A few years ago I did some recording for another project at his studio and I also recorded one record with Clutch in LA. One of the things I respect about the guys in Clutch is they don’t tell each other what to play or what not to play. It’s different from my experience in other bands where everyone tries to help by telling each other what they should or shouldn’t be playing. I don’t know that one way is better or worse but it’s a more peaceful process when you can play whatever you want. I respect JP’s taste in music and thankfully, I trusted him completely with these songs. I’m very happy with his contributions.”

An acoustic EP is a rather far cry from Clutch or Gang Green, but those elements of hard rock and punk naturally occur in Hinkley’s newest effort — making for a unique and fresh sound.

“I wanted to make a record that is listenable to people both in and outside of the hardcore/punk world. There is some fear of disappointing an existing audience, but I feel it’s important to be true to myself. I’ve always enjoyed a variety of music and I think most people will keep an open mind and hear it for what it is. I wanted to write songs that sounded good whether they are played on one instrument or with a full band. I had been invited to do a solo performance opening for my friends Jesse Ahern and Lenny Lashley and it forced me to pick up an acoustic and practice. I found it to be enjoyable, so I thought I’d keep at it for a while. Plus there’s less stuff to carry around.”

As for influences on We Live Through It, “they don’t always appear to be recognizable, but maybe these songs are influenced by CCR, Joe Walsh, Gerry Cinnamon, some old calypso music, Dolly Parton, The Highwaymen, and maybe some Bonnie ‘Prince’ Billy. I also did watch the first couple episodes of the Ken Burns Country Music documentary and was really inspired by Jimmie Rodgers. I never knew his story.”

He continues, “I think touring was a good way to find new music. There’s a lot of down time to check out new stuff. We used to play a lot at a club in Tulsa Oklahoma called Cain’s Ballroom. (Home of Bob Wills and the Texas Playboys.) So, I bought some Bob Wills music and I liked it. I went to the Ernest Tubbs record store in Nashville and got some of his stuff and liked it. There’s a great record store in New Orleans called the Louisiana Music Factory where I’d buy some random blues and funk. I always picked up whatever looked good to me at the time but I don’t know what sticks and what doesn’t. I did make an inspiration playlist.”

Hinkley looks forward to performing in front of a real audience again. But for now, he has a few streaming shows slated for October 24th and November 13th. You can visit Bryan Porter Hinkley for further details.

Order We Live Through It