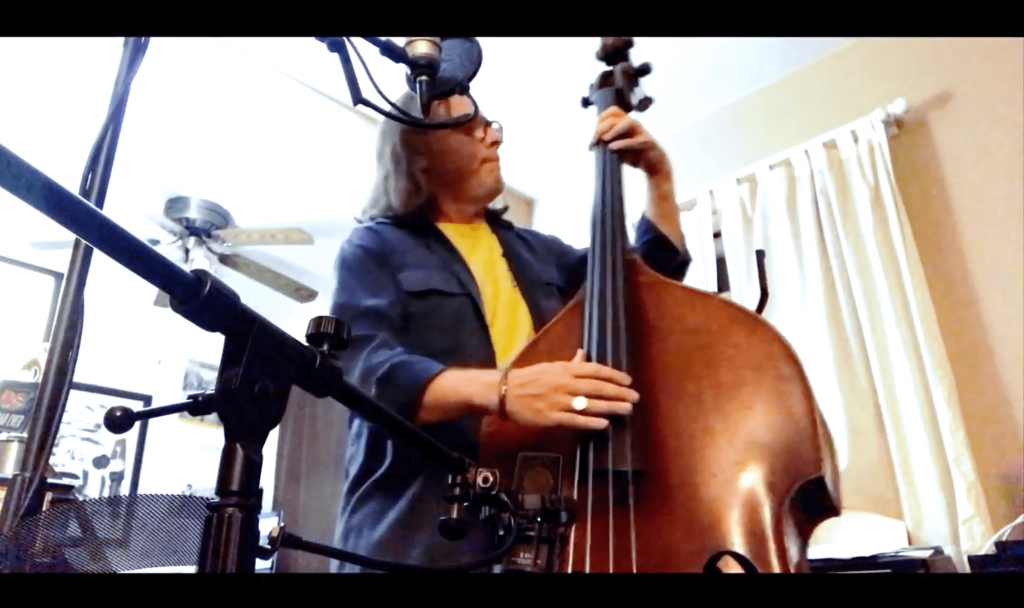 Tom Freund, the singer-songwriter and multi-instrumentalist best known for his upright-bass-as-lead-instrument work, has kept active during the pandemic months of 2020. Today, he unveils a new video adaptation of an old blues song, “Corrina Corrina,” re-titled “Corona Corona.”

Freund, a proud Venice, California resident, has eight studio albums (and two EPs, two records, and a kids’ record) to his credit, including the 1992 duo release with college friend Ben Harper titled Pleasure and Pain. The New York Times said of his 1999 release Sympatico North American Long Weekend : “Every year the mounting landfill of new releases that threatens to bury the working music journalists yields a few unexpected gems, and Tom Freund is one of them.”

NPR, featuring his 2014 album Two Moons, noted: “California-based troubadour Tom Freund sings of skate-boarding kids, impending doom and Happy Days lunch boxes on his new album.” The Washington Post wrote of him: “Freund clearly delights in enigma. His vocals could go from laconic to impassioned without such obvious trickery as cranking up the volume. His lyrics are full of curve balls.” Of his most recent release, the Los Angeles Times said, “Fans of roots-oriented artists such as Tom Petty, Townes Van Zandt and Lucinda Williams will find much to explore on East of Lincoln.”

But this is about Freund’s new song and accompanying video:

OK Corona, it’s really time to go! I took a traditional blues song recorded by Blind Lemon Jefferson, Joni Mitchell, and Taj Mahal and I am letting the virus know that it’s not welcome here anymore! So I grabbed my trusty upright bass. Drums came from Piero Perelli in Italy. And my Venice friends joined me: Stan ‘The Baron’ Behrens on harmonica on my front porch, with Steve McCormick from his home studio on guitar. Good riddance … Corona, Corona.

It all started with ‘Drums From Italy,’ a friend and fellow musician Rob Calder (Passenger, Angus and Julia Stone) made a group of us on Facebook to share tracks during the lockdown, Send each other songs and play on them, a real Musicians Union of sorts, back in April. I had been messing around with ‘Corona, Corona’ in my head and on my bass for a while. So I went into our pooled Dropbox files and found this drum track from Perelli (and at the time Italy was in the hot seat of the virus). And I said this will be just fine for ‘Corona, Corona.’ So after laying down my upright bass and vocal live-to-drum track I asked my friend Behrens, a Venice, Calif. staple and legend (War, Canned Heat, Willie Dixon) to come and play harmonica on my porch of my apartment, and I brought a microphone out to him and he did a couple takes that were fabulous. Next was my other Venice comrade McCormick, who has his own studio, to lay down the sweet slide guitar. And send it back to me. Then I snuck a little organ on there for good measure. And mixed it from my place.

Probably the biggest influence on me was Taj Mahal and his wondrous versions of songs like ‘Corina’ and ‘Cakewalk Into Town’ — I have since recorded the latter with Ben Harper. I also loved a version that Joni Mitchell did and Bob Dylan and of course going way back to Blind Lemon Jefferson. Man, that’s the stuff!

So I put my own spin on the form, the lyrics to match the time, and music (especially by making it upright bass-focused — one of my favorite partners in life). – Tom Freund