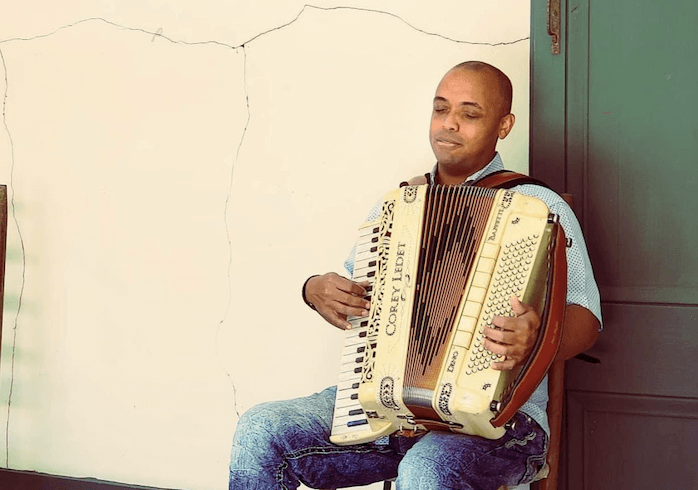 The self-titled album Corey Ledet Zydeco is this Zydeco star’s 14th album since releasing his full-length debut in 2004, 3 Years 2 Late. His 2012 release, Nothin’ But The Best, was nominated for a Grammy in 2013. Corey Ledet Zydeco is being released by Arnaudville, Louisiana’s Nouveau Electric Records January 15, 2021 via CD, digital download and on streaming platforms.

Corey Ledet Zydeco was produced by Ledet and Louis Michot, recorded at Dockside Studios, Maurice, Louisiana, June 2019 with Justin Tocket engineering and mixing. It was mastered by Mark Bingham at Nina Hwy Studio, nearby in Henderson. Corey is featured on lead, harmony and background vocals, accordion, drums and washboard. He was joined in the studio by Cecil Green on Hammond B3 organ, bassist Lee Allen Zeno, harmonica player Grant Dermody, Julian Primeaux on rhythm and lead guitar and backing vocals, and Gerard Delafose on drums and washboard.

Zydeco pays homage to Ledet’s family and musical heritage which are inextricably combined. His great-grandfather, Gabriel Ledet, played professionally with the colorful early Jazz legend Bunk Johnson as an upright bassist. Grandfather, Buchanan played drums with Clifton Chenier and Rockin’ Dopsie, as Zydeco’s first drummer and invented the twice-pumped bass drumming pattern called “double clutching” that’s been an integral part of the genre ever since. Numerous members of this extended French speaking Creole family followed in their footsteps, playing professionally and non-professionally in the decades that followed. Corey’s rise to Zydeco royalty in the 21st century was a fait accompli.

Working towards promoting the cultural heritage of his family’s hometown of Parks, Louisiana, he studied and incorporated Kouri-Vini, a regional dialect spoken by family members into songs on this album.

Ledet always studied a broad range of different musical genres owing to the love for all music deep in his soul. When he started to research his family’s genealogical roots, he found out that their musical roots dated back to late 1800s. They performed in a variety of the outfits that played Ragtime, early Jazz, Be-Bop, Zydeco, Creole and Blues. Learning this brought Corey a deep connection with his ancestors; and he realized that his interest in such a wide variety of music had hallowed precedent.

Corey Ledet was born and raised in Houston, Texas, and spent his Summers with relatives in small-town Parks, where he was exposed to their Kouri-Veni language and Creole traditions. This molded and shaped Corey’s world in a profound way. This culture has its roots in Louisiana, but eventually spread across the country, including into neighboring Texas. When he returned home after summer, Corey was able to remain immersed in the Creole culture he learned to love.

He learned everything he could about Creole culture – the traditions, the food, and most importantly, the music — so that he could incorporate it into all aspects of his life.

His love for Creole/Zydeco music was instant and hard to ignore. Ledet studied the originators of the music like Clifton Chenier, John Delafose, and Boozoo Chavis. His studies branched out to include any (and all) Zydeco artists. At the age of 10, Corey started picking up shows as drummer for Houston’s Wilbert Thibodeaux and the Zydeco Rascals and slowly learned his way around the main instrument of the style – accordion. He came to truly love every type of accordion: the single-note, triple-note and piano key … as well as still more exotic species! He worked at building his skills and coming to know knew each one intimately.

By the time he graduated from high school, Ledet was certain that music would be the focus of his future. Eventually, he moved to Louisiana to be fully immersed in his beloved Creole culture.

To this day, Corey Ledet remains true to his family and cultural roots and looks for ways to incorporate them in his musical work and style of living. He’s created his own unique style out of the diverse influences of the many musicians he’s studied, blending old and new styles of Zydeco, and more!