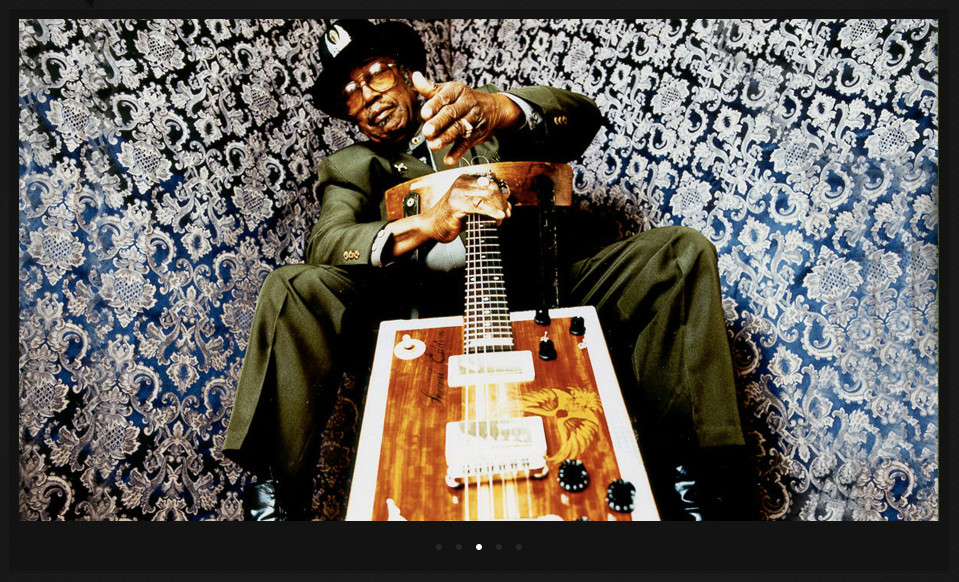 Bo Diddley made a massive rock n’ roll impact on The Ed Sullivan Show 65 years ago — and was promptly banned for life. What got him booted? The hard-driving track “Bo Diddley”, which spent 18 weeks on the top of the charts, two weeks at #1, and forever and irreversibly introduced the world to the hip shakin’ Bo Diddley Beat. Find that legendary Ed Sullivan performance at the bottom of this article.

For the special occasion in Rock History, we found the most interesting and unique facts about Bo, brought to you by Bo Diddley’s official merchandise at Bluescentric.com, the shop for Blues, Soul and Rock n Roll.

1. Bo Diddley was born Otha Ellas Bates in McComb, Mississippi on December 30th, 1928. His last name was changed to McDaniel when his mother’s cousin adopted him at age 8.

2. As a boy in Chicago, Bo Diddley took classical violin lessons from Professor O.W. Frederick of the Ebenezer Baptist Church, famous for being the church where Gospel choirs were first organized.

4. He, himself, said his stage name came from another performer whom his adopted mother knew in Chicago. The slang phrase, “bo diddley” translates to “absolutely nothing”. It has also been said that he got the name from friends as a teenager and boxer, or that Leonard Chess gave him the name which was also the name of a comedian in Chicago. Some claim he took the name from the one stringed instrument, the Diddley Bow.

7. In the early to mid-1940s Bo Diddley played the Maxwell Street Market in a band with Earl Hooker, who was 13 years old at the time.

9. In 1989 and 1990, Nike had a huge hit with one of their most famous ad campaigns, “Bo Knows”, where sports legend Bo Jackson played different sports while Bo Diddley riffed with his guitar. At the end, the musician utters “Bo, you don’t know Diddley!” The phrase immediately entered the American popular culture, and “You Don’t Know Diddley” became a hip thing to wear. Jackson and Diddley even appeared on Sesame Street, joking about “Bo Knows” with the Muppets. Even in 2015, singer Drake was seen wearing one of the vintage “You Don’t Know Diddley” tees.

10. The song “Bo Diddley” was originally titled “Uncle John” and was considered too dirty for the white American record buying public. Leonard Chess insisted it be re-written before he would record it.

11. In 1955, he appeared on the Ed Sullivan Show and was asked to perform the song, “Sixteen Tons”. He agreed, but when he took the stage, he read Sullivan’s cue card which had “Bo Diddley” written on the top, indicating his name. The bluesman reasonably assumed they had wanted him to perform his hit song, also named Bo Diddley. Sullivan was furious that Bo had not followed his explicit instructions and was never asked to return, but the damage had already been done — After that performance, Bo was an international sensation.

12. The Bo Diddley Beat, similar to the “hambone” became a musical standard in rock and roll, used in countless songs, including “Willie and the Hand Jive” (Johnny Otis), “I Want Candy” (The Strangeloves), “Magic Bus” (The Who), “She’s the One” (Bruce Springsteen), “Faith” (George Michael), “Mr. Brownstone” (Guns N’ Roses) and “How Soon is Now” (The Smiths)…

13. In the 1960s, Bo Diddley sold the rights to several of his songs in order to finance his children’s educations.

15. Bo played at the George Bush presidential inaugural in 1989 and Bill Clinton’s in 1993, making him one of the few artists to play both a Republican and Democrat Inaugural event.

16. Diddley wrote or co-wrote such standard hits as “I’m a Man“, “Mannish Boy“, “Before You Accuse Me” and “Who Do You Love“. He also wrote the Mickey & Sylvia hit “Love is Strange”, and the Dave “Baby” Cortez instrumental, “Rinky Dink”. He wrote under the name Ellas McDaniel but also under the names of his wives at various times such as Ethel Smith.

18. Diddley designed his distinctive, rectangular guitar himself, and was also one of the first performers to set up a home recording studio.

19. At his home studio in DC, Diddley recorded some vocals by a young Marvin Gaye, who, at the time, was Bo’s valet (a kind of assistant or errand runner). There is a possibility that Gaye is singing background on some of Diddley’s tracks from that time, as he recorded “Who Do You Love” and several other tracks in that studio.

21. In 2008, Bo Diddley was posthumously awarded a Doctor of Fine Arts degree from the University of Florida, shortly after his death on June 2nd of that year.