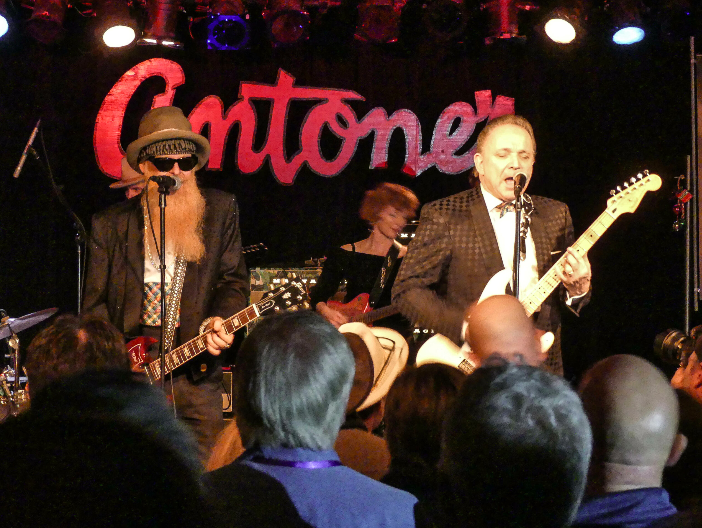 The five principals of The Jungle Show are at it again.  They are the grouping of like-minded legendary musicians who — quite simply stated — have gotten together after Christmas and in advance of New Year’s Eve for the past five years at Antone’s in Austin to play the blues as the blues should be played. Out of necessity, this year’s version of TJS takes the form of a live stream event with state-of-the-art production values.

The stellar performance by guitar greats Billy F Gibbons, Jimmie Vaughan and Sue Foley with drummer Chris Layton and Mike Flanigin transpired at Antone’s last week as a multi-camera HD shoot with multitrack audio mixed to record quality.  The show will be uplinked at four different times on New Year’s Eve to coincide with 8PM on both US coasts, in London and Sydney.  Those purchasing tickets can choose, irrespective of location, to view the event starting at any of those times and will have the right to view it again for forty-eight hours after starting the film.

Ticket information, times, etc. are available at JungleShow.tv where details about a VIP package and Jungle Show ticket and merchandise bundles are also available.  Ticket prices, good for any one device, start at $25.

The inception of The Jungle Show was the result of a casual conversation between ZZ Top’s Billy F Gibbons and Austin-based B3 boss Mike Flanigin. The two had been tapped to perform at the Austin City Limits Hall of Fame induction of B.B. King.  Their repertoire choice was “The Jungle,” a somewhat obscure B.B. King song that was somehow familiar to both who were joined at the event by Herman Jackson, B.B. King’s own drummer.  Thereafter, Gibbons and Flanigin decided to put together an ad hoc band to pursue the B.B. King-inspired blues course with Texas guitar slinger Jimmie Vaughan, Canadian blues rocker Sue Foley and Stevie Ray Vaughan & Double Trouble’s Chris Layton recruited for the effort going forward.

Billy Gibbons commented, “For five years consecutive years we’ve looked forward to putting The Jungle Show together between Christmas and New Year’s Eve.  It’s been a great way for all of us to cap the old year and bring in the new in rockin’ style.  Despite the reality of 2020, we were determined to keep our streak going so we’ve decided to go viral — the good kind of viral — and offer The Jungle Show to the world beyond Austin.”

Jimmie Vaughan noted, “We took inspiration for calling what we do ‘The Jungle Show’ from B.B. King’s song ‘The Jungle.’  There’s a lyric in there that truly relates to what’s going on these days: ‘I think I’ll move to the jungle people, move way out in the woods; yes, because the way things are here now, well, I ain’t doin’ myself no good.’”  He added, “I look forward to playing with Sue, Chris, Mike and Billy at the end of every year and this year is no different except for the fact that, in a sense, we’ve moved the show from ‘way out in the woods’ and directly into your house.”

“The Jungle Show is something I look forward to every holiday season,” Sue Foley stated. “It’s just so much fun to get down and play some blues with these legends.”

Mike Flanigin expressed his feelings as both a participant and a fan, “The Jungle Show is great fun for all involved.  But beyond that, it is a rarified meeting of two of Texas’ greatest guitar slingers, Billy Gibbons and Jimmie Vaughan.  To see them together, prowling the stage, is worth the price of admission alone.”

Chris “The Whipper” Layton, like Vaughan, also chose to quote a song lyric in his remarks, ““As Slim Harpo said: ‘I’m itchin’ and I know right where to scratch. So come and join us for the Jungle Show.”