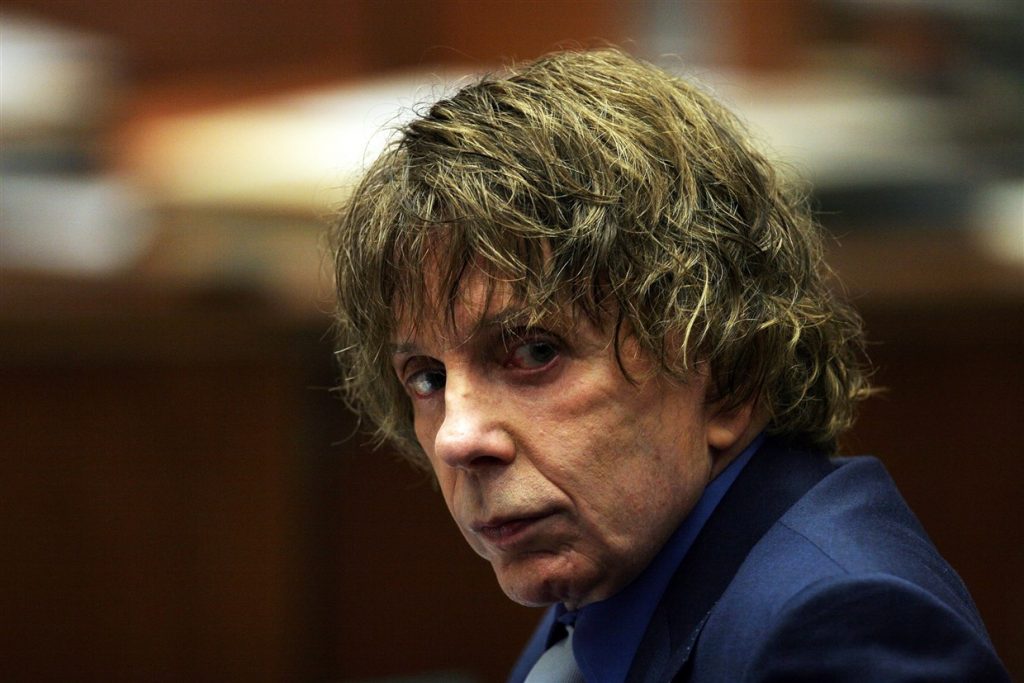 “Wall of Sound” record producer Phil Spector has died of Covid 19 complications at 81 while serving a 19 years-to-life sentence for murdering Hollywood actress Lana Clarkson. Known for his elaborate production techniques, he produced 20 top-40 hits between 1961 and ’65, mostly for his work with girl groups including The Ronettes and The Crystals.

Although he worked with The Beatles on “Let It Be,” his high-water mark for me was his production on Ike and Tina Turner’s “River Deep, Mountain High” which ironically only climbed to number 88 on the U.S.  pop charts.

When I interviewed his former wife Ronnie Spector in 2012, it was with the understanding that we not say anything about Phil. But Darlene Love gave me an earful in 2015.

As a background singer in the girl group era, Darlene made her name – or actually didn’t make her name – singing with The Blossoms and often working 12 hours a day in recording sessions with Phil. She became his favorite go-to female vocalist in the early ’60s. He chose her over his own wife Ronnie Spector on the perennial favorite “Christmas (Baby Please Come Home).”

“I don’t know what he did outside the studio, but he always thought and said I was the greatest singer he’d ever heard in his life,” said Darlene.

Talking to Darlene, I realized how deep was the damage Phil had done to her. “He’s A Rebel” hit number one on the pop charts in 1962. One of the most successful of  his “Wall of Sound” girl group singles, it was recorded in Los Angeles by The Blossoms, a backup vocal group but credited to The Crystals. It would take Darlene decades of work, including cleaning houses, before she would gain the recognition she should have had for singing lead on that song and “He’s Sure The Boy I Love,” a follow-up Crystals hit.

“My thing with him was he did not give me this voice, and he can’t do anything with it except what I give and let him use, and so I determined in my heart to follow the contract I had with him. Then, after the contract was over and he kept abusing his authority on me, I just decided to stop recording. I said, ‘Ok, if that’s what it is, if that’s the clout he has over me to hold me as a recording artist, I’ll stop recording. I’ll go back on the road and do background,’ and that’s why I had such a hard time doing jobs.

“I just refused to let Phil Spector do anything but talk and use his power any way he could to stop me, but I figured in my heart God’s power is bigger than his, so I’m gonna keep on doing what I know I should be doing, and I wouldn’t let him stop me, and I wouldn’t get distracted by all the little things that he did because all his little things were just to make me mad and keep me upset.

“I was trying to do everything he asked me to do. I was giving him another chance, and I was in a car driving when “He’s Sure The Boy I Love” came on the radio, and I stopped immediately and turned around and went back to Hollywood and went into his office, had a little argument/discussion with his secretary, and I told her, ‘I know one thing. You’d better get out of my way unless you want some of this what I’m ready to give him. Hey!’ Connie just moved out of the way, and she didn’t even say, ‘Darlene’s here.’ I just opened the door and went in.

“I had a seven-year contract with Phil Spector. That was the contract they had back in those days. (It said) he had the right to record me.”

“Yeah! Except for background singing. He had no control over that as a lead singer, and then I even got away with some lead singing that he didn’t know anything about. He knew it was me, but he couldn’t prove it.”