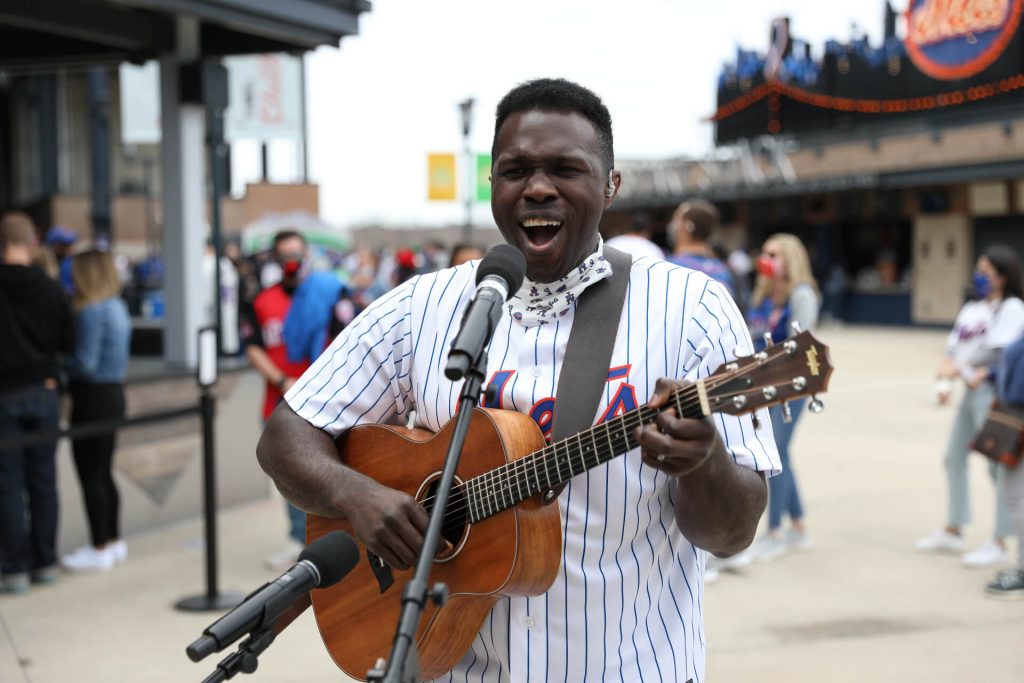 Joshua Henry has had a non-stop spring. The musician and three-time Tony-nominated performer released his debut EP Guarantee in early March via BMG, welcomed twin sons on March 21 with his wife Cathryn and performed the National Anthem before The Mets home game on Saturday, April 10 to a hometown NYC crowd at Citi Field. And that’s just to name a few things he’s been up to! Watch Henry’s performance of the National Anthem, and stay until the end when he is joined by his 3-year old son Samson:

Guarantee is out now and was produced by close collaborator Theron “Neff-U” Feemster (Michael Jackson, Dr. Dre, Justin Bieber, Doja Cat). The four-song set showcases Joshua’s immaculately powerful voice and his intelligent storytelling background, brilliantly pairing themes of vulnerability, love, and hope born out of the pandemic. The EP features lead single “Hold Me” explores the balance of the relentless pursuit of a dream while needing to ask for love and support, and was added to numerous playlists including Spotify’s “New Music Friday” (US, Canada, World) and Amazon’s “The New Black”; “Guarantee” which questions things we look at as certainties in life — a thought, a person, a gadget, a belief system, etc; and more.

Guarantee is Henry’s latest artistic endeavor, following his success as an actor including his three Tony-nominated turns on Broadway (Scottsboro Boys, Violet and Carousel), performing as Aaron Burr in the first touring company of Hamilton, and his upcoming performance in Lin Manuel Miranda’s highly anticipated directorial film debut Tick Tick… Boom! featuring Vanessa Hudgens, Andrew Garfield, Judith Light and others. Joshua’s passion for music was rooted in childhood though and, as he progressed through Broadway, TV and film roles, Henry’s heart beat out rhythms, his voice ringing with clarion emotion. But the entire time, he longed for an outlet to express his own story.

*Feature image by Jennifer Doak Courtesy of The Mets