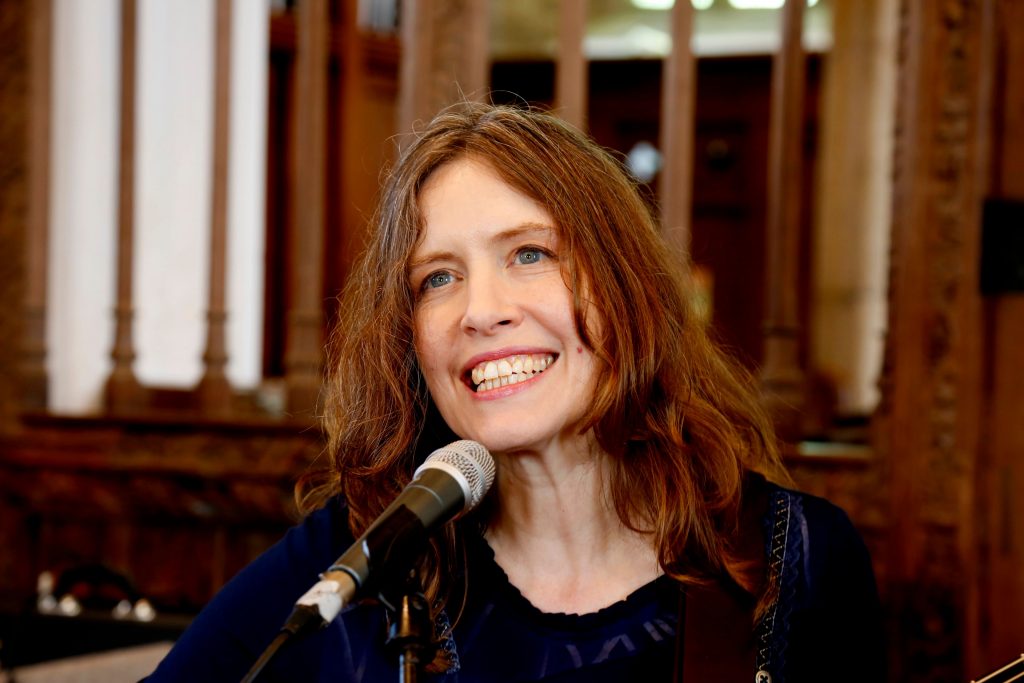 “Sweetness and Pain” is the fourth single of The St Buryan Sessions, the new album and video series by Cornwall-based Americana and folk roots singer-songwriter Sarah McQuaid. Filmed and recorded in the magnificent church of St Buryan, parts of which date back to the 11th century, the idea came about last spring when Sarah’s gigs and tours were cancelled due to COVID-19. 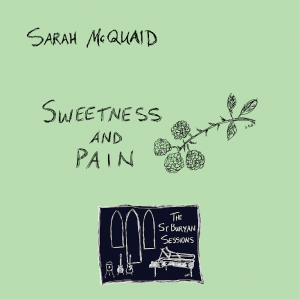 Rather than risk the technical pitfalls of live streaming, she used crowd funding to finance an album and video series that would capture the essence of a live performance despite the absence of an audience. This atmospheric a cappella number first appeared on Sarah’s 2015 album Walking Into White as three separate song snippets bookended by other tracks, but this time round she recorded the full song in its entirety.

Although Sweetness And Pain” is not a blues song in the traditional sense, it is well worth listening to as a master class in solo a cappella, a style favored by the early 20th century blues men and women, epitomized by Son House’s version of “John The Revelator.”

Similarly, the roots of the worldwide renowned a cappella choral group Ladysmith Black Mambazo reach back to the 19th century US vaudeville troupes that toured South Africa. Their music told stories of survival through struggle, black slave laborers forced to work in gold and diamond mines. The workers sang about their difficult lives in heart-rending a cappella, often reflecting individual melancholy and usually at night so as not to wake their guards.

Sarah McQuaid takes her 21st century a cappella into a church setting which is appropriate given its literal Italian translation as ‘in chapel style,’ probably because of its association with gospel and congregational music. From the outset, McQuaid’s voice has the depth and richness necessary for her lyrics to resonate inside the entire building and echo back from the rafters to create a spiritual vibe.

In the absence of musical instruments, McQuaid has to be pitch perfect, sing each note with precision and retain complete control of her vocal chords. She also has to maintain a rhythm which she achieves through subtle cadences, careful phraseology and varied intonation. This is not a style of singing which would suit the faint hearted, but Sarah sings her heart out with a perfect balance of technical skill and emotion.

She manages to stretch out and hold the notes of the ‘Sweetness’ and ‘Pain’ of the chorus brilliantly which contributes to the natural flow of the song and makes it compulsive listening. Overall, Sarah uses a cappella as a transcendental medium for telling her story of the cycle of life and conveying its meaning with dramatic effect, power and grace in what can only be described as a virtuosic performance.

I was performing the entire album ‘Walking Into White’ live, track by track, as the first half of every gig, with all those little snippets from “Sweetness and Pain” in place, so that they flowed out of and into the other songs the same way they did on the album. But after a year of doing it that way, it felt like it was time for a change, and at first I dropped that song from my concert set entirely. It was only relatively recently that it occurred to me to try actually singing it the way I originally wrote it, as a complete song, rather than little fragments, and when I started doing that I found that I liked the song presented that way, too, so this was my chance to finally record it as written.

Like so many of my songs, this one came out of an image and the metaphor it suggested. Our garden is full of brambles which bear wonderful juicy blackberries that I make into crumbles and jam, but picking them is a process fraught with peril and my hands can wind up looking pretty mangled afterwards. Like most of the songs on Walking Into White, this one was written in winter, so not blackberry season at all, but we had a rare (for Cornwall) fall of snow, and I was looking at the brambles all covered by snow and thinking about the blackberries and the thorns and how lovely and soft and smooth the brambles looked with the snow lying on them, and the changing of the seasons, and the metaphors suggested by all of that, and this is what I wrote:

So, yes, it’s all about the cycle of life and the price that’s always payable for moments of sweetness, and the ways in which nature can both wound us and reward us, all with complete indifference on nature’s part- it just does its thing without any intention or agency or concern- and yes, I suppose all that can resonate especially now that we’re all being deeply affected by natural phenomena ranging from viruses to climate change but also learning to appreciate the beauty of nature even more as we’re driven to spend more time out of doors for want of indoor entertainment … So lots to think about there!

“Sweetness and Pain,” released on April 2nd, is now available for streaming and download via Spotify, Apple Music / iTunes, Bandcamp and other services. The video of the song was premiered the following day in a live “watch party” event on YouTube, The roll-out of singles and videos will continue throughout the year, and Sarah hopes to release the full 15-track, 72-minute album, The St Buryan Sessions, on CD and double LP in October (Shovel And A Spade Records.)

The sweetness of the berry

Doesn’t take away the pain

Of the briar when it stabs you

But the power of your craving

For the fruit among the thorns

Is driving you to risk

The bramble does not seek to harm

It merely seeks to live

It injures without malice

There’s no question of forgiveness

No apology, no pardon

For minor wounds too numerous

This hurt will pass

Film and direction by Mawgan Lewis