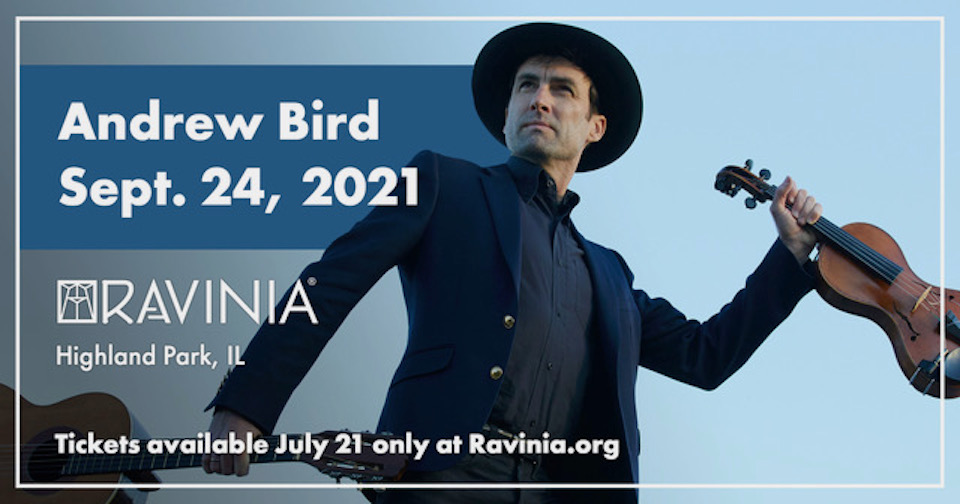 Andrew Bird announced his first headline, in-person show of 2021. After more than a year of live-streaming from various locations for his pandemic-inspired Performance Now! series, Bird will return to his Chicagoland hometown on September 24th for a momentous night outside at Ravinia Festival.

The career-spanning concert will see Bird performing fan favorites, joining together with Jimbo Mathus to play songs from their recently-released These 13 LP, and reuniting with the Bowl of Fire, his formative band of fellow Chicago-bred musicians. The event will feature support from Chicago’s own The Flat Five (Kelly Hogan, Nora O’Connor, Scott Ligon, Casey McDonough and Alex Hall), and the full Ravinia season lineup is available here.

Watch Andrew Bird reminisce on his high school days as a Ravinia ticket taker in a brand new, solo performance of his Stéphane Grappelli-inspired song, “Dora Goes To Town.”

In the meantime, Andrew Bird has also made the archives to all five of his Performance Now! live-streams available to rent via Vimeo. Fans can revisit Bird’s series of hi-fi, hi-res remote concerts from the orange groves of Ojai to Old Style Guitar Shop, including a split bill with Madison Cunningham, a 15th Anniversary tribute to Andrew Bird & The Mysterious Production of Eggs, a reimagined version of his annual Gezelligheid show — plus last month’s event with Jimbo Mathus, full of their classic Squirrel Nut Zippers collaborations and the brand new songs of These 13.

Dive into the full collection here.

Ahead of his anticipated arrival at Ravinia, Andrew Bird will have additional live shows to announce, including another special performance with Jimbo Mathus. To learn more about their close and creative friendship, watch the documentary on These 13, taking viewers behind the scenes of an album that the two of them have been wanting to make for twenty years.