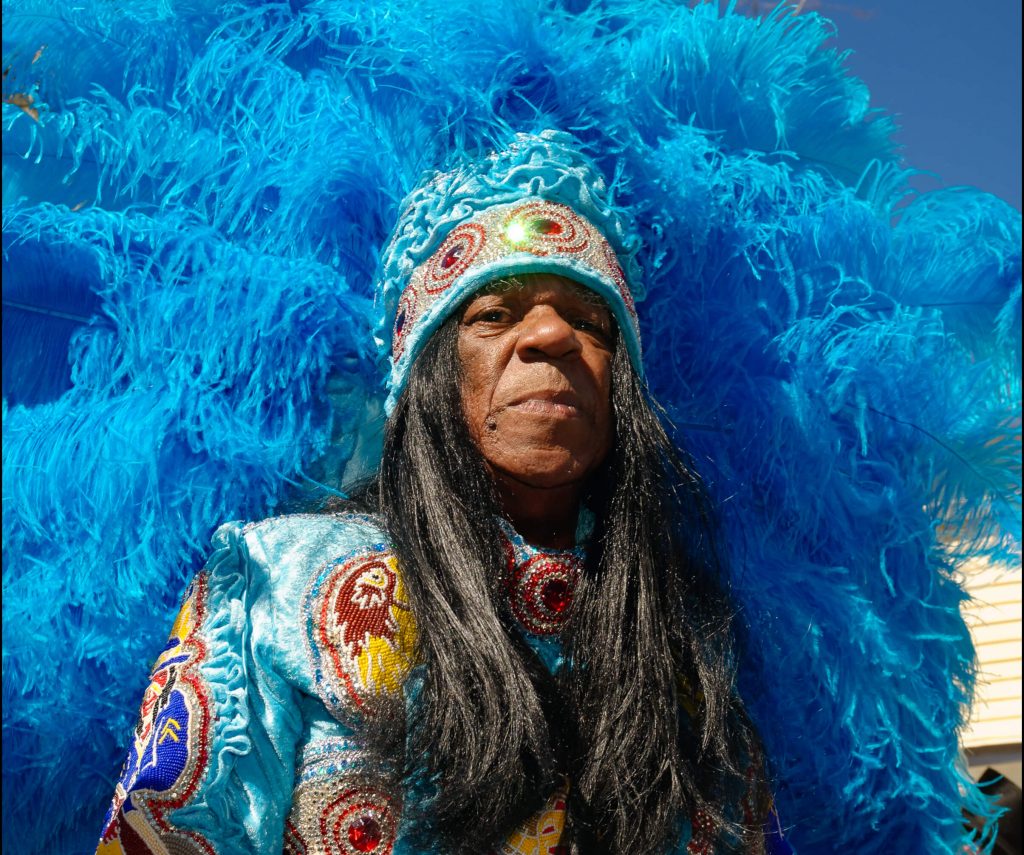 We exist in an age of living legends. Songsters, storytellers, and elders of all types share their infinite knowledge with the hope we’ll carry it on. Big Chief Monk Boudreaux is such a person. Boudreaux is the oldest living Mardi Gras Indian Chief, the elder of elders in a tradition dating back to the 1880s. He is also recipient of the National Endowment for the Arts National Heritage Award, and a well-loved American musical legend. His most recent offering, Bloodstains & Teardrops releases today via Tab Benoit’s Whiskey Bayou Records. 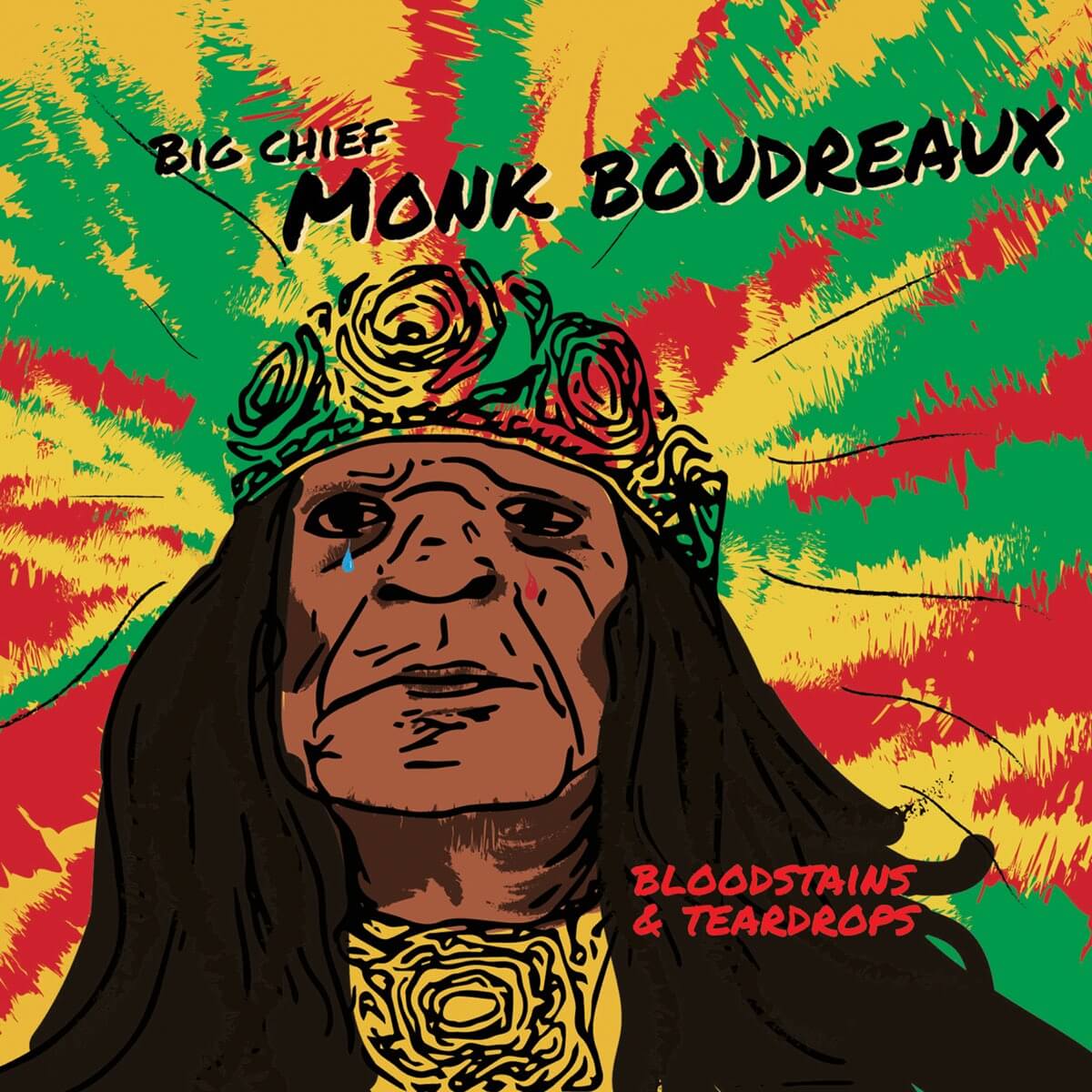 Produced by Benoit and Rueben Williams, the album opens with the title track, an almost pure reggae song. However, using his decades of experience singing as a Mardi Gras Big Chief allowed Monk to meld the story together from Kingston to his New Orleans home. With lyrics like “Lady don’t cry/Cause your son was shot down/On the street in our neighborhood,” Boudreaux could easily be singing about either city. And that’s the point.

Big Chief Boudreaux has made it his mission to promote the cultural cross-pollination that is our world today. By connecting the music of the Caribbean to that of the slaves in New Orleans’ Congo Square, he honors both his Cherokee grandfather and Haitian grandmother. But, as we’ve all heard on late night television – Wait! There’s more.

The project began in Jamaica, some six years ago, where Monk wrote the songs, on the spot, then recorded them at Tad’s International Limited studio with excellent Jamaican musicians. Then it was brought back to Benoit’s studio, where blues, Cajun, zydeco and swamp flavors of Southern Louisiana were added. It’s the perfect mix as one can hear immediately in the change from the title track to the swampy, country-esque, zydeco rhythms of “Should’ve Been a Preacher Man,” a song based on something Monk’s mother used to tell him.

The assembly of musicians for Bloodstains and Teardrops is epic in its scope. Boudreaux handles the vocals and tambourine; guitars come via Damon Fowler, Eric Johanson, and Tab Benoit (who also plays drums and keyboards); Corey Duplechin on bass; Michael Doucet on fiddle and guitar; Johnny Sansone on harmonica, accordion and guitar; and the Jamaican artists backing him are bassist Jason “Welsh Bass” Welsh; drummer Wayne “Unga Barunga” Thompson; and back-up singer Ali Meek.

“Mr. Okra Man” is another combination of zydeco and reggae. On this one you can hear the individual genres melding into an all too familiar New Orleans story. “Choo Choo” is a swampy train song, on which one can definitely hear Benoit’s influence. As Damon Fowler (who also appears on this album) once told me, “You’re gonna get some Tab on ya.” Benoit also adds some simple but effective keyboard on “Choo Choo” that’s right on time, and the overblown harmonica of Johnny Sansone is unmistakable.

It’s back to the islands on “Kick Me Down,” with Big Chief adopting a more Jamaican accent in his singing. Perhaps he’d been there a while already and was picking up the local intonation. “Blues, Blues, Blues” was completely unexpected. Just when I was prepared for some traditional NOLA blues, the reggae beat began again, but, the lyrics and the way they’re laid out are very traditional indeed. It is a curious combination, but one that makes me very happy.

Then came the next surprise. “Kingston Blues,” which I thought surely would be a Jamaican take on American music, is pure slow drag blues, the kind of music you’d hear coming from any late night club from The Windy City to The Crescent City. Greasy, crying guitars match Big Chief’s original lyrics note for note, playing off one another like BB and Lucille with the words describing Monk’s first visit to Jamaica.

“On Bended Knees” continues the more traditional blues road, again with Sansone’s harp stabbing into the rhythm like a chrome dagger. “Blue Mountains” has a late 60s rock and roll feel to the music, and at almost 80 years old, Big Chief Monk’s voice is strong as a man half his age, with a growl that comes from his decades of experience.

Bloodstains and Teardrops closes with “Indian Blues.” To me, the perfect closer to this Jamaica-Louisiana musical highway.

Boudreaux is a long time fan of Bob Marley, and, as he found out when he visited there, Marley was a fan of his. Both men are familiar with and sing about the struggles of their people. Reggae, some say, was born out of the early New Orleans R&B being skipped on AM frequencies to Kingston.

Bloodstains and Teardrops is an excellently produced album from a near-octogenarian cultural and musical icon. Big Chief Monk Boudreaux has once again imparted his wisdom, and carrying it forward begins when we drop the needle.