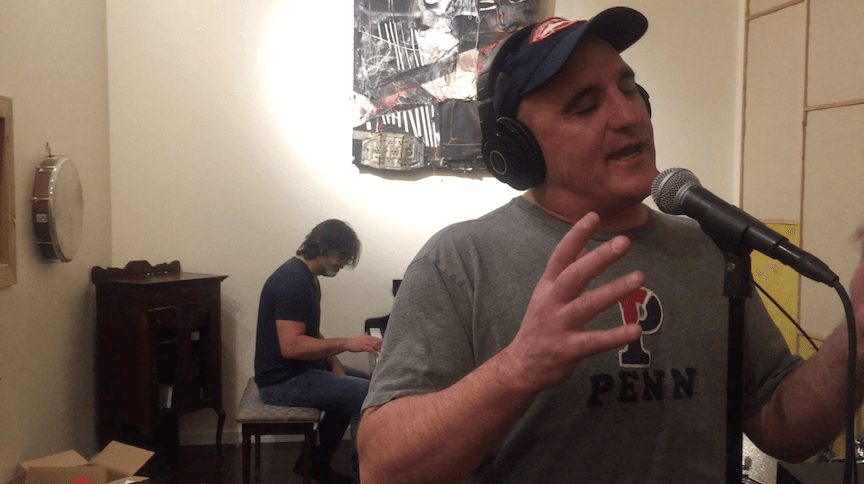 The expression of songwriting established a fixity of purpose in the mind of singer-songwriter Cosmo Iacavazzi at an early age. But it was his best friend from his Hillsborough, New Jersey childhood, Andy Castin, who penned the poem that became the song “We Live Forever.”

“Andy’s great friend from college, Darin Petro, recently lost his battle with cancer,” Cosmo explains to ABS. “Andy wrote a poem expressing the feelings and situation at one of their last gatherings as college brothers. He sent it to me to turn into a song. It was wonderfully crafted and the initial verses came pretty natural once I started strumming some chords.”

“Then one Sunday I woke up actually a bit hurting from a beautiful celebration the night before.  It was a gorgeous Summer day so I grabbed my guitar and went to Tyler State park in Newtown, PA. I sat at a picnic table and watched mothers and fathers playing with their children and decided there was going to be no pressure to write a chorus or change today. And then I realized that the chord change needed to express tension. Because fear, anxiety and anger need a sincere sound. We can’t get around it. The Em chord in a song that’s keyed in G is a great candidate.”

And with that Cosmo realized that new tension expression was the missing piece of the puzzle. It then became:

Easy to see that we indeed, through loving bonds in the face of despair, Live Forever.

“To be a part of remembering Darin and his brothers is my greatest honor as a musician,” Cosmo continues.

Playing the lead guitar solo is Mike Salerno. After not having the final touch at the initial recording session, he too had to let the song marinate in his brain. However, “Mike nails it! We just asked him to let us know when he was ready to lay down that solo. He did, and Darin’s muse delivered. I’ve never seen a guitarist so sure of a part. We scheduled it and he ripped the tearful performance on the very first try. We were blown away. We still had an hour on our recording session, so we toasted to Darin with a fine Belgian ale and bonded in his memory.”

As Andy was working through the hardest stages of grief, he wanted to find an indelible way to honor his fallen friend. “I was at one of my daughter’s volleyball tournaments and was sitting by the water by myself ‘with a dogfish in hand’ and started to think about Darin and I started writing down some thoughts on my phone,” Andy recalls. “The last time I saw him was at his house with a handful of friends. There was an underlying sense of death hanging over the gathering as we looked through some old pictures to lighten the mood. That day sparked the idea of a song. Then I thought about Cos and how cool it would be to work with him on this project, as he knew Darin, and had the same type of bond with his fraternity buddies in college.

“The next phase of the song came to me when I was driving my other daughter and two friends back to college in Maryland. I looked back at them and saw the youth we all once had and it conjured up memories of Darin when he was that age. That’s how I will always want to remember him.”

For Andy, who has experience in TV/video production, producing the song was also fulfilling. “Those creative juices started to flow again as we were going through the process. As all creative projects go, you do what feels right and let it fall where it falls. This was about honoring him with the right song, not worrying about whether other people would like it. However, we did feel like we had something. Once we started to share it with friends and family the feedback was overwhelmingly positive.

“Mike Salerno is also from Hillsborough, so it was great to reconnect and collaborate on this song. Once we explained what the song was about, he was on board right away. He really wanted to ensure Darin’s spirit came through in his guitar tracks, and it did.” Salerno’s parts themselves sound like the calm that washes over one who is starting to pick up the pieces and reconstruct following a tragic loss — the delicate backdrop dovetailing perfectly with Cosmo’s vocals sung straight from the heart.

Andy continues, “Jack Dratch did the drum track, and he nailed it too, and we never had to change it. His father Rob was also one of my best friends from Muhlenberg College and a close friend of Darin’s as well, so it was only fitting that we had Jack on the record. He is a very talented musician who is attending the University of Miami’s Frost School of Music.”

Andy created a “making of” video, which can be found on his YouTube page. There are some other video clips of the sessions and one of Cos singing the song live. Musician and studio engineer Ben Runyon mixed and mastered the record.