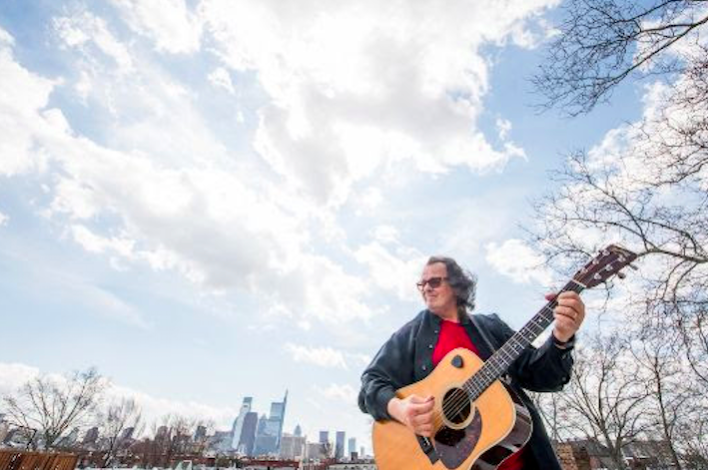 Jefferson Berry and the Urban Acoustic Coalition, whose polished instrumentals shuffle together like the untroubled waters of a deep and rolling river, are a delightful blend of all my favorite instruments: acoustic guitar, mandolin, lap steel, banjos and harmonicas.

“It was a pretty big day, I guess” Jefferson Berry tells me after a bit of phone tag. He’s just returned from cutting an Instagram video with the owner of the nightclub where he will be doing his record release show at the end of the month. The record? Soon! — released last month. The album has a common thread that runs through it, which is the only thing that’s kept us sane this past year: the notion that this will be over soon.

“And I had sort of timed it out in January thinking, ‘This pandemic should be over by Memorial day.’ He’s kind of planned this out, too, and has done a lot of renovations. And we’re touting his new HEPA filter ventilation system. I think it’s going to be safe. This is an indoor nightclub. Let’s get drunk and rock and roll.” I can’t remember the last time I went to a real show, and Berry hasn’t played one in over a year. “But the governor of Pennsylvania is lifting all distance restrictions for the state on Memorial day.”

The pandemic sort of shifted Berry’s songwriting in terms of what urban acoustic music is, which by his definition is telling stories about the city through the medium of folk music, but for city folk. “You know, using a lot of out-of-town chords,” he elaborates. “Not really sitting into a lot of the traditional folk. But the songs that I wrote needed meaning in the moment.” He wants to give people something to look forward to in what he calls a lost year.

His use of the word unnatural I find resonates with me, as I’ve been using that word myself since the onset of the pandemic. When I think of what kids of all ages have been experiencing, my own child, and the ravaged global psyche, the only word that has come to mind this past year has been ‘unnatural.’

“The songs ‘We’ll Soon Be Together’ and ‘Party On The Roof’ both have the word ‘soon,’ and even the CD concept — having birds of sunrise — is just looking forward to the next day. Looking forward as opposed to looking back. Because if you look back there’s just not a lot there.” As for the recording process, that was different in that he had to get people feeling safe enough to do it at all. “We laid down basic tracks with guitar, bass and drums first, and then we brought people in to do the stuff on top of that. So the people coming in, they’d be the only person in the studio, with dubs. But getting the basic tracks for all nine songs is kind of hard.”

The whole idea of Urban Acoustic is that it’s a rock band playing hillbilly instruments, and its personnel only seems to get better. “This is the fifth album I’ve done with Bud,” he says. “The fourth album I’ve done with Dave Brown on banjo, lap steel and all the other things that he does. It’s the fourth album with my harmonica player (Marky B!). Uncle Mike and I — this is our second record together, and he and I are just joined at the hip at this point. I talk to him every day. And there are going to be a lot of shows that he and I do. We’re going out to the west coast to tour radio stations, do a couple of small opening gigs to develop our stuff. It’s not going to be remunerative, but it will be fun.”

With a souped-up harmonica, “Pass You By” (Gillian Welch/David Rawlings) gets reimagined on Soon! Paul Kantner’s “When The Earth Moves Again” is also featured on the album. These songs in particular confirm the soloist skills of Bud Burroughs, Marky B! Berkowitz and Dave Brown.

“I saw Gillian Welch the first time at the Falcon Ridge folk festival about 15 years ago,” he shares. “I was just really taken by her genuine kind of thing. She also went to the University of California, Santa Cruz. She’s also from Los Angeles County. So a lot of who she is, is not what the sound of it is. I’ve been playing ‘Pass You By’ for a while. It struck me that this would be a great harmonica song, so I decided to put it on there. We had probably 20 songs recorded, because I just wanted to see how my arrangements worked. And the arrangement with Marky B! on the harmonica on that was pretty irresistible.”

The Paul Kantner-written song Berry always played at folk festivals — at 2:00 in the morning, when all the hippies were rolling around in the mud and wanting to hear their favorite songs. “Nobody covers that. So when I covered it there, people were like, ‘Oh, yeah!’ I’ve never heard the harmonica work together with the mandolin so seamlessly as in the UAC’s rendering of ‘When The Earth Moves Again,” while Berry’s vocals preserve the classic rock essence of Jefferson Airplane.

“That’s just the crazy thing about Paul, though,” he offers. “I met Paul Kantner in San Francisco when he was a part of the Starship, actually. And they were in that part of that Starship era that was practically adult contemporary. I was doing promotion for a rock station out there, and we had the Mabuhay Gardens on for a promotion briefly. And there was Paul Kantner in there with the punk music. And then I saw him later in the East Bay at a Black Flag concert.”

Mentor to bassist Uncle Mike, and UAC fan, is none other than bassist Jack Casady.

Berry cites movie soundtracks as some of the most influential albums, soundtracks like Once Upon A Time In Hollywood. The film, an alternative history to the Tate-LaBianca murders, sees Brad Pitt and Leonardo DiCaprio going through Southern California in the late ‘60s. “The soundtrack for this movie is my childhood. Just all the hippie music from ‘68 to ‘72; it’s on the soundtrack. You know, those are my formative years. I think when you’re somewhere between 13 and 16 years old, that’s the stuff that really forms you musically.”

He continues, “The other movie that stands out for me on this was the thing that Jakob Dylan did on Echo In The Canyon.” Sometimes certain songs can dredge up certain memories, even olfactory ones. “(Jakob) does a thing with the Mamas and the Papas and Crosby, Stills, Nash, and Young, and Joni Mitchell up in Laurel Canyon. And I could smell Laurel Canyon from my younger hippie days.” Another reimagining of note is Neil Young’s “Crime In The City” — from Jefferson Berry & the UAC’s 2020 album, Double Deadbolt Logic. “Neil Young’s a pretty big influence. I got an invitation to play a Bob Dylan birthday party coming up at the end of May, and I’m going to be playing a real rocked out version of ‘Highway 61.’ “

Berry has the challenging and all-too-often heartbreaking job of inner-city Philly high school teacher. “We’ve had a lot of kids get shot.” So his favorite song on the new album is “Changes in Kensington,” an honest and harrowing tale of the cycle of poverty. “Kensington is a part of Philadelphia that has some serious deep poverty and open drug markets. There’s a bit of mass incarceration in that song. But like any good protest song, it makes your butt shake. I really like the treatment Bud Burroughs gave that song on the Wurlitzer. I said, ‘Why don’t we try that?’ And he said, ‘That’s probably a pretty good idea. And he sat down and really changed the whole arrangement. People can’t get their eyes off of him when we’re playing live. He’s just phenomenal. He’s the keyboard guy. He’s the mandolin guy. He’s the guy who says, ‘Maybe you want to hit that on the one.’ He’s so musical, so mathematical. I’ve got the best players in Philly. I really do.”

Another song that jumped up in the sequence is “Cloudy Day Daydream,” with its wonderfully winding pedal steel parts. “It’s just wild. I love it. And the other studio musician we had was Meaghan Kyle, who was so tremendous that she’s joined the band. She was the leader of No Good Sister, which for quite a while here were the number one Americana band in Philadelphia.”

In memory of tastemaker Gene Shay, founder of the Philadelphia Folk Festival, Berry wrote “That Guy Was Fun.” Throughout his career, Shay discovered dozens of folk, blues and Americana. His early interviews include Joni Mitchell, Jackson Browne, John Denver, Tom Waits, Phil Ochs, Bonnie Raitt and Judy Collins, some of which have been bootlegged. It was Gene who brought Bob Dylan to Philadelphia for his debut concert in the area. And as an advertising writer-producer, he also wrote the original radio spots for Woodstock. Gene came up with the name “World Cafe” for the nationally syndicated series produced by WXPN. He received a Lifetime Achievement Award from the Delaware Valley Music Poll in 1994.

Berry organized and hosted the WXPN event ‘That Guy Was Fun: Gene Shay’s Birthday Bash’ this past March. “Truthfully, if you were to take a thousand of Gene Shay’s friends I would be in the last 500. The guy was such a big deal here, founder of the Philadelphia Folk Festival, a radio show that always got ratings… But in those moments that you could get with him, you were the most important person. He always played all my records as I put them out, even if they weren’t that folky.”

Berry himself was in both the radio and advertising business for 30 years. The largest difference between being a state-commissioned advertising salesman and an inner-city high school teacher of government and economics is the pay. But the real difference is the satisfaction he gets from teaching. “I haven’t really missed the money at all. These kids, I see them on the street — because I live in North Philadelphia, too. Even the kids I fail, I see them on the street and they say, ‘You were fair to me. I learned a lot.’ I teach them what to say to the police when they get pulled over. Now that’s a good government lesson.”

One thing I can say after listening to Soon! is no one is rocking and jamming Americana by virtue of storytelling quite like this corporate refugee and his Urban Acoustic Coalition.