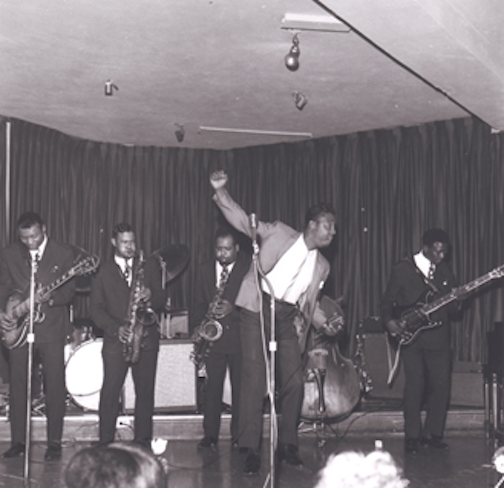 Craft Recordings announces the release of two new collections celebrating the music of pioneering funk band Dyke & The Blazers. Available June 25th on digital platforms and vinyl, the titles include the 20-track Down on Funky Broadway: Phoenix (1966–1967) and the 21-track I Got a Message: Hollywood (1968–1970). Together, they span the group’s short but impactful career with new stereo mixes of old favorites, a trove of previously unreleased material (including demos, radio spots, and unearthed songs), and freshly remastered audio by acclaimed engineer Dave Cooley. Both albums are currently available for pre-order today, while two instant grat tracks (“Funky Broadway (Part 1)” and “Let a Woman Be a Woman – Let a Man Be a Man”) can be streamed or downloaded now (listen here).

Additionally, booklets for both LPs feature rare imagery of the band and ephemera, plus new liner notes from the compilations’ producer, Alec Palao. Accompanying oral histories also provide deep insight, thanks to new and archival interviews with band members and other key players, including manager Art Barrett, and legendary radio personality Art Laboe, who released Dyke & The Blazers’ music on his Original Sounds label.

Long coveted by cratediggers and beatmakers, Dyke & The Blazers was one of the earliest funk acts to emerge in the mid-’60s soul scene, alongside artists like James Brown and The Meters. Hailing from Phoenix, AZ, the band was known for their tight guitar riffs, grooving jazz organs, upbeat horns, and frontman Arlester “Dyke” Christian’s coarse yet commanding vocals.

The group was formed in 1965 when Christian and two former bandmates—guitarist Alvester “Pig” Jacobs and saxophonist J.V. Hunt—joined forces with a local trio called The Three Blazers (consisting of tenor saxophonist Bernard Williams, organ player Rich Cason, and drummer Rodney Brown). Dyke & The Blazers gained an avid local following and recorded their first single, “Funky Broadway,” in 1966. The tune—in which Christian referenced the Broadway in his native Buffalo, NY, as well as Broadway Road in Phoenix—marked the earliest-known charting single to include the word “funky” in its title. The song also became the title track to Dyke & The Blazers’ sole studio album, released in 1966.

Soon, the single made its way to Los Angeles deejay Art Laboe, who signed the group and reissued “Funky Broadway” on his label, Original Sounds. By early 1967, the song was a national hit, peaking at No.17 on the Billboard R&B chart and at No.65 on the Hot 100. That summer, soul star Wilson Pickett recorded his own version of the song, making it one of the biggest R&B hits of the year. Pickett’s rendition of “Funky Broadway” landed at No.1 on the R&B charts and crossed over to the pop chart’s Top Ten. A multitude of other artists would also cover the song, including Diana Ross with The Supremes and The Temptations, Jackie Wilson and Count Basie, and Steve Cropper.

Despite their early achievements, Dyke & The Blazers’ original lineup dissolved by the end of 1967. From then on, Christian would be the sole member of the group, with accompaniment by a variety of touring and session musicians. Under the direction of Laboe, Christian recorded his new material in Hollywood at Original Sounds’ state-of-the-art studios, where he was backed by the tight players of The Watts 103rd Street Rhythm Band.

Christian proved his talents with charting singles like 1967’s “So Sharp” and 1968’s “Funky Walk,” but he scored his biggest hits in 1969 with “We Got More Soul” and “Let a Woman Be a Woman – Let a Man Be a Man,” both of which hit the R&B Top 10 and the pop Top 40. He also found success with the swinging and delightfully titled “Uhh” in 1970, followed by an inspired rendition of “You Are My Sunshine” that was equal parts searing and soulful.

Just as Christian’s career was rising, however, his life was tragically cut short. On March 13, 1971, the 27-year-old artist was fatally shot in Phoenix. At the time, he was prepping for a tour of the UK as well as a recording project with soul star Barry White.

But Christian left behind an indelible mark on musical history, and over the ensuing decades, Dyke & The Blazers’ influence only continued to grow. In his notes for I Got a Message, Palao argues that the group “was responsible for some of the essential building blocks for rap in the late 1980s.”

Indeed, memorable breaks from “Let a Woman Be a Woman – Let a Man Be a Man” were sampled countless times by key figures in hip-hop, including Public Enemy, 2Pac, Cypress Hill, Stetsasonic, and more recently, Tyler, the Creator. Alt-rock fans, meanwhile, will recognize the song’s opening bars in The Heavy’s 2009 hit “How You Like Me Now?” Additionally, tracks like “Funky Broadway,” “We Got More Soul,” and “Runaway People” have also been regularly sampled over the years.

In his notes to Down on Funky Broadway, Palao elaborates on the group’s enduring appeal. “The unique noise that Dyke and the players developed in the relatively isolated—musically speaking—desert environs of Phoenix, Arizona, was unaffected and real. It projected in sound the same sort of statement that their raw-voiced frontman, in his evocative description of the street and its importance to the black community, was making. Dyke’s metaphor of Broadway, and its ‘dirty, filthy’ ennui, was entirely appropriate—this was dirty, filthy music, and soulful to its core.”

He adds, “Dyke was an easy artist to relate to, because he truly was far more of the street. The street didn’t want complex productions or technical expertise, it simply demanded a sound with which it could identify. And Dyke & The Blazers surely provided that for them.”