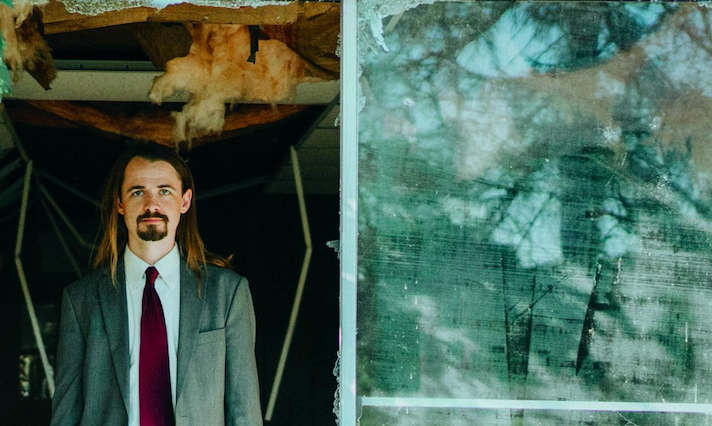 New Jersey-based singer-songwriter and unabashed rock and roller Keith Kenny may not have originally set out to become a one-man band, but he damn sure fulfills those expectations. Watching his father play folk guitar as a child, he admittedly wasn’t that interested in playing music. That began to change around age 11 when his dad gifted him a bartered Japanese guitar (that may have been missing a string or two). Never cohesive the band lineup, dating back to high school garage bands, Kenny eventually started putting sounds together with drum machines.

Kenny started simulating the sound of a full band over a decade ago with his first shows at Asbury Park’s iconic Stone Pony. He has since toured throughout the United States, Europe, and Asia — sharing stages with Leon Russell, Ween, The Dean Ween Group, John Butler Trio, Keller Williams, John Hammond Jr., New Riders of the Purple Sage, etc.

Now on his fifth release, Lifetime Ago Motel, he’s going great guns with homespun vocals, percussive guitar techniques, drum loops, and effects pedals — throwing in a customized red vintage suitcase as a kick drum for good measure. Written over a three-year period and recorded at Studio 303 in Monroe, New Jersey, Lifetime Ago Motel was self-produced by Kenny.

While Kenny was on the road promoting his last self-titled album — produced by 3-Grammy winner Justin Guip (Hot Tuna’s touring drummer and sound engineer for Levon Helm) — he ended up writing the bulk of Lifetime Ago Motel. With dates that included opening up for The Dean Ween Group and a House of Blues residency in Las Vegas, things weren’t exactly what they seemed. Touring with Dean would hamstring his efforts at finding happiness with life on the road. Kenny’s marriage to his new wife was sadly ending because of time spent away, and he was barely breaking even. The sadness he experienced while he was promoting the last album is what you hear on this latest release: an innovative, passionately charged musical artifact greater than the sum of its component parts.

“For me, the album is an expression of all the different feelings you go through during times of despair or loss,” Kenny explains to me. “Change is inevitable, and this album is a portrait of someone accepting change.”

Conceptually, Lifetime Ago Motel is actually more concise than Kenny’s previous albums. “I tend to jump across genres and musical styles a bit, so I think sometimes it can be challenging for me to find the thread that ties it all together. I was going through a traumatic time in my life with a recent divorce and I think that gave this album a lot more focus. Instrumentally, I was experimenting with a lot more synth & electronic drum pad sounds which were really fun textures to add to the one-man band sound.”

Sometimes he wonders if he would have ever finished the record if not for the pandemic. “I had been working on this thing in the background for the past three years, between tours and other recording projects. So, when all of that came to a sudden halt, I was able to focus in on each track and put the finishing touches on it.” As far as the writing process goes, the pandemic was somewhat stifling for Kenny. “I typically write from experiences and often get the most inspired after seeing other musicians play.  So, with life just completely slowing down, I didn’t feel too inspired to write. I’ve heard that a lot of other artists have experienced the same thing, so I’m trying not to be too hard on myself about it. The music will come when the time is right.”

Though he is a band of one, he had some special guests accompany him in his studio — chief among them being Sim Cain (of Dean Ween Group, Rollins Band, etc.). Cain provided the backbeat for such gems as “Waiting For The Kill” — vocally and instrumentally an entrancing ode to all the bands of the ‘90s that mattered. “This was our first collaboration together, and hopefully not the last! Sim has an amazing musical sensibility and comes up with great parts that really elevate the songs. I had sent him some demos of the tracks and he came by the studio. I think we spent more time getting our drum sound dialed in then we did working out the actual songs! He had all the parts ready to go; it was awesome.”

Kenny has had the last few years to put things into perspective, the emotional growth contributing to the evolution of his songwriting. “I noticed during some of the harder times that I was anticipating the worst outcome before I gave myself a chance. It’s really important to give yourself the time you need to experience grief and to be OK with it. I think it’s definitely changed my perspective to be more open-minded and to consider other people’s experiences before being too quick to judge.  I think my songwriting has matured and become more transparent as to who I am. There is still so much more room to grow, and always more to learn.”

Each song has a special meaning to him, but ultimately he wants the listener to extract their own. “I remember finding out that Neil Young’s song ‘Long May You Run’ was about a car. As genius as that is, it totally changed the way I listened to it.

“Some of the standout tracks for me are ‘Burr’s Roach Jam’ — just because of how incredibly fun it was to put together and jam on.” The song evolved out of Dean Ween’s weekly jam nights at John & Peter’s in New Hope, Pennsylvania. There the two built upon the riff each week, making it better each time.

“I really poured my heart into ‘You’ll Always Be That Star.’ I think the writing process of that one was the most cathartic. Julie Myers did such a beautiful string arrangement and I’m really happy with how it came out. ‘Little Lies’ is another one of my favorites just from the production end of things. I really stripped that one down and approached it more like a producer than a guitar player and it’s a different sound for me.”

As someone who has seen Ween – Live in Chicago countless times, I just had to know what playing with them and working with Dean was like. Ween completely overthrow the existing order of genres — a band whose slow, sit-down song is as immersive an experience as a faster, intriguingly textured song. They can play anything and everything, and extremely well. Like the guys in Ween, Kenny holds fast the belief that music is music — running the gamut of styles without trying too hard to be different.

“Working with Dean Ween has been an amazing honor and I’ve learned so much from him,” Kenny enthuses. “My first real encounter with Deaner was during a Moistboyz show at John & Peter’s. Their lead singer, Guy Heller, organized this awesome rock festival called North by New Hope and I was on the bill with them that night and was totally floored by their set.  It was just one of those unforgettable moments. The bar was on fire!  Both Guy and Deaner have been so supportive of my music and it’s given me so much inspiration to keep working at it.

“We started jamming every week at the Invitational Jam and I started to dive into a lot more of Ween’s music, and that was another huge inspiration. I love that they don’t get stuck in one genre.  I think we all love so many different styles of music that inevitably the music is going to portray that. A big part of what fuels my ambition is discovering new music so getting turned onto the whole Ween community has really been the greatest gift.

“ ‘Burr’s Roach Jam’ was one of my favorites to record on this album, and I think it has the best backstory.  I was doing a west coast tour with my tour manager, Bob O’Donnell, and he had an old friend named Burr who lived in Monterey, CA. We ended up having a gig in Monterey and it was a bit of a logistical nightmare for me. I had to rent a PA for the show and the music store wanted like an $800 cash deposit for the thing. So, there were all these hoops to jump through just to get the show going. But anyway, Burr came out to support the show and offered us a place to crash for the night. We ended up hanging down in his basement until the wee hours of the night jamming and having a good ol’ time. That’s where I came up with the riff and the first 15 seconds of the track is my phone recording of Burr and I jamming on it with my tour manager rambling on about roaches in the background! ‘You know the gig is ovaaah… The P.A. is in the VAN!’ “

As venues start to open back up for live music, Kenny anticipates various outdoor and limited capacity events. “I’m excited to get out and play these songs for REAL PEOPLE! As far as touring goes, I still think it’s a ways off for me. Logistically it is just too challenging right now with certain places having more restrictions than others. I’m hoping to get back on the road soon. I might have a new album to promote by that time.”