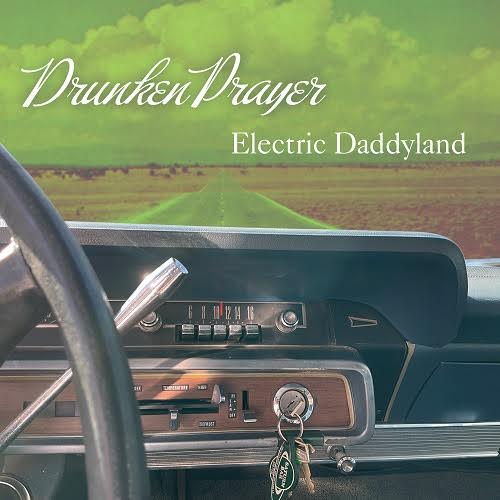 Fathers and sons, death and remembrance, searching and loss, art and reflection, technology and impermanence, meditation and sonic drift, vibrations that ripple into the void.

The North Carolina-based songwriter and guitarist Morgan Geer lost his father this past year. Geer, (a sometimes member of always-weird-Americana outfit Freakwater) who performs and records under the name Drunken Prayer, pays haunting and spaced-out tribute to his dad this Father’s Day with the release of “Electric Daddyland,” an atmospheric bluesy death-raga collage that repurposes and sets to music numerous voicemail messages that Geer’s father left for him on his phone as he declined due to Parkinson’s Disease.

“I’m trying to find you, Morgan,” his father says, his voice weakened, but chipper. The words become a refrain, taking a mundane message and slowly morphing its meaning into something more existential and profound, with the suggestion of linkages beyond the body and ties that hold and reverberate beyond the limits of our biological life. The passage of time, and our airy and ethereal connections to one another percolate through the drone and shine of Geer’s guitar, as it gently descends and climbs on its cyclical path, with flickering effects and hypnotic reverberations. Harmonica and a child’s voice (courtesy of Geer’s son Leon) come in, hinting at a multi-generational continuum and sing-along fellow feeling.

Geer’s dad was something of a “swashbuckler,” according to the songwriter. An Alabama idealist with mystic leanings, he marched with Martin Luther King Jr in the early ‘60s, and eventually made his way out to San Francisco embracing the emerging hippie consciousness, joining a commune in Oregon before eventually going on to study acupuncture and traditional medicine in China. He climbed Mount Kilimanjaro in Africa, grew mushrooms in California, raced British sports cars in Florida, and had deep ties to the teachings of the Armenian/Greek/Russian spiritual philosopher G.I. Gurdjieff.

“Electric Daddyland” is both a departure from the sturdy, melodic, wry and deep songs that Geer crafted for 2020’s Cordelia Elsewhere, and a continuation of that album’s meditations on home and displacement. With slide guitar, organ, and collaged layers of voice, the end result is a brooding but mellow cinematic outing that evokes the ominous feedback-and-driftwood aesthetic of Neil Young’s Dead Man soundtrack. The accompanying video, with its vast expanses of the American West and the dreamy lull of graffitied boxcars, boxcars, boxcars, gyrating skeletal Statue of Liberty bobble-head figures, and flickering reflections presents a visual analog to the music.

There’s something Whitmanesque about it all: the particle subsumed into the cosmic swirl, the ineffable communion of souls, the beautiful, crass open road. “Electric Daddyland” is like a film score for a road movie of the mind, one about memory and the passage of time, the slow erosion of self into the big slop of overarching nothingness. This is music that could have emerged from a highly blissed-out biker bar or at a swampy ashram. Or maybe something tape manipulators like Steve Reich or Alvin Lucier would have done in a more sentimental mood.

Geer’s father was mostly not a part of his life until the songwriter turned 17, and so that loose and spotty long-distance connection characterized their relationship. “It made his death a little easier, in that I’ve been dealing with his absence my whole life,” says Geer.

Relationships are always a two-way street, though. And Geer highlights the fact that the voice messages from his father used in this project were essentially records of times Geer himself didn’t pick up for one reason or another.

“Looking back on it, I’m still particularly moved when I realize these are the calls I didn’t answer, and there’s a lot of them.”

It’s hard not to get a little choked up when you hear Geer’s dad sign off towards the end of this 16-minute excursion with “Ok, love to everyone, bye-bye.”