Memphissippi Sounds: ‘Welcome to the Land’ 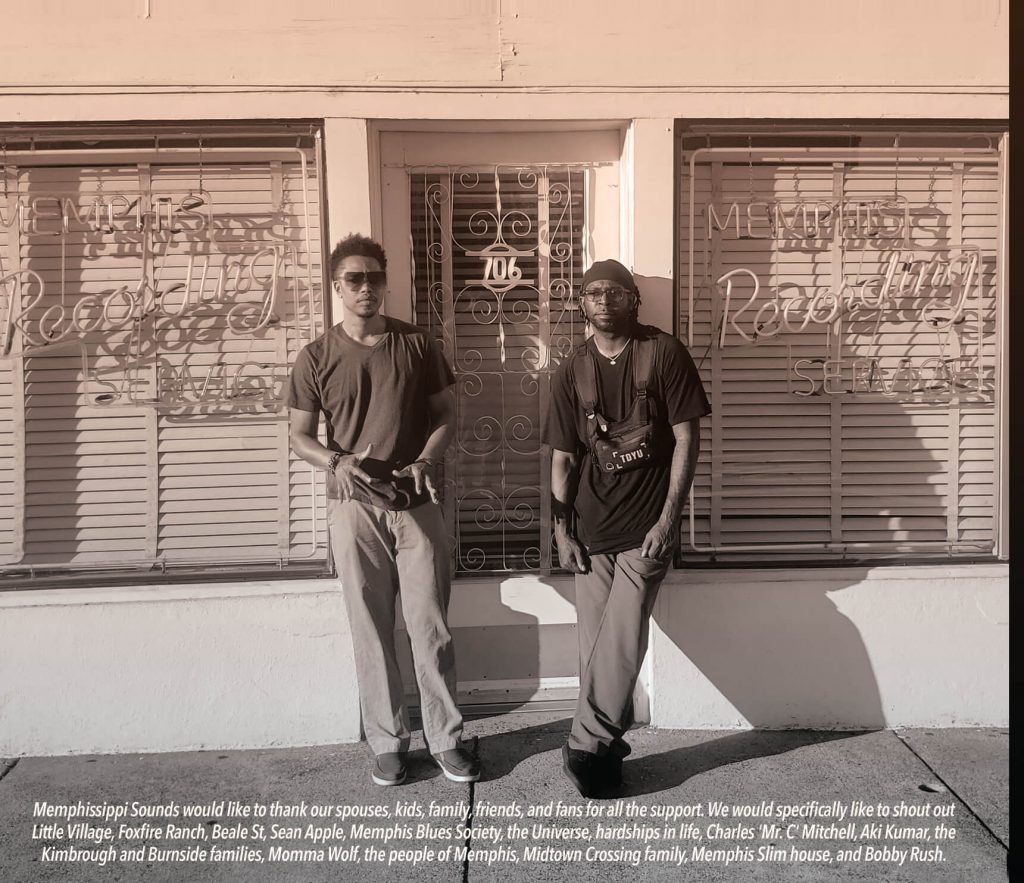 Two young men playing original blues, the one-chord trance drone chanting form that preceded what most folks think of as the traditional 12 bar/ AAB lyric structures, might seem like a musical anachronism. But when the song’s vocal chant kicks in “get cha foot off my neck,” you know it’s 2021 and as modern as can be. 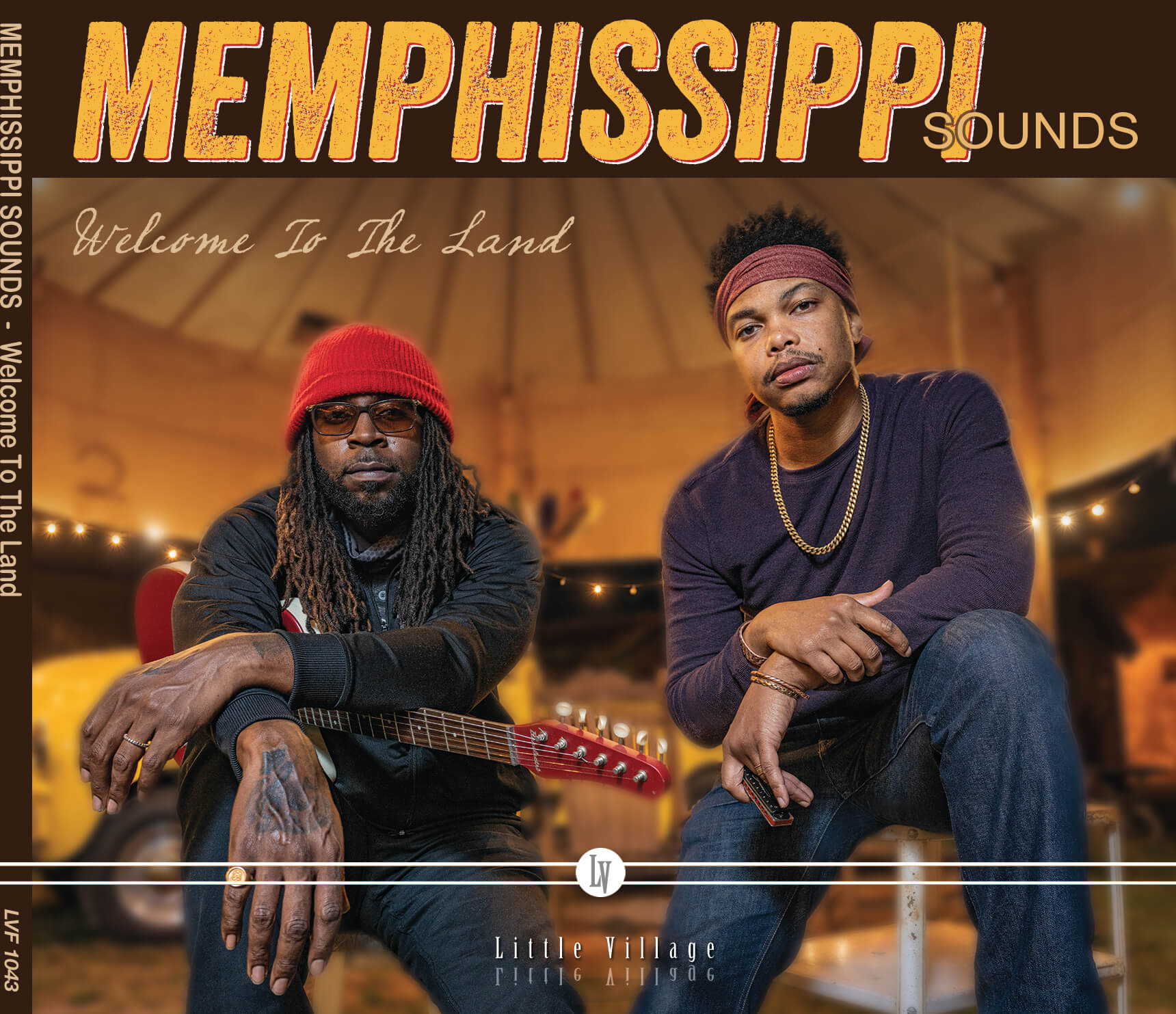 This is the work of Memphissippi Sounds, the duo of Damion “Yella P” Pearson and Cameron Kimbrough. Their new release from Little Village is called Welcome to the Land, and it will be out October 15th . It was recorded at Memphis’s legendary Sun Studios and produced by Aki Kumar, a Little Village artist and board member who plays a very mean harp himself.

As we know you can guess, Memphissippi is a partnership of musicians (Damion, harmonica, and Cameron, drums—both play guitar and sing as well) from, respectively, Memphis and North Mississippi, which are essentially adjacent and also
worlds apart.

Music hasn’t changed so much in North Mississippi, so it’s less surprising that Cameron was in touch with these original blues, particularly because his grandfather is the well-known Junior Kimbrough.

But Damion grew up on his father’s record collection, which featured George Clinton and Parliament/Funkadelic and the Ohio Players. Local and national rap and hip hop, from Playa Fly and Dr. Dre mixed with church every Sunday growing up. He picked up on blues from Memphis’ stalwart blues station WDIA, and he studied it seriously, “the older the better for me,” from John Lee Hooker to Muddy Waters, Howlin’ Wolf, Jimmy Reed, and both Sonny Boys. His family was first-generation Memphis, and the rest of the family still lived in Madison County, Tennessee, some in town and some on the farm, so he was never too far from the blues.

Cameron, from the North Mississippi country village of Pott Camp, “deer hunting, four-wheel riding,” did indeed grow up surrounded by the blues….and a few other forms of music. His early favorite was Metallica’s “No Leaf Clover” with the San Francisco Symphony. “It was so dramatic.” It led to System of a Down, Nirvana, Incubus, and rap, as well as the Holly Springs Saturday morning blues, “a southern soul circuit type of blues.” He moved on to years of playing R &B, but his life blew up in his late twenties when the trucking company he worked for got caught selling commercial driver’s licenses and Cameron lost his job, his truck, his house, and his life to that point. Suddenly, the blues were truly meaningful, and he held them close.

When Cameron and Damion met up, something clicked instantly. Damion had never heard hill country old-school groove music, but as soon as he did, he realized he’d been a fish out of water with more conventional blues. “I play with a lot of feeling, which is deeper than a lot of guys on Beale Street doing the 12 bar, so I always felt like I was out of place. Then I found Cam and realized, this is where my music is, my harmonica can really take off with him and with this kind of music. I was having my own kind of feeling and that feeling, once I really honed in on it, just worked with this type of music. Like James Brown said, ‘Trust in the one,’ and follow the groove.”

Cameron felt the same way. “I think Damion pretty much fed off of my energy of what I was playing, you know, he’s a really top guitarist, and so he had the technical way of doing things and I had the spiritual way of doing it. And I think he combined his spirit with my spirit and it just kind of took off from there. We didn’t have any conversation, we just started playing together. Actually, we were walking around somewhere playing on the street and we caught people’s attention and that’s when we started to realize that maybe we got something, because we was just having fun with it, but when we played it seemed to draw people in, and people started asking us what our name was.”

Enter Aki Kumar, who’d met Damion at a harmonica workshop in Holly Springs. After “stalking” him on his Instagram page, Aki found out about Memphissippi Sounds and proposed recording. Damion steered them to Sun, which pleased his partner. “Man, I was geeked to be in there recording. I knew, you know, that we might not go platinum, but we got some juju on this one. I was surprised at how fast the engineers worked. Aki really surprised me because he really did play a large part of the ideas that kind of came together …Just his presence and the way that we all worked well together in that studio. It was like clean, pristine. Everything was fast if you wanted something. They made sure it happened. It was just a smooth operation.”

In his first stint as producer, Aki was equally impressed with the duo. Never having seen them play together, he avoided going in “with any kind of predetermined agenda. This instinct was a fairly good one. Both gentlemen, being the seasoned musicians that they are, took very little time getting up and running and required very little direction/course correction. They were jovial, relaxed, free-flowing and took creative chances even while holding themselves to a high musical standard. I’m grateful they were open to whatever inputs and suggestions I provided on occasion.”

The album opens with Damion’s “Who’s Gonna Ride,” an anthem to the pandemic, George Floyd, and Black Lives Matter. “Seeing that,” he said, “but also personal experiences of seeing friends or myself in those kind of situations, and if something happened to me personally, would the whole world come out, ‘who’s going to ride, who’s going to ride with me.’ If I can’t speak for myself, who is going to ride? Who is going to tell my story? But also there was a Tupac song where he said that as well, who’s going to ride, so it’s a hip hop saying. If I got to go down there and if I got to march, who’s coming with me? It takes a community to make this change and it came out of that as well.”

Welcome to the Land isn’t all politics. In Cameron’s words, “After you get through getting your neck stepped on, you need a little love after that. If you’ve heard any of my music, 95 percent of it is involved with making love to some woman or trying to figure out what’s going on with a woman. And you could never go wrong with that concept and, you know, that’s kind of where I am, you know, I want to keep that Kimbrough vibe going. It’s really about wooing the woman, loving the woman and the blues—we all get blue. If you can’t relate to any other blues, you can relate to a woman leaving.”

Raw, by turns searing and romantic, this music will move you. It’s a perfect example of why Village Music set out to uncover music that needed a hearing.

Damion Kereem Pearson, aka ‘Yella P,’ is a multifaceted artist from Memphis creating a sound rooted in the Delta blues with shades of soul, gospel, and hip-hop. Mostly self-taught, Damion began playing harmonica at age 13, saving up his lunch money for a month to purchase the instrument. Adding to his arsenal, Damion later learned to play the guitar, saxophone, trombone, and piano. He got his start on Beale Street playing with ‘Big’ Jerry Parnell.

Cameron Kimbrough, the grandson of North Mississippi Hill Country Blues Legend Junior Kimbrough, and the son of blues drummer Kent Kimbrough, the Blues seems to be Cameron’s birthright. Over the years he taught himself to play the drums and the guitar while developing a rich vocal quality that touches the soul. His eclectic style is influenced by a diverse host of artists from the likes of John Lee Hooker to Linkin Park to Chris Brown. Cameron is the next generation of North Mississippi Hill Country Blues. His unique style of Blues has strong traditional characteristics of rawness and simplicity peppered with flavors of rock, neo-soul and R&B.