The Infinite Cool of the Legendary Dr. John 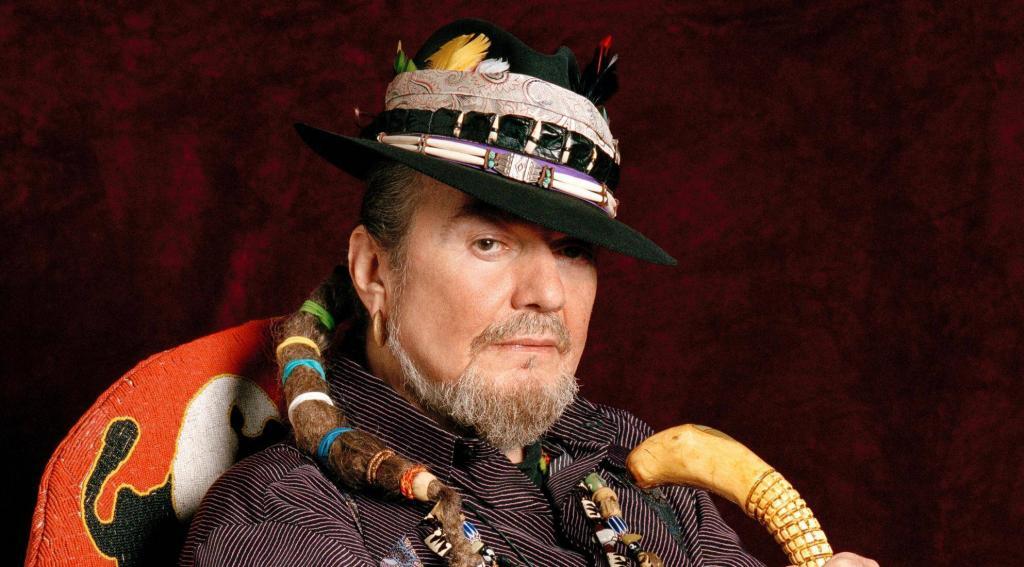 When musical legend Dr. John walks into a room, the air electrifies. Without effort, and in a low rasp not far above a whisper, the musical legend behind a thousand funky beats and decades of hits like “Right Place Wrong Time” commands attention. Mac Rebennack, his family name, is one suave, internationally celebrated New Orleans son of Funk, Jazz, Blues, and Rock.

The seventy-two year old piano icon, with a characteristic swagger, a chest full of beads (nearly every one meaning something special) and his outrageously classy wardrobe, brings the funk to any room he walks into. But it’s not strictly his charisma, cool and famed voodoo stage performance that the good doctor’s known for; it’s his ability to make music that has remained fresh, fun, and most importantly, funky for over four decades.

To call Dr. John “living history” would be doing something of a disservice to the masterful musician. One spin of his latest, Locked Down, proves that the ever-vigilant piano master has never been more in touch with defining what popular music should sound like.

Under his always-present, timeless hats is a walking encyclopedia; a sponge of knowledge and prowess about blues, jazz, New Orleans music, and dozens of genres, styles, and performers. Why has he managed to capture what so few performers in the world have accomplished: a consistently unique, constantly endearing, never-ending cool sound and personality?

“Comin’ up I listened to everything my pa had. He had a record shop,” he says, relaxing at a wide oak table high above the Big Muddy Blues Festival in an ancient part of Saint Louis. In less than an hour, he’ll headline the show, playing to thousands of packed and screaming fans with what has to be one of the best bands on the road. “My pa had four kinds of records he sold, which was race records like Rhythm & Blues and blues, jazz… it was bebop, traditional jazz, and afro-cuban music, and spirituals like hymns and stuff like that, and it was hillbilly music.”

“Most of that hillybilly music was Hank Williams or somethin’ like that. So that’s kind of what I grew up hearin'”

A literal lifetime of experiences in and around the music, as well as coming up in the gritty underbelly of New Orleans, has continued to shape one of the crescent city’s most famous residents. But he never just listened; He lived it, absorbed it, learning from and sharing music with the people he calls “the best there was”. With a stable of names he’s worked with including Cher, Gregg Allman, James Booker, Muddy Waters, Gatemouth Brown, Eric Clapton, Mick Jagger, and nearly every other who’s who of popular musicians throughout the years, “the best there was” is an understatement.

Looking back at those that had influenced him, Dr John had no shortage of incredible stories. “I seen Muddy Waters playing The Last Waltz [Martin Scorsese’s rock concert masterpiece]. He played Nine Below Zero the night before they filmed it. I saw every so-called badass guitar player with his jaw droopin’ and saggin’… I wish they’d filmed that.” he boasts. “And that’s the kind of things I been blessed to see.”

“I remember Gatemouth. I never forget. I said to Gate, ‘I play your song Okie Dokey Stomp for my Theme Song!’ and he says… ‘Don’t fuck it up, kid’. I quit playin’ it as a theme song after hearing you say that! So that’s how much I admire Gate.”

“James Booker was on the road with me for five years.” Booker, also a New Orleans native, was one of the most gifted pianists of the 20th century — but a tortured soul who struggled with lifelong addictions. “There was so many guys quit the band over Booker. And in some way, I didn’t care. I loved the way Booker played… And it’s my band! All them guys all kept me in different ways. Just like Professor Longhair did in New Orleans, Huey Smith helped me in New Orleans, Earl King helped me on the guitar. There was so many guys around.”

How does an artist who gains popularity in the 70s maintain a career that spans decades? “I ain’t tryin’ to be mister predicable.” he sternly laments in a richly southern accent. True to that statement, he collaborated with The Black Keys’ Dan Auerbach to produce and play on his latest album, Locked Down. The album, a stunning, highly celebrated set of rock and afro-beat richness, took home a Grammy. “If someone ever say they expect me to do something… they probably gon’ be wrong. Cuz I’ma roll how I roll.” And wrong they were. Nobody was expecting the explosive direction of Locked Down. Rebennack growls across tracks that pan the CIA and the KKK with equal disdain, boasts about being a big shot, seethes on the subject of death and poverty, and praises God for saving his soul — and he does it all across ten electrifying tracks with Auerbach on screaming guitar, eerie drumbeats, and, of course, his endlessly cool piano prowess.

For all of his years playing the music industry, popularity and seasoning doesn’t make it any less difficult. “Hey, there ain’t no easy maneuvers out there. Of course there’s guys that’s still payin’ dues… I’m still payin’ dues,” he proclaims, with a faint hint of pride and the under-the-surface melancholy of years of road life, “and I’m supposed to be some sucker that’s like, ‘oh I figured something’ out. Well what I’m tryin’ to figure out is to don’t get beat as much as I used to!” His unbridled, constantly unique language can’t help but keep you hanging on his every word, his humor masks the fact that you’re sharing company with a five-time Grammy winner and Rock n Roll Hall of Fame inductee, and one of the most inventive musicians of our time. “And I’m tryin’ to shift that gear some more,” he quips.

If it could be boiled down to it’s most basic elements, though, Dr. John says with pinpoint accuracy what making music is about. “Dancin’. Dancing is a very big part of all of what we do. If you don’t make people dance… what the fuck you doin’ playin’ music?”

And in the future, if he plans to keep rolling with the style he did on Locked Down, he minces no words with a stare and a two second pause that means, ‘listen the hell up, son’ before he commands the conversation; “I ain’t tryin’ to be mister predictable. I ain’t tryin’ to be anything-able. I just wanna make music. And I want to make music to the best of my abilities.”