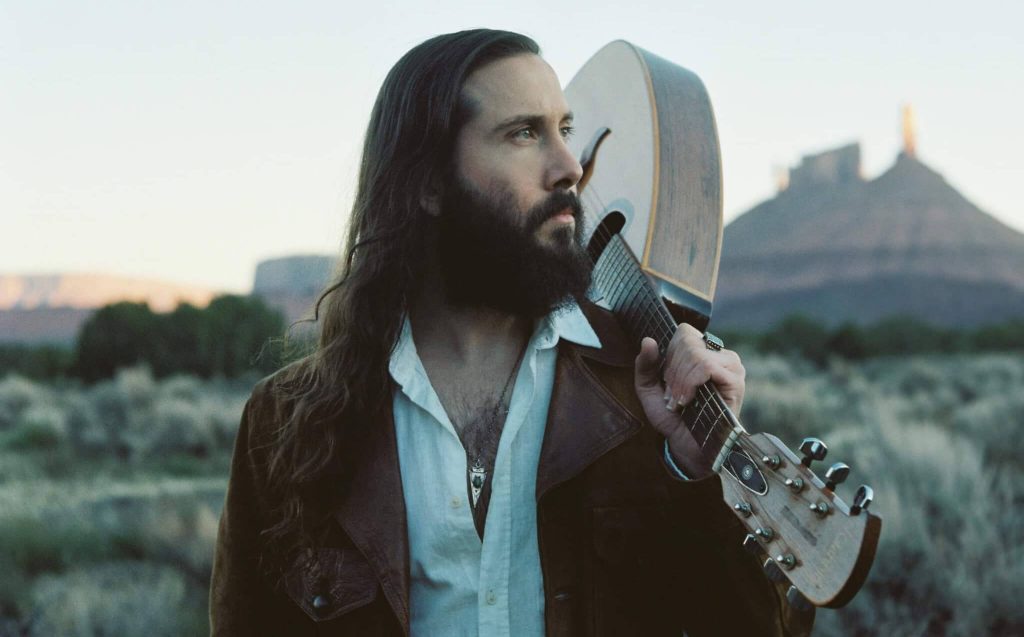 Deepening a musical evolution that began with 2020’s I’ll Get By EP and carried through last year’s single, “Song For the Thankful,” Floating On A Dream, (Fantasy Records) the debut full-length solo album from Avi Kaplan, further broadens his artistry into enthralling new territory. Rendered in long shadows and moody high relief, Floating On A Dream reflects Kaplan’s Californian roots and his fascination with the American West.

With country, blues, soul, tribal drums, and a touch of gospel underpinning his elemental acoustic driven rock, he explores matters of the heart, truth, morality, and the search for relevance across the album’s 11 original tracks. At the core though, there is that voice. From a haunting falsetto to its deepest bass tones, Kaplan’s instrument is unlike anything else in modern music.

Recorded at Sunset Sound Studios in Hollywood, CA., Floating On A Dream was produced by GRAMMY Award-winner Shooter Jennings (Brandi Carlile, Tanya Tucker, American Aquarium) and mixed by Trina Shoemaker (Brandi Carlile, Queens Of The Stone Age, Sheryl Crow.) While a few of these songs were written shortly after Kaplan’s departure from Pentatonix in 2017; others were crafted specifically for this project. What ties them all together is the richness and fluidity of his vocal range, which may surprise even longtime fans.

Incredibly, every harmony voice you hear on the album (except one!) belongs to Kaplan. Throughout the LP’s soaring choruses and deep valley passages, Jennings’ steadfast musical foundation helps keep that amazing voice firmly in place at center stage. His influence can be heard in the wide-open production using piano, pedal steel, varied flourishing guitars, and reverbed-out layered harmonies, which all contribute to the album’s spacious western scope.

In this album I’m leaning more toward the ‘70s and that old school cinematic western vibe. I am very excited to show people the palette of tones I like to work with when I paint these songs.

While hanging out at Kaplan’s home near Nashville in the fall of 2020, Jennings floated the idea of working together at Sunset Sound, where Crosby, Stills & Nash and countless other legends have recorded. Not long afterwards, Kaplan would indeed absorb the room’s deep history. Jennings describes the result as Ennio Morricone meets Bill Withers, a cross between cinematic and soulful.

“Not only is he an amazing singer, clearly, but the thing that struck me first and foremost is what a gentleman Avi is,” Jennings recalls. “We both collect music and we’re inspired by it. I always know it’s going to be a good process in the studio when I’m working with somebody who really loves music, but also really adores the music that has come before.”

Pleased with the warm vintage textures captured during the West Coast sessions, Kaplan returned to Nashville, where he now resides, to layer the vocals. “I wanted to take my time and I didn’t want to tune anything,” he says. “That’s something that was really important to me, achieving the sound of those ‘70s harmonies. With a lot of those artists from that era, it was all in the upper register. For this album, I wanted to have the upper register vocals in a way that people are used to hearing them, but also supplement the lower register and some of the lower frequencies with things that I could do with my voice.”

Kaplan grew up in Visalia, California, and knew as a junior in high school that he wanted to pursue a musical path. His family encouraged the decision, even though a performing career would often keep them separated. He drew upon their enduring bond to compose one of the album’s most emotional songs, “On My Way.”

“I spend a lot of time touring away from my family and then I moved to Tennessee. I find myself missing them a lot,” he says. “Each one of the verses of that song is a letter to a person in my family. I have a brother, a sister, and a mother and father, and I wrote a specific verse for each one of them. It’s not always the songs dearest to your heart that the world gets to hear, but when that does happen, it’s a beautiful thing.”

For the project, Jennings brought in notable L.A. session musicians such as guitarist Chris Masterson, while Kaplan arrived from Nashville with trusted writing partner and keyboard player Daniel Ellsworth. Over multiple weeks at Sunset Sound, the ensemble created a sonic balance that they termed “space coyote,” even joking that they should start a new band with that name.

“We had these vast musical landscapes that we were building, with lots of beauty and a Western kind of mystery to them,” Jennings says. “Daniel’s playing style reminds me of old school R&B, which felt like the perfect offset to go along with that kind of landscape, and especially with that soul in Avi’s voice. It’s like he’s got an orchestra in his throat, and you have to almost treat recording his vocals like you would treat an orchestra.”

The only other voice you hear on Floating on a Dream belongs to Joy Williams, his duet partner on “All Is Well,” a song she and Kaplan wrote together. “I love how our voices sound together on the choruses,” he says. “It’s a dream come true to harmonize with her. She’s also such a beautiful person, so kind and thoughtful. That shines through in her voice. I want people to hear this song because it’s about hope. That’s important these days, to acknowledge darkness but focus on hope.”

Perhaps the most anthemic cut on the album, “I’m Only Getting Started” roars to life with Kaplan’s resonant and fiery performance. “My journey has taken many twists and turns. It’s been a battle at times, but the completion of this album is a huge step towards the things I hope to achieve as an artist. I’ve been waiting a long time for this chance to give people my music, and to give people myself through my music,” Kaplan says. “It’s time to make that dream that I’m floating on, a reality.”