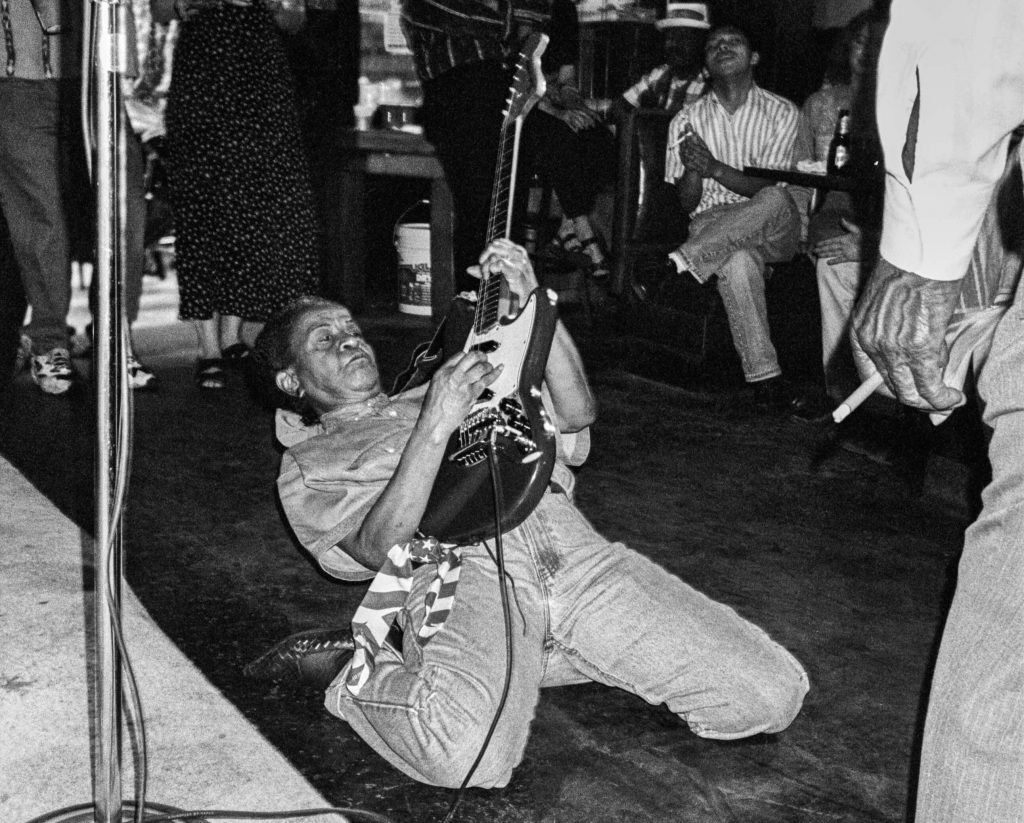 In the 1990s, Music Maker Foundation co-founder Tim Duffy wandered into Underground Atlanta and was amazed by an outlandish guitarist with chops to back her showmanship, busking for tips. Passersby could not have known that this guitarist, the late Beverly “Guitar” Watkins, had played with James Brown, B.B. King, and Ray Charles. The Beatles covered Dr. Feelgood & The Interns recording of “Mr. Moonlight,” on the original version of which she played guitar.

She quickly joined Music Maker, releasing her debut solo album Back In Business at the age of 60. She earned a W.C. Handy Blues Music Award nomination, opening a 42-date tour for Taj Mahal, and later performing at Lincoln Center. This week, Music Maker Foundation will release Watkins’ first concert album, In Paris. The New York Times noted that she captivated crowds by “playing her electric guitar on her back and behind her head, sliding across the stage. When she sang, it was often with a growl.”

The recording, made to a rapturous crowd in 2012, also features Albert White (Elvin Bishop, Clarence Carter, Ben E. King, Ray Charles, Joe Tex) on guitar, Eddie Tigner (leader of the Ink Spots) on organ and piano, and Lil Joe Burton (Tex, Bobby Womack, Otis Clay, B.B. King) on trombone. She pays tribute to Ray Charles with a rendition of “What’d I Say.” Watkins even plays harmonica on one track. Born in 1939, she nicknamed her guitars Sugar Baby and Red Mama, a moniker now borrowed by a deeply-felt slow blues song on the album.

“This lady is a flat-out musician who can duke it out onstage with the best there is — man, woman, or child prodigy.” Mahal said. “I’m still feeling the effects, and have some great memories of touring the country and playing onstage with her.”

Everywhere she played, from Atlanta taverns to Lincoln Center, Beverly “Guitar” Watkins was beloved, but in few places was she more treasured than in France. Listening back a decade later, one can imagine Watkins slinging her guitar behind her head and giving an all-out, wild, sweaty performance to an admiring crowd.