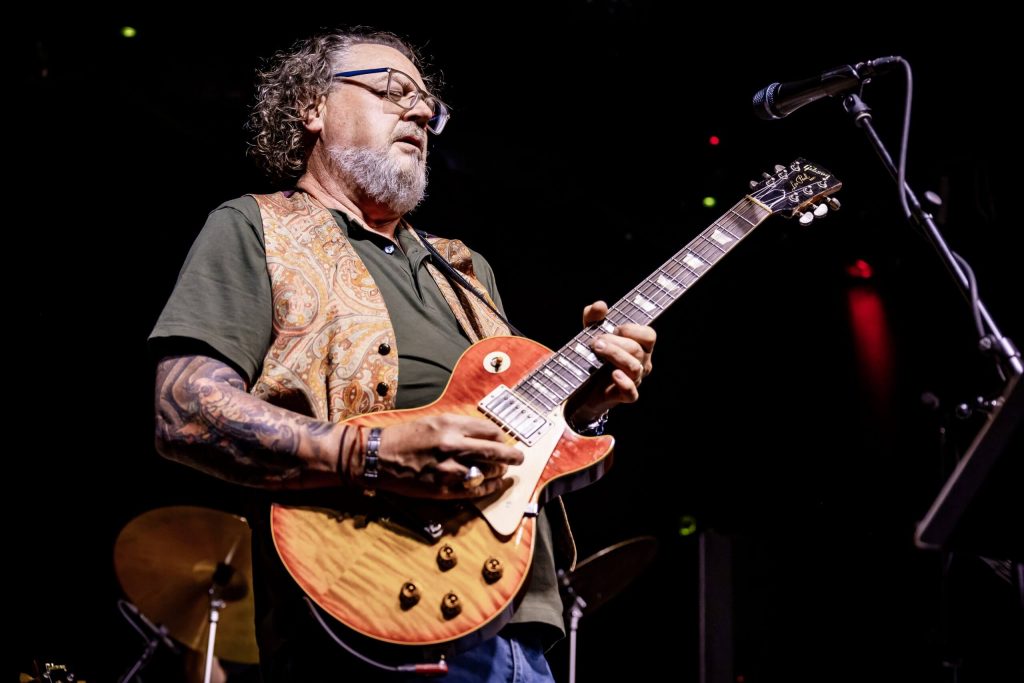 Horton Records announces the signing of acclaimed roots music guitarist/singer Brad Absher and his band, the Superials, and will release their label debut album, Tulsa Tea, on June 10.

Absher sounds like the places he’s been. In his warm, Southern soul music, you can hear Tulsa’s earthy dignity and the swampy carpe diem of Lake Charles. Thundering sax with plenty of swing calls up New Orleans, while gritty grooves nod to Houston, and more subdued moments of empathy hint at time spent much farther away. Like two old friends telling us a story, Absher and his electric guitar trade lines with lived-in familiarity that invites the rest of us to listen––and dance.

“That’s where I feel most me––when I’m up on stage with a guitar,” Absher says. He’s home in Tulsa, reflecting on the path he’s taken to his new album, the eighth album of Absher’s career. It’s also his first with producer Chris Combs, a virtuosic jazz musician with a knack for pulling the best out of Tulsa’s well-documented embarrassment of artistic riches. The pair decided to record live at Paradise Studio, which Leon Russell built at Grand Lake in the ‘70s. JJ Cale, Bob Dylan, Bob Seger, Freddie King, Phoebe Snow, and of course, Russell himself––plus so many more––recorded there.

It just looks like a big metal building you’d find on a farm, but then, you walk inside, and it’s like, ‘Bam!’ It’s a huge room, which I wanted. The way I like to make records––it’s hard to find studios where you can do it anymore. I’m old school. Everybody’s got to be playing at once.

For Absher, the result is a triumphant eight-song collection that knows when to roar, when to roll–and when to breathe. He wrote all but one of the tracks (the lone cover by New Orleans hometown heroes, The Iguanas), taking his time, penning songs the only way he can: piece by piece. “I get little bits all the time–a line here, a line there,” Absher admits. “It’s like I’m at the store, gathering ingredients. You have to live a certain amount of life to have enough to put out there.”

Absher has definitely lived. Born in Tulsa to two school teachers, he began moving around the country when his dad decided to try work in oil instead of the classroom. His father’s job ultimately took the family across the world to Iran, and Absher’s mother, determined to join him even though she’d never been on an airplane, took her young toddler and boarded. The Abshers spent three years in Tehran.

In 1969, the family returned to the States––to Lake Charles, Louisiana, where Absher began kindergarten and stayed until the family moved back to a town just outside of Tulsa in time for him to start high school. Then one day, while spending time at his grandparents’ house, he made a discovery that changed his life. “I found an electric guitar under one of the beds. I can still remember the smell of it,” he says. “I didn’t have any brothers or sisters. I was bored––boredom was my enemy. So when I saw that thing, I thought, ‘Okay. I got to find out about this.’”

Witnessing Elvis Presley and then BB King concerts sealed the deal. When Absher’s mom bought him a Silvertone, there was no turning back. “I never felt by myself after I got that guitar––and I used to feel by myself a lot,” Absher says. “I didn’t like that feeling. But my guitar was just like a playmate.”

When Absher started playing in clubs after high school, he joined other bands in Tulsa. He loved being part of a team, but his singing voice demanded a spotlight: Honeyed but sometimes gut-wrenchingly haggard like only a soul shouter’s croon can be, Absher’s vocals coupled with his tasteful electric playing made him a favorite front man in the vibrant Tulsa music scene throughout the ‘80s and’ 90s. A move to Houston turned into a 15-year detour––and the conquering of another regional circuit. In 2013 and again in 2014, Absher was the city’s International Blues Challenge Regional Winner. He went on to represent Houston at the prestigious IBCs in Memphis, where he competed against hundreds of bands from across the globe. Absher and his then-band Swamp Royale were finalists that year, making their Houston fans proud and opening up a new fan base that spread beyond the Gulf Coast.

Today, back in Tulsa, Absher is reconnecting to his roots––and discovering just how much of an impact he made there two decades ago. Young musicians now swap stories about sneaking into Brad Absher shows. “It’s wild, hearing that––being the old guy now,” Absher says with a laugh. “I like it.”

Tulsa Tea is the work of a budding elder statesman with compelling––sometimes urgent––things to say. Album opener “Be the Love” is tender encouragement with B3 and horns. “Man, I’d hate to be a kid right now––there’s so much pain, and everybody hates everybody else,” Absher says. “I tried to write this one like I was talking to a child.”

“Neutral Ground” is a boozy, big-hearted plea for loving compromise, definitively set in New Orleans. Committed partners trying to hash it out is a thread woven throughout the record. A chorus of saxophones kicks off Absher’s version of the Iguanas’ “So Tired,” a moody back-and-forth that captures the longing and sheer exhaustion of lovers trying to give each other what they need, while “Turn It Up” is a sultry celebration featuring sublime guest vocals from Tulsa powerhouse Briana Wright.

A magnetic waltz that shifts up into a shuffle like an excitable narrator pleading his case, “As Hard As I Can” is a confession and a declaration. Absher points to the track as his favorite on the album. “That’s as good a song as I can write,” he says. “The chord progression, the band, I love it all.”

The world’s current unrest finds its way onto the record, too. Buzzing guitar introduces “Hard Times,” in which Absher takes aim at the new chaos of different facts. “Hard times for the truth,” he growls with distorted incredulity over a crying B3. “Should Be Praying” questions anger and hatred through wailing electric guitar that gives way to a rallying cry: “They got their fist clenched when they should be praying.”

Heartbreaking “Goodbye for Now” is an album standout. Absher wrote the song about his only child, Madison, who died in 2016 at just 24-years-old. “It needed to be done,” Absher says of writing the song. “I did the best I could. I don’t know––I just want her to be proud. It still hurts every day.” The song is stunning: A message of hope and pain, wrapped up in a promise to his daughter.

Absher is easy to believe. In his tightly crafted songs, there is balance that only comes from honesty: Weariness and wonder. Sadness and mischief. “My heart’s on my sleeve––there aren’t a bunch of hidden meanings or anything,” he says. “I always somehow felt that’s what I wanted to do like the blues guys: If I could just play what comes out––yeah. I thought I’d be better off doing that.”

Brad Absher and the Superials will celebrate the release of Tulsa Tea with a special show and crawfish boil at the legendary Cain’s Ballroom in Tulsa on June 10 at 7:00 PM. Billed as the NEUTRAL GROUND THROWDOWN, the show will also feature special guests Poppa Foster and the Grits and Little Joe McLerran. For more information and advance ticket purchase, visit HERE.

Brad Absher and the Superials