There are lots of music cruises, but hearing live blues on a train - that's something special 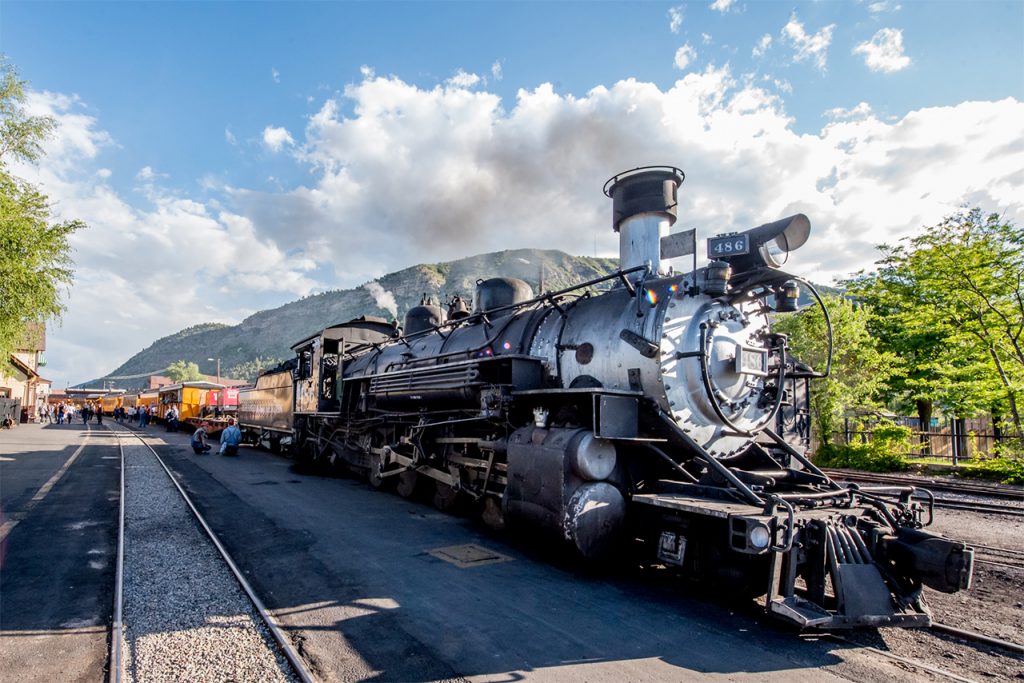 The onset of summer in the mountain town of Durango, Colorado inches a bit closer with the announcement of the artist lineup for the Durango Blues Train on August 26 & 27. The Durango Blues Train is excited to kick off its 10th year rockin’ and rollin’ aboard the the historic Durango Silverton Narrow Gauge Railroad with Kent Burnside, The Sugar Thieves, Héctor Anchondo, Jacob T. Skeen, Kirk James, and One Roof Blues.

Each artist performs in their own vintage coach, while passengers are free to dance their way from coach to coach and delight in a variety of musical performances. Four coaches have seats while two are open with no seats to entice and encourage dancing. Enjoy the blues, award-winning craft beer, wine and the beautiful scenery of the famous train featured in the Hollywood production, Butch Cassidy and the Sundance Kid.

To cap it all off, passengers will experience breathtaking sunset views along the “Highline,” a world famous section of the railroad, as the train crawls along craggy cliffs 400 feet high above the Wild Animas River.

You don’t have to be a blues fan to enjoy yourself, the train itself is an amazing experience. It’s been in continuous operation for over 130 years, carrying passengers behind vintage steam locomotives and rolling stock indigenous to the line. However, blues fans can enjoy two magical nights of blues on this historical railroad.

Tickets for the Durango Blues Train on August 26 & 27 go on sale today, March 31, 2022 at 10 am (Mountain Time). Tickets are $139 per person per night, plus a Historic Train Preservation fee. Tickets are limited and will sell out in advance. Purchasers must be 21 years old to participate. Tickets will be available online here.

Refreshments will be available for purchase on board. Guests can enjoy light snacks, bars with wine and craft beer from award-winning regional brewery partners Telluride Brewing Company and Ska Brewing.

Kent Burnside was born into the blues. He grew up in the North Mississippi Hill Country and is the eldest grandson of blues legend R.L. Burnside. As a boy, Kent worked in the fields surrounding Holly Springs, Potts Camp and Chulahoma. He sold sandwiches to folks who gathered at the family farm to hear his grandfather play the blues. When Kent was nine, R.L. gave him his first guitar lesson. Today, Kent Burnside travels the world to continue his family’s important musical legacy and build his own. Kent’s powerful, raw, deeply soulful performances are at once hypnotic, dark, hopeful, engaging and danceable. Kent wants every person to leave his show with a smile on their face and real Mississippi Blues in their heart.

The Sugar Thieves have been winning fans over world wide with their high energy, soulful live shows since 2006. Over the years they have honed their brand of American roots music, creating a sound that is all their own. Moving between blues, country, folk, gospel, rock and roll, and elements of jazz, freely they honor the tradition that makes American music so great. The Sugar Thieves call Phoenix Arizona home, but over the past eight years they have made their presence known all over the US, Mexico, and Europe. The Sugar Thieves have shared a bill with the likes of Taj Mahal, B.B. King, Willie Nelson, The Flaming Lips, The Blues Brothers, Robert Cray, and more. They’ve recorded and produced six albums, each containing a variety of original music, and old songs reinvented.

Growing up on a Missouri farm, Anchondo picked up guitar as a teen. He immediately began soaking up music: roots, Latino, bluegrass and old blues. After high school, he headed to Omaha, Nebraska to start his music career.

While other guys his age were going to college, getting married, buying homes, and building professional careers, Anchondo played guitar. Living on the road and taking jobs whenever necessary, Héctor put off marriage, put off having kids, and instead, he played guitar. And, it wasn’t long before his guitar playing became a thing of legend in the Omaha area, where he is based. However, as much as he was beloved by his thousands of fans in the Heartland, he remained largely unknown to the rest of the world. Until now.

After placing in the semi-finals in 2015, and the finals in 2016 at the International Blues Challenge in Memphis, TN, Anchondo is at long last taking his rightful place at the forefront of the contemporary blues world.

Following up his solid 2014 album Young Guns, Anchondo released the album Roll the Dice in 2017. It quickly leapt to the top of the blues charts and continues to get global radio play.

If you’ve never seen a one man band, you need to see Jacob T. Skeen, who not only serves up smoldering psychobilly all on his own, but pounds his drums and strums his guitar all dolled up in a suit. He plays ferociously, and has been relentlessly taking up stages around the Salt Lake valley, keeping up with his own fast guitar playing and steady kick-drumming, while a single cymbal shimmers in front of his jostling knees. He recently returned from an international tour to Italy including performing at the Festival di Invasione Monobanda vol 6 in Roma to promote the release of his first full length album Death, Thou Shalt Die. He has had the privilege of opening for artists such as Bob Log III, Bloodshot Bill, Freight Train Rabbit Killer, Reverend Beat-Man, Reverend Peyton’s Big Damn Band, Reverend Dead-Eye, and performed at the 2019 Deep Blues Festival in Clarksdale Mississippi.

Kirk James is solidly grounded in the Texas Blues tradition, playing Texas Shuffles, Ragtime and funky grooves. His unmistakable phrasing mixed with bottleneck slide conjures images of T-Bone Walker, Elmore James and Lightnin’ Hopkins. A blues performer for over 30 years, Kirk is known for his strong blues guitar style and distinctive vocals. James plays both original material and classics from the Blues Masters.

Solo or with the Kirk James Blues Band, Kirk can be found performing at Festivals, Concerts and small venues in Colorado and throughout the Four Corners Region.

What began as a husband and wife duo with Dave (guitar) and Taylor LaRocco (vocals), quickly expanded to include Randy Hayes (harmonica), rounding out the talented One Roof Blues trio. One Roof Blues’ homegrown sound blends the sultry tone of Taylor’s vocals seamlessly with Dave’s bottleneck slide guitar and the searing presence of Randy’s harmonica. Playing soul and blues-inspired originals and a variety of covers in venues across Southwestern Colorado, the group earned a spot in the Telluride Blues Challenge during the 2014 Brews and Blues Festival. They debuted on the Blues Train in 2014, returned in 2015, and 2020. Audience members young and old are advised to bring their dancing shoes.