Sarah's voice and guitar merge together in perfect harmony to create a timeless vibe respectful of Bert’s legacy. 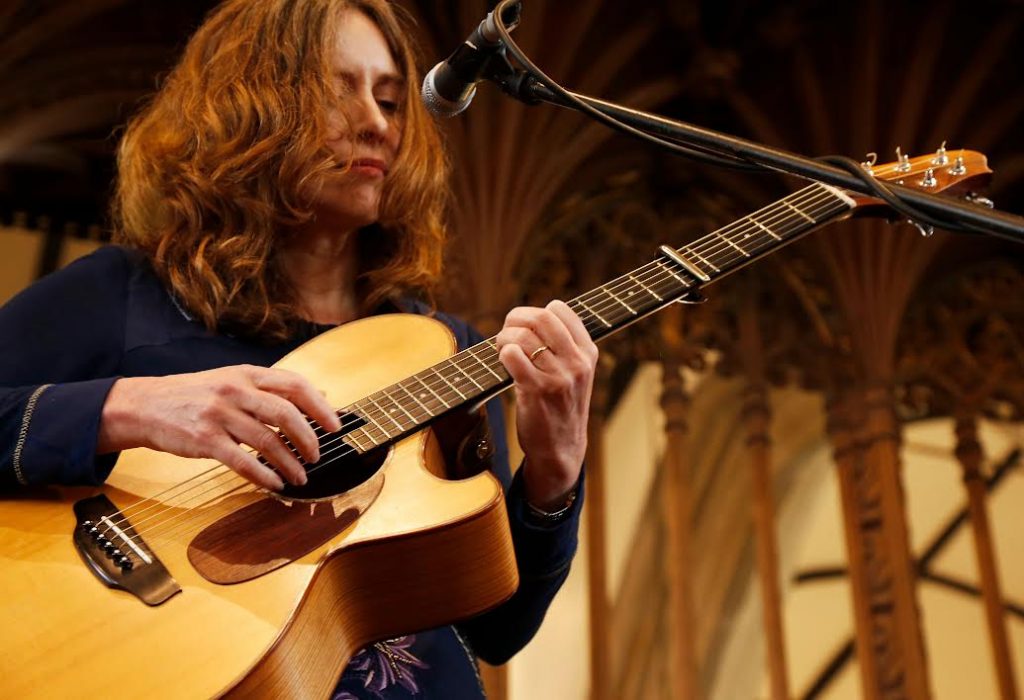 A new video has been released by The Bert Jansch Foundation as part of a project called Around The World In 80 Plays. In what would have been the legendary guitarist and singer-songwriter’s 75th year, the Foundation launched three special Yamaha LL TransAcoustic guitars to travel around the globe from guitarist to guitarist, each playing a song or tune inspired by Jansch. Sarah McQuaid, soaring high on the back of her latest highly acclaimed live album, The St Buryan Sessions, is included in this prestigious event. She is in good company, with fellow icons including Richard Thompson, Johnny Marr and Tommy Emmanuel.

Sarah explains: “I was tremendously honoured to be invited to take part. It was incredible just to handle an instrument that’s been played by so many guitarists I’ve worshipped from afar for so long, and to see their signatures on it and to sign my own name under theirs was almost surreal.”

Sarah’s contribution, “When a Man’s in Love,” is a tune she recorded on her first solo album 25 years ago, When Two Lovers Meet.

“I heard the wonderful Dundalk singer Seán Corcoran doing this song a good few years ago and was struck by its sensuous lyrics. It belongs to a genre known as “night visiting” songs and probably dates from the mid-19th century. I love the wide-open, lonely sound of the wooden and steel guitars together. I was heavily influenced by Bert’s interpretation of “Blackwaterside’ and on the video interview I play a bit of that song’s signature guitar riff.”

Sarah’s intricate finger picking strings are a precursor to her exquisite a capella vocal delivery; voice and guitar then merge together in perfect harmony to create a timeless vibe respectful of Bert’s legacy. The lyrics resonate inside the entire building and echo back from the rafters. This is a perfect song for Sarah because it showcases her outstanding vocal versatility and power, from rich soul-drenched gravitas to the beatific. Sarah retains the integrity of Bert’s approach of playing with counter melodies and counter rhythms to the vocal melody so that the guitar and voice achieve equal status.

The distinctive guitar tones are a characteristic of Sarah’s style: since discovering DADGAD via Jansch, she has played in this tuning throughout her career and published The Irish DADGAD Guitar Book. Guitar enthusiasts will be particularly interested in this alternative tuning which is often associated with Celtic music.

The song was recorded in the majestic surroundings of St Buryan Church in rural Cornwall, England, the spiritual birthplace of Sarah’s recent album and her most accomplished and inspiration musical work to date. At the pinnacle of her career, Sarah has created here another magnum opus to match The St Buryan Sessions, a ‘best album’ of 2021 across three continents.

See who is taking the guitar on the next stage of its journey here.

Sarah McQuaid is preparing for her next tour of the UK and Ireland later this month including a performance at the prestigious Cathedral Quarter Arts Festival in Belfast. Her tour information can be found here.

Sarah’s own custom-made Andy Manson acoustic guitar will be accompanying her on tour, along with her Korg SV-2 stage piano, vintage Premier Olympic floor tom drum, and the Ibanez Artist electric guitar originally loaned to her by another guitar legend, the late Michael Chapman, when he produced her 2018 album If We Dig Any Deeper It Could Get Dangerous.

Videos of all 15 tracks on The St Buryan Sessions album, filmed by Cornish filmmaker Mawgan Lewis and second cameraman John Crook as it was being recorded live, plus a 59-second promo for the tour and a 9-minute documentary about the making of the album, are now on Sarah’s YouTube channel.