Video Premiere: Jason Ringenberg Walks Through a ‘Nashville Without Rhinestones’

“The rampant greed for growth has crossed a line over the past ten years. I had to write this song.” From his gem of an album ‘Rhinestoned,’ we are proud to premiere the official video for “Nashville Without Rhinestones.” 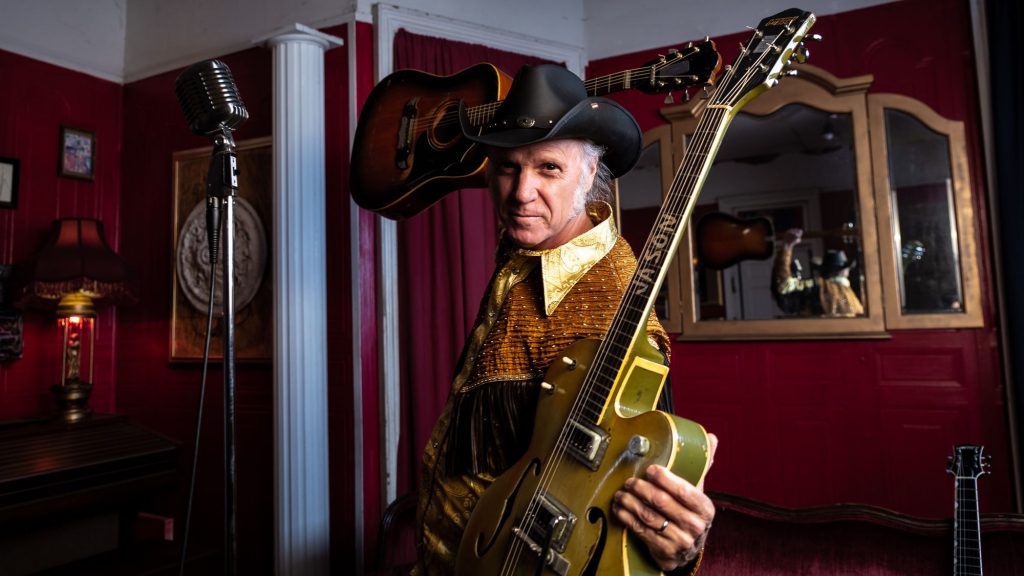 Emmy-Award Winning and Americana Music Association Lifetime Achievement Recipient Jason Ringenberg takes to Nashville’s Lower Broadway in his latest video for “Nashville Without Rhinestones.” Beginning with the cowpunk icon genuflecting before the Mother Church of Country Music, AKA The Ryman Auditorium, he then makes his way through the streets and notices staples like Tootsies and Robert’s Western World still standing tall. But like walking through the ruins of a fallen empire, shameless tourist traps such as packed party buses and pedal taverns are all too present.

The video also sees him walking through one of the remaining vestiges of Old Nashville. With its neon guitar and rotating sign, Ernest Tubb’s Record Shop shines like a beacon to Music City locals and loyal visitors alike. Cadillacs and sweet Tele® twangs will be forgotten in a Nashville without rhinestones; and sadly, there will be no Ernest Tubb’s Record Shop in a Nashville without rhinestones. Since the filming of this video, the beloved institution that was also home to the Midnite Jamboree is set to shutter by spring.

From his gem of an album, last year’s Rhinestoned, we are proud to premiere the video for “Nashville Without Rhinestones.” In his clear tenor voice, Ringenberg sings, “Nashville without rhinestones / No, not a single one / They will all be traded in for camouflage and guns,” while using satire to stay sane.

He explains, “For over four decades, I have resisted the ‘law’ in country-rock to record an anti-Nashville song. This city has been very good to me. I have always loved it. However, the rampant greed for growth has crossed a line over the past ten years. I had to write this song. The video is a tribute to old Nashville and what is being lost to greed and development.”

“There are performers who obey the rules and force their muse into specific genres of music, touch a common nerve and sell millions of records,” ABS’s Don Wilcock said in an interview feature. “Then, there are country outlaws who break the rules and appeal to those who secretly wish they could be outlaws just like their musical heroes. But there are a select few who refuse to acknowledge there are rules at all. These artists are truly free. They spend their lives creating music that plays their soul like a harp from heaven, and if that connects to a select number of fans, they’re truly at home in their spirit. Jason Ringenberg is one of those musicians.”

Ringenberg has performed at Americana Music Festival, Jason Isbell’s Shoalsfest in Muscle Shoals, and a set at the EXIT/IN celebrating Billy Block’s Western Beat Show. But his most prized, personal, and professional moment came when he made his Grand Ole Opry debut some 40 years after he started shaking things up in Nashville with his band Jason & the Scorchers.