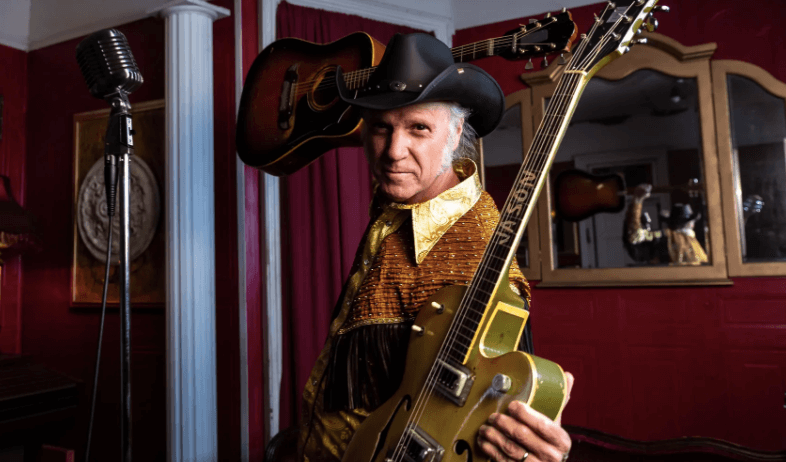 The Rhinetone Sparkle of Jason Ringenberg

'Rhinestoned' mixes originals about the Indian Chief Crazy Horse, 1960s civil rights freedom riders from Nashville, and “Nashville Without Rhinestones” that says a lot about who Jason Ringenberg is

Jason Ringenberg has released Rhinestoned, an album forged out of the pandemic, an incredibly eclectic collection of songs that range from straight ahead Nashville gems to an Easter hymn from the 19th century.

“Music is one of just four basic food groups,” he says with perfunctory self-assurance. “Keith Richards said the truth about music. I think music is one of the essences of life.” 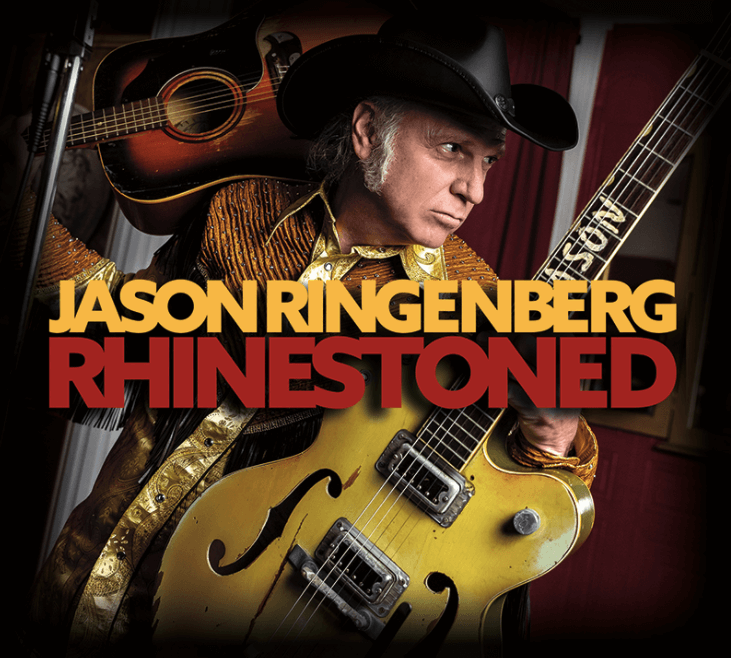 Jason is best known for his band Jason and The Scorchers who put a rockin’ bite into country in the 1980s before was fashionable and for his Farmer Jason persona whose children’s songs at the beginning of this century brought him his greatest commercial success.

He’s a lifer. Now, nearly a half century into his career, he’s recorded a defining album that probably wouldn’t have happened if not for the pandemic. Rhinestoned mixes originals about the Indian Chief Crazy Horse, 1960s civil rights freedom riders from Nashville, and “Nashville Without Rhinestones” that says a lot about who he is: “But out on the horizon I see a sinking ship with hillbilly ghosts on their final trip.”

Early in my interview I told Jason, “I love incredible people. I mean you’re an incredible person. You came out of a friggin’ hog farm and changed the way music was looked at. You helped set the stage for country music to be accepted by the same people who were listening to Bob Dylan and Neil Young. That’s no small accomplishment.”

Jason’s response, “If you make a difference in people’s lives, then you’re a success. That’s the only way you can look at it really like you did when you were in Vietnam putting out that newspaper in the mess hall. (I edited The Morning World News Roundup at Army Headquarters, Long Binh in 1969.) That’s going to stick with me for a long time.”

The die was cast when Jason went to see The Ramones perform in a dormitory basement at the University of Southern Illinois in the mid-70s. He was a history/music major at the college. He’d grown up listening to country music on his dad’s truck radio, and his older siblings turned him onto Dylan and Neil Young. At the time, he was playing in a bluegrass band called Gary, Jason and Chico.

“There wasn’t even a stage. I wouldn’t even call it a ballroom. It was really a basement. It was a college sponsored event.  Southern Illinois is like the corn belt. It’s Appalachian. Most of the kids were either from Chicago, or they were hillbillies from the hills of southern Illinois or northern Kentucky. So, punk rockers from southern Illinois if they came out of their enclaves would get beat up and harassed. All 300 of them in that region were there. There were spiked up hair, safety pins, leather jackets, dyed hair and all that stuff.

“And there I was! I had my straw hat on. I had cowboy boots, and I had a really good spot. I got there early enough, and I was right between Dee Dee and Joey. It was a mind-blowing experience for this kid from the hog farm. It was really incredible. And it was the first time I’d seen real rock and roll. It was stunning. They were so good that night. Really good.”

“Not a lot of people understood what I was thinking about. I mean I was doing it even before Jason and the Scorchers. I was doing that sort of revved up country thing, more psychobilly in the ’70s and ’80s. There was a lot of that, but by and large looking back, it was a very positive thing. It set me apart. There was nobody else in the scene I was in in those days doing what I was doing. There were other people around the world doing that, but in my circuit I was the only one. I used that to great advantage.”

Jason and The Scorchers were one of the more energized of the indie country/rock bands of the mid-80s who influenced today’s alternative country and Americana genres. They had hits with “Golden Ball and Chain” and a rock version of Bob Dylan’s “Absolutely Sweet Marie.” A 1982 EP Reckless Country Soul brought some success. Ferver in 1983 proved they were no fluke, but it was Lost and Found in 1985 that Jason now feels was their best album of the three, but it also led to the low point in his career.

“We were in Europe on a long tour, a long, long tour, weeks and weeks. And obviously Lost and Found, a brilliant record, a record we all thought was going to be multi-platinum and change the whole world wasn’t going to sell. It wasn’t going to work, and the band was falling apart on the tour that seemed to never end.”

It was the closest Jason ever came to going over the edge. “I get most of my genetics from my mom, and I think that kept me from doing what most musicians do, really something radical like a nervous breakdown or a suicide. Most end up doing drugs that do this. I was able to avoid that, thanks to good genes, I think.”

In the next 17 years Jason recorded both as a solo act and with the Scorchers, but it was his alter ego as a children’s musician Farmer Jason that would become his most successful career move. He recorded four albums and a DVD early this century. His PBS mini program “It’s a Farmer Jason” earned him four Emmy nominations and one Emmy win.

“When you’re in front of 500 little kids, and you’re there to entertain them, it’s spectacularly exciting. You can’t imagine how fun that is. It’s unpredictable. When you’re singing a regular show, you do the same show, and you can kind of lay back for a minute, go get a drink of water, tune your guitar, and come back and tell a story, but when you’re with kids and you get a drink of water, they might just walk away. They might quit thinking about this crazy farmer and go play with their doll; you know? You have to be there with them the entire time you’re on stage. That was so exciting to learn how to do that. I loved that. It was a great experience.”

Rhinestoned wasn’t even an idea in Jason’s head before the pandemic struck. “I’m not Mr. Prolific. I’m not Bruce Springsteen. For me to do a record every three or four years is about right. More than that is a rare case. So, I just did Stand Tall (in 2019), and that was a pretty big record for me actually. I did a lot of work on that, and that was an ambitious project. I didn’t expect to come back two years later with another release but, hey, all of a sudden like everybody else, you have all kinds of time on your hands, and I’m a recording artist with the time, so I record.”

Created in a Nashville basement studio once owned by1950s country superstar Jim Reeves, Rhinestoned was produced by multi-instrumentalist George Bradfute. He’d worked on most of the Jason and Farmer Jason records, but the two hadn’t done a full project together since 2012. This may have been recorded in a pandemic, but there’s no depression here. You can hear the history in his songs: Cowpunk, classic country, children’s music, and even a Methodist Church hymn with his daughters singing back-up all fitting into what is currently called Americana.

“We were affected personally by the pandemic. I think I would be too glib by saying the pandemic didn’t affect me a lot. The recording itself was the easiest part of the pandemic to deal with because I had recorded in that sort of one-on-one way with George before. I had the songs written before we went into the studio. As an independent artist with a low budget, I go into recording as ready as I can possibly be. But yeah, I was ready. Of course, I would see George sitting in there with a mask as we were recording, and we were like everyone else on planet earth.”

There is a lot of Farmer Jason in this recording. He sings younger than his 67 years. His enthusiasm is childlike, but his songs are more than vacuous hooks. I like his rock-infused energy here just as I always liked in The Scorchers. He covers the legacy country cut “The Storms Are On the Ocean” by The Carter Family, a traditional Easter hymn, “Christ The Lord Is Risen Today” from the 1800s, and rockabilly sendup of “Time Warp” By Ozark Mountain Daredevils. But its his originals that make this album sing.

“I Rode with Crazy Horse” came to Jason in a dream and is based an old Lakota/Oglala legend. “I’m a history nerd, and I mean that’s all I read. I’m always reading history, and I was a history minor. Everything about Crazy Horse is steeped in history and myth. It was such a fun song to write. I enjoyed every second of writing that song. It was very exciting to write that.”

“The Freedom Rides Weren’t Free” contains the line “For those who rode the buses, the freedom ride wasn’t free.” It’s about Nashville young people who rode the freedom bus rides in 1961 to call attention to racial inequality. “The kids got together in their dorm rooms, emptied their wallets, and were able to buy bus tickets to get on the buses to Alabama. Without any money or protection, a lot of kids from Nashville did that. So, when I read that story, I just couldn’t believe that they did that! They got on those buses knowing they were going to get beat up. The only question was when.”

There are performers who obey the rules and force their muse into specific genres of music, touch a common nerve and sell millions of records. Then, there are country outlaws who break the rules and appeal to those who secretly wish they could be outlaws just like their musical heroes. But there are a select few who refuse to acknowledge there are rules at all. These artists are truly free. They spend their lives creating music that plays their soul like a harp from heaven, and if that connects to a select number of fans, they’re truly at home in their spirit. Jason Ringenberg is one of those musicians.