The full single with B-side “One Stop Shop” featuring Chali2na will be released on vinyl on May 6, her New Orleans Jazz Fest show at Congo Square Stage! 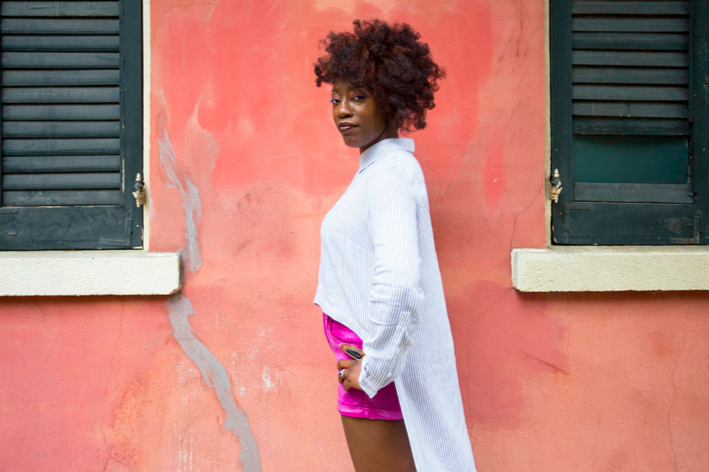 In her latest single “Let’s Get Down Tonight,” written before the pandemic, soul singer-songwriter Erica Falls sounds like the spirit of New Orleans music personified. A funky spirit. A free spirit. A spirit all sunshine. Certainly not a dimmed and disconcerted spirit. “The pandemic took my creativity and put a choke hold on it,” she confesses to me. “Survival took precedence, and it distracted me from my place of peace.” The song takes on more meaning now that she’s found herself back in that place. “I am, and it feels good.

Her angelic and soulful voice builds a bridge between neo-soul and a vintage soul era thought to be lost. And according to her, the apple doesn’t fall far from the tree. “My love for singing started in my home. My mother is a phenomenal vocalist and pianist but the church is definitely a part of my foundation and also where I heard some of the best there was… including my mother.”

Working with different artists has shaped how she expresses herself through her current music. Falls toured as a vocalist for celebrated Crescent City funk band Galactic before forging a new path with a solo career. She never placed a premium on the big-fish-small-pond concept, theorizing, “I thought my gift was more for the ocean.”

She has been a vocalist for such luminaries as Allen Toussaint, Irma Thomas, Jennifer Hudson, and Sting – and has recorded with the likes of John Fogerty and Dr. John. Allen, one of the most influential figures in New Orleans R&B, played an invaluable and instrumental role as a mentor figure who taught her that “writing is just a conversation that’s had with music.”

She enthuses, “Allen Toussaint was a genius, and it was always a learning moment being in his presence. How he operated was a class act. He knew how to get what he needed from you musically, but he would always ask you if you felt good about it. To him that was important because if you did, you would deliver better.” On her writing process, which varies, she explains, “It depends on what hits me first. Sometimes the melody comes with few words, so I fill in with sounds until the story comes. Other times I get the melody and lyrics at the same time. When it’s like that, it doesn’t let me go until I finish.”

For Falls, music is the great unifier. She’s at last bringing her sound back to her fans with a busy tour ahead including San Jose Jazz Fest and Michael Arnone’s Crawfish Fest, Estonia, the U.S. Virgin Islands, Tahiti and more. Falls will also be be performing at French Quarter Fest April 23rd, Baton Rouge Blues Fest April 24th, and Jazz & Heritage Fest May 6th.

“Let’s Get Down Tonight” via Louisiana Red Hot Records was written and performed by Erica Falls, and co-produced with Nick Mercadel who also played drums. The single features vocals by Japanese-American rapper Lyrics Born; Chris Adkins on guitar; Mike Bass on bass and trumpet; Jason Hodge, Sr. on keys; and Kendrick Marshall on B3. Mixed and Mastered by Bob “ Bassybob” Brockman.

After the dynamic verse from Lyrics Born, note Falls’ perfectly controlled and well-measured vocal delivery as her pitch steadily rises. Of the song, she shares further, “It’s lighthearted and fun, but since the pandemic the relevance remains the same —  but as more of a need to escape the crazy times we’re living in and to bring a little sunshine. You know, this song is about letting your hair down, living in the moment and enjoying life. Life is short, and it’s a blessing. Don’t take it for granted.”

The full single with B-side “One Stop Shop” featuring Chali2na will be released on vinyl on May 6, her New Orleans Jazz Fest show at Congo Square Stage.