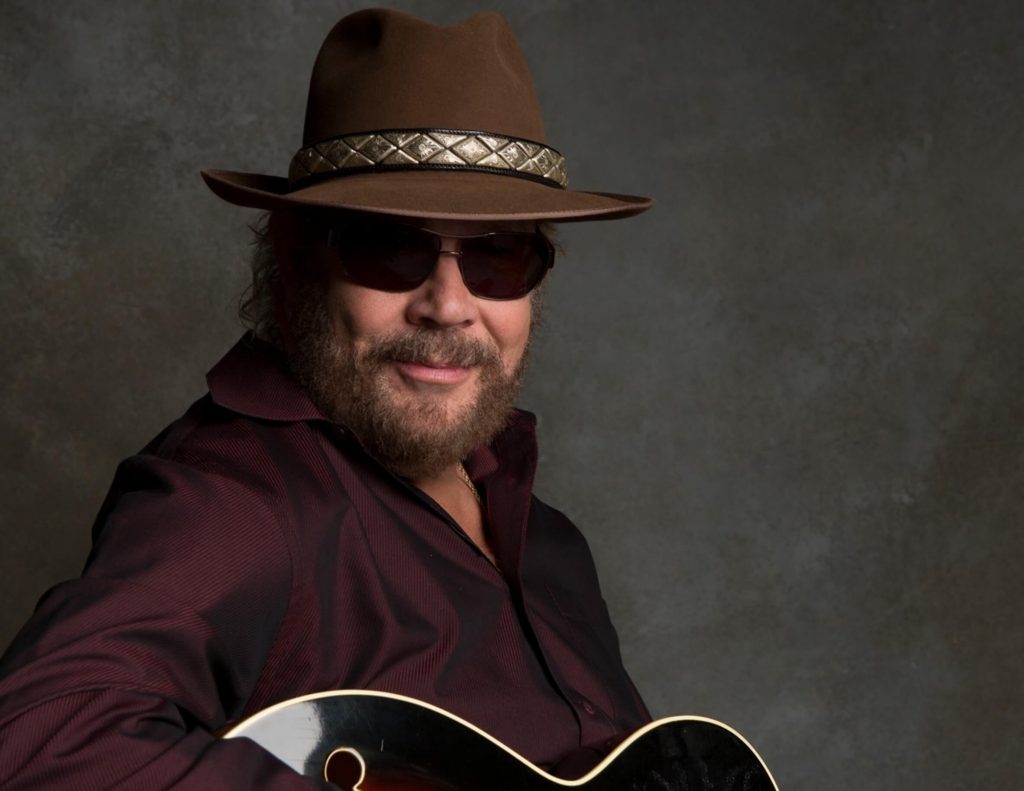 Larger than life, capable of summoning “all his rowdy friends” with a couple crashing downbeats and a blaring guitar riff, Hank Williams, Jr. has been one of country music’s truest outlaws for over half a century. But more than the swaggering singles, roughneck fantasy videos or relentless sense of blue-collar boogie, at his core, the 72-year-old legend is a bluesman. Pure, unqualified and unadulterated, the only son of Hank Williams has the same down low lonesome in his veins as the man Rufus “Tee-Tot” Payne taught to play guitar as a small child growing up in Greenville, Alabama.

With Rich White Honky Blues – set for release on June 17 – the second-generation Country Music Hall of Famer makes good on his legacy with a turpentine and rough wood take on the hill country blues that informed his father’s raw-boned style of putting his pain out there. GRAMMY-winning Producer of the Year Dan Auerbach recorded the set live, with a dozen songs reprising classics from Robert Johnson, Lightnin’ Hopkins, R.L. Burnside, Muddy Waters, Big Joe Turner and a few from Bocephus himself.

The blues is where it all comes from. It’s the start of everything musical in my family; everything starts with Tee-Tot and flows from there. I’ve always flirted with this stripped back blues – all the way back to the ‘80s. But I finally made an album that’s just that, and I like it.

Blame it on the owner of Easy Eye Sound. Auerbach went straight to the essence. Assembling a wicked core band of electric slide guitarist Kenny Brown, claimed as “my adopted son” by R.L. Burnside, bassist Eric Deaton, who first toured with Fat Possum’s Juke Joint Caravan, backing up T-Model Ford and Paul “Wine” Jones, plus drummer Kinney Kimbrough, son of North Mississippi blues legend Junior Kimbrough, they tapped into the lifeblood of the blues at its most randy.

“If you wanted to play this kind of music, you couldn’t have better players,” Auerbach explains. “The first time I ever saw Hank Jr. on TV, I was a kid raised on Robert Johnson and Hank Williams, Sr. records, and those things came through so clearly watching him. So, I tried to assemble the right parts to just sit in that piece of who he is.”

It started with a phone call, discussing what these sessions could be. Nothing definitive, no commitments made. But then Auerbach started receiving text messages the week leading up to the dates: pictures of Hank Williams, Jr. stationery, each with the title of a song he wanted to sing. Back and forth. Songs. Influences. Touchstones to draw upon.

And then it was Day One.

“First thing he said to me when he walked in was, ‘I don’t really feel like fucking with this shit!’,” Auerbach recalls. “And he walked into another room.”

Over the course of just three days, Rich White Honky Blues was done, with Williams punctually declaring “I hope you got all of that. I bet YOU did. I’m going to listen – and smoke…”

Williams’ extremely impressive resume has spawned 70 million albums sold worldwide, six PLATINUM albums, 20 GOLD albums, 13 No. 1 albums and 10 No. 1 singles. 2016’s It’s About Time (Nash Icon Records) included the history-making “Are You Ready for the Country,” as well as tunes “Dress Like an Icon,” “Just Call Me Hank,” “It’s About Time” and “The Party’s On” in addition to re-recorded versions of classics “Mental Revenge” and “Born to Boogie” with Brantley Gilbert, Justin Moore and Brad Paisley on guitar. Following It’s About Time, Williams has released several compilations, including All My Rowdy Friends Are Coming Over: Great Tailgating Songs, A Country Boy Can Survive (Box Set), Hank Jr. Sings Hank Sr. and 35 Biggest Hits. He continues to add accolades to an extremely impressive resume, which includes ACM Entertainer of the Year, CMA Entertainer of the Year and BMI Icon, in addition to a GRAMMY win and coveted inductions into the Nashville Songwriters Hall of Fame and Country Music Hall of Fame.

As Williams prepares for the release of his 57th studio album, his family has been struck by tragedy with the sudden passing of his wife of 31 years, Mary Jane Thomas. While Williams considered delaying the project’s announcement, time with his family led to one conclusion: music offers solace in the most difficult times.

In this sense, it seems almost predestined that Rich White Honky Blues ends with a prayer for redemption as Williams invites the Savior to bring whatever grace He might have, to sow solace and forgiveness, suggesting the larger than life amongst us transcend mortal limitations. After all, Country blues informed his father’s raw-boned style of putting his pain out there, epitomizing the unquestionable truth that there is always a time for music in moments of need.