This concert was essentially a showcase for the albums 'Wreckless Abandon' and 'External Combustion,' because Campbell & the Dirty Knobs were not able to tour in support of the earlier release due to the pandemic. 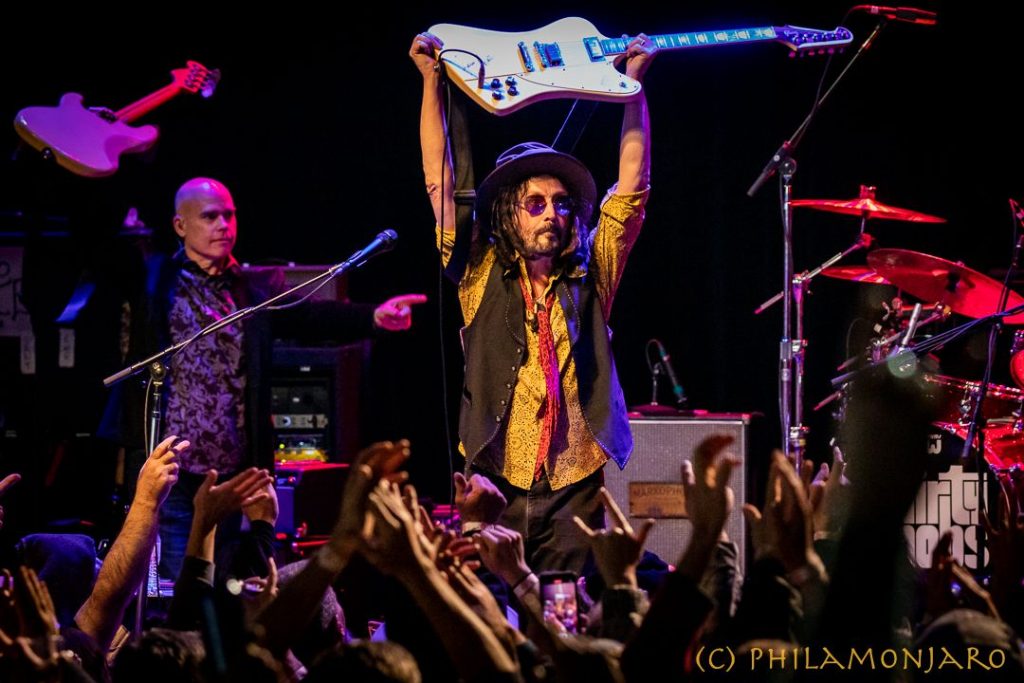 Mike Campbell & the Dirty Knobs played a long, loud, triumphant concert at the Park West in Chicago last Saturday night. I have been to a lot of shows at the Park West, one of Chicago’s premier smallish venues, but I do not recall seeing as long a line as there was to get in for this event. Maybe it was because this concert had been postponed more than once because of COVID-19, and people had been waiting a long time for this show to take place.

Campbell, of course, was a guitarist, cowriter, bandmate and compatriot for Tom Petty for 45 years, until the iconic rocker’s death in October of 2017.  Campbell played with the late legend in both Tom Petty & the Heartbreakers, and in Mudcrutch, their earlier band.

When the Dirty Knobs came out to play, Campbell referenced the delay in the concert taking place by saying “After two and a half long fucking years, we finally made it here” and “We’re gonna have some rock and roll healing tonight!”

Campbell was backed by his intense bandmates Jason Sinay on guitar, Lane Morrison on bass, and Matt Lang on drums and percussion. These are the same musicians who play on the Dirty Knobs’ two albums, Wreckless Abandon from November of 2020, and External Combustion, released earlier this month.

This concert was essentially a showcase for both of these albums, because Campbell & the Dirty Knobs were not able to tour in support of the earlier release due to the pandemic.  The band played nine songs from Wreckless Abandon and six songs from External Combustion.

Opening with “Wicked Mind,” the band later played “Pistol Packin’ Mama,” a song reminiscent of the Rolling Stones’ “Honky Tonk Women.” Before playing “Fuck That Guy,” Campbell explained that Chris Stapleton came up with the title but that Campbell wrote the song; apparently that was enough to give Stapleton a co-write. “Fuck That Guy” was a crowd favorite, with the audience shouting along with the title phrase.

The Dirty Knobs played two Tom Petty & the Heartbreakers songs that were written by Petty and Campbell, the deep cut “Can’t Stop the Sun” and another crowd sing-along “Refugee.”  Another audience favorite was an extended version of “Sugar,” which featured bassist Morrison. That was followed by the Tom Petty classic “Southern Accents,” the only Petty song played by the Dirty Knobs all night that Campbell did not have a hand in writing.  This was an especially poignant moment, given the fact that Campbell and Petty were about the same age, both were born and raised in northern Florida, and especially because Tom Petty rarely played the autobiographical “Southern Accents” live in concert.

The main set closed with the one-two punch of a pair of songs from Wreckless Abandon, “Loaded Gun” which segued into “Southern Boy.”

The Mike Campbell & the Dirty Knobs encore began with an extended version of the Tom Petty & the Heartbreakers song “You Got Lucky,” which contained snippets of Fleetwood Mac’s “Rhiannon,” the Ventures’ “Walk Don’t Run,” and the Beatles’ “Eleanor Rigby.”  The show closed with the Chuck Berry dusty “Little Queenie,” and another Petty standard “Runnin’ Down a Dream.”

The crowd left excited and happy after hearing over two hours of righteous rock and roll. This reviewer would have enjoyed hearing the gorgeous ballad “Anna Lee” from Wreckless Abandon, but it was not to be. Mike Campbell did sound a lot like Tom Petty on vocals, which is certainly understandable.

The opener on Saturday, Jeremy Ivey, accompanied himself on acoustic guitar. Ivey’s first song “Orphan Child” was about him growing up as a foster child, and is from his recently released third solo album Invisible Pictures. Maybe most well known as being the guitarist in her band and husband to Margo Price, Ivey was playing his second to last show with Mike Campbell and company before leaving the tour.

Ivey’s set featured interesting lyrics and enjoyable music, although the crowd failed to give Ivey the respect that he deserved, because most people did not pay attention to his music or talked rather than listened.

If you were not able to see this Dirty Knobs show, they are the opening act on July 23rd at Wrigley Field for Chris Stapleton, The Highwomen and Mavis Staples. Get to that show early!