Check out the video for "Watina" ft. Carlos Santana and the Garifuna Collective 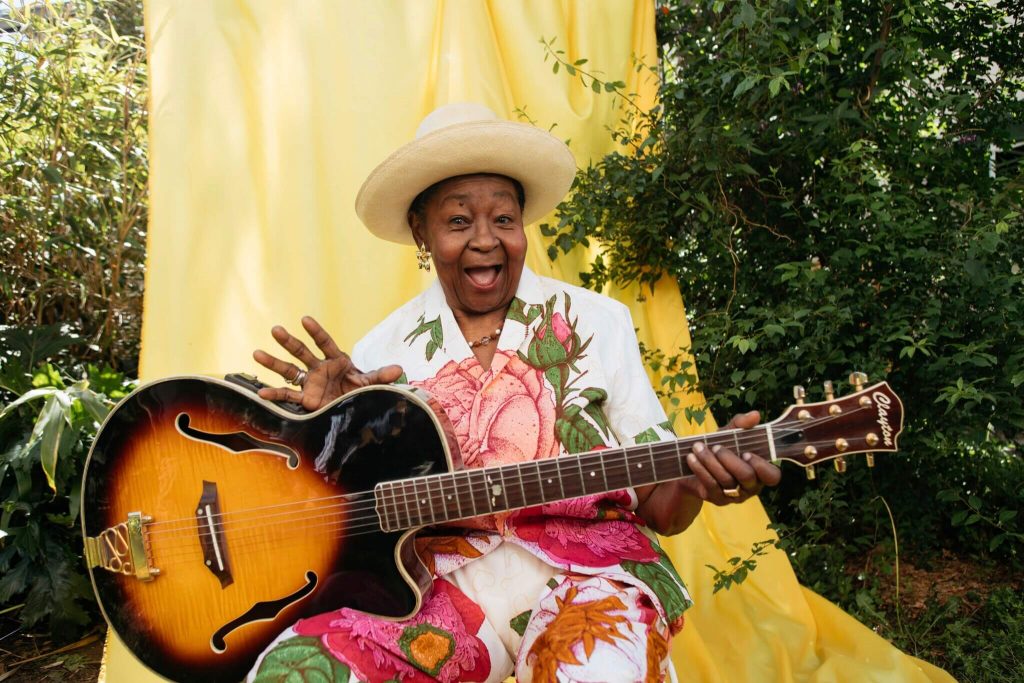 Calypso Rose’s zest for life is as infectious as ever, and 2022 will mark the return of the icon to center stage. The 82-year old Trinidad and Tobago-raised musician has announced her latest album, FOREVER, due August 26, 2022 via Because Music.

Throughout the new album, Rose presents original material with a distinctly modern approach, and revisits some of her greatest classics, giving us an album that speaks to everyone and transcends all ages. On FOREVER, the Queen of Calypso is joined by old friends and new artists throughout the fourteen tracks including: world music legend Manu Chao, soca king Machel Montano, Jamaican dancehall icon Mr. Vegas, Toulouse-based rapper Oli, and electro duo Synapson. The album’s first single, “Watina” is out now and features Belize’s The Garifuna Collective along with stellar riffs from none other than guitar legend Carlos Santana.

Calypso Rose is a goddess of música del Caribe: a person who offers her heart & changes people’s lives & destiny.

Born on the small island of Tobago to a religious father working as a fisherman and a stay-at-home mother, Calypso Rose emerged as the epitome of Caribbean music in the 1960s. She enjoyed her first successes in the 1960s with such hits as “Fire In Me Wire” in 1966, played with Bob Marley & The Wailers in New York the following year, and was crowned queen of the Road March – the Trinidad Carnival’s climax – in 1977. She was also the first woman ever to win the Calypso Monarch contest in 1978.

Since her 2015 release of Far From Home, featuring multiple collaborations with Manu Chao, Calypso Rose’s career has been booming internationally. She has continued to spread her music across the world, performing around two hundred concerts over four years including the Les Vieilles Charrues, We Love Green and WOMAD festivals, and the renowned Olympia Hall in Paris. Rose also performed at Coachella in 2019, ​​becoming the oldest artist to ever grace the stages in the history of the legendary festival and, around the same time, performed a stunning Calypso version of “Amazing Grace” with Tim Timebomb & The Interrupters.

With her music, Calypso Rose carries an optimism that shines through her music: a delicate balance between tradition, modernity and universality. The Calypso Queen combines all of that and her universal messages and views on societies with the world on her new album. She also brings up as many hedonistic subjects like partying or the energy of youth as she does the battles waged throughout her career: feminism, equality between peoples and individuals, her unwavering hope for a better tomorrow. If she has become one of the most respected artists in the world, it is precisely because of her ability to explore the double entendres so dear to calypso.

While the name Calypso Rose will be forever associated with her country Trinidad and Tobago, the love story that has bound her to Belize for almost forty years is part of her music, her career and her life. With “Watina,” she pays homage to the Garifuna, a Caribbean people scarred by slavery, excluded from memory, and part of whose population now lives not only in the United States, but also on the coasts of four Central American countries: Honduras, Guatemala, Nicaragua, and thus Belize.

“Watina” is a song full of devastating history, and contrasted by cheerfulness and celebration. Ivan Duran, Rose’s Belize-born longtime producer was also the “sound architect” for the late Andy Palacio, who co-founded and led the Belize-based band The Garifuna Collective until his untimely death in 2008. “Watina” was originally a local hit for The Garifuna Collective and, according to Duran, Calypso Rose was the only person who could recapture the frenzy and the impact of this song while respecting Palacio’s legacy. By recording and reimagining the song with the same musicians, she reaffirms her Belizean ties and once again exploits the contrast between the festive spirit and the social dimension of the music.

Through sensuality and smiles, her songs convey strong messages, particularly about the status of women in the various societies she has come to know well: the Jamaica neighborhood in New York City’s Queens borough, Paris, Trinidad and Tobago and Belize. These are the four places that nourish her music, and the places in which FOREVER was recorded. This is why so many influences make up its fabric, ranging from rocksteady to soca, from ska to mento. The years and musical genres may have passed but her songwriting remains the same.