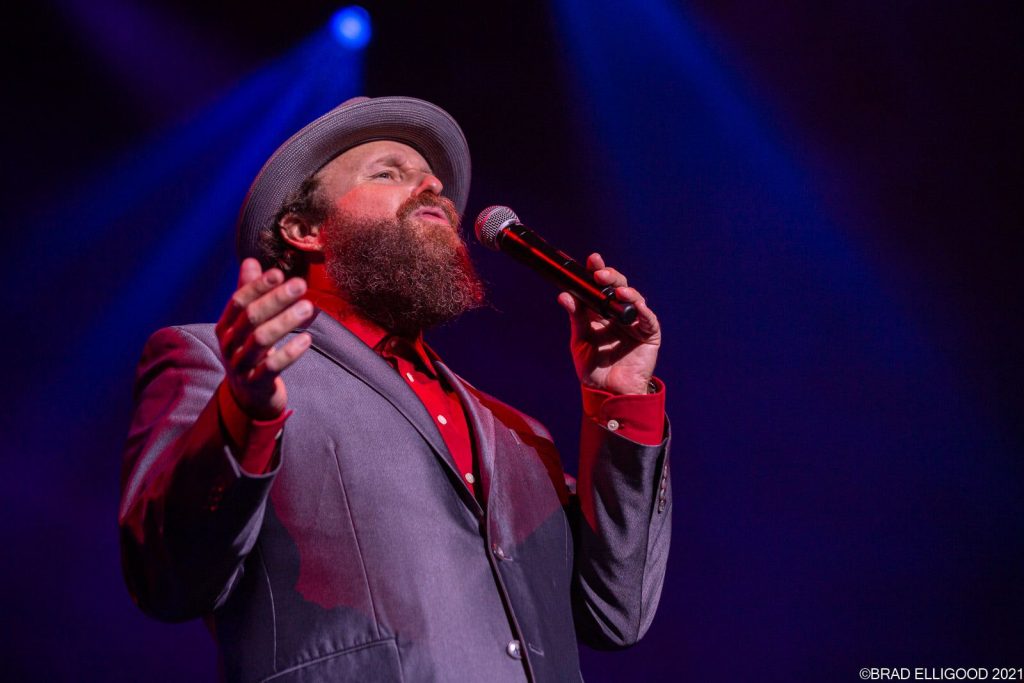 There is no greater indication of the love blues enthusiasts feel for an artist than ticking their Blues Music Awards ballot for their favorite nominee. By that measure, John Németh’s recent win of his 26th BMA, this year for Vocal Instrumentalist, is proof that he’s one of the most beloved blues artists of our time.

But another significant demonstration of love is the way the blues community rallies to support an artist in need. John Németh is feeling that love as he faces radical and potentially career-threatening surgery for the removal of an ameloblastoma from his jaw in June. To date, the Go Fund John’s Jaw campaign has raised over $82,000 toward the $135,000 goal.

American Blues Scene discussed the urgent health crisis and recovery plans with John and his spouse Jaki Taylor upon his return from Christoffer “Kid” Andersen’s Greaseland Studios in California. John’s trademark good humor and Jaki’s support and positivity were much on display as they expressed their deep appreciation for all of the support they’ve received.

Did you just get back from Greaseland, John?

Were you just having fun at Kid Andersen’s studio or making a new record?

Since my operation had been moved out a month, I had a month’s vacation basically. I cancelled all my work, had nothing on the books. I got to go to the Beale St Music Festival Friday, Saturday, Sunday, and I hung out and played with all my friends at the blues tent. On the last day I sat in with Elvin Bishop ‘cause we go way back.

Man, it was so much fun! They brought us out for two encores. Afterwards Elvin had a great idea, Why don’t we all pitch in and make a record with John and we can help pay his medical expenses? We all got together like the family we are and played some music at Kid’s. It was like old times and came out great.

I watched the little snippet of a video that was on your FB page and saw Elvin. Who were the rest of the folks there?

When can we get this record?

The idea is to get it out next month or July.

I was just watching a video so I could say this right, ameloblastoma? When did you realize something was not quite right with your jaw?

John: I had actually bitten a bullet that was in some deer meat.

John: A piece of copper from a hunting bullet. It had taken out part of a filling, so I went into the dentist. He noticed a tooth was moving, and he asked me about it. I said, I don’t know, I know lots of people my age and their teeth are moving. I saw that, and it didn’t strike me as anything different than what I’d seen in other folks. He took an X-ray and he found out that I had [in Italian accent] ameloblastoma.

Jaki: Not our good buddy.

John: My evil buddy Amelo. He wanted to live in my jaw.

Jaki: Since you were about 7.

John: He said that’s when those things start, when you get your adult teeth in, and sometimes one of the cells – I think amelo is what creates the enamel, so it’s a hard one in there, that’s for sure. It’s all within the bone wrapped around a nerve.

How long ago was it that you got this diagnosis?

What did you think about that? What were you told?

John: It’s really scary. First of all, I don’t like the idea of having to get cut on.

I’m pretty cool because I know that it’s do or die on that one. There goes the singing career. It’s scary like I think of all the guitar players who had their hands operated on and they didn’t come back. Or trumpet players who had new teeth and can’t play the trumpet anymore and all those weird things.

When I talked to you and Jaki at the BMAs, y’all’s upbeat attitude was amazing. Jaki said, once you knew it was benign, you knew you could handle whatever it was, which is a courageous thing to say when it’s career-threatening. So you hunted around and found a specialist. Tell me how you went about searching for someone to work with you on this?

John: My dentist referred me to a top oral surgeon in town that he knew and went to school with. I went to this cat, and he happened to go to a conference in Texas and happened to see this Dr. James Melville from The University of Texas Health Science Center at Houston (UTHealth), this specialist who talked about doing this kind of work. He came up with a new way to do it and got really great results. The local oral surgeon said, I think I found your guy. He said, if it were me or my family or anyone I knew personally, I would send them to this doctor, especially with the fact that I’m a singer.

Jaki: It was crazy because the oral surgeon in Memphis was just at this conference the week before, and then a week later, John came in. When he was describing the procedure, and the results from this technology, I swear he had tears in his eyes, just being impressed with someone in his own field and seeing it next level. Due to the size of John’s tumor, a bone graft is just not the best option. It would require a large amount of bone to be extracted from his leg most likely and that would have lasting impacts on John’s mobility permanently.

John: Sometimes it doesn’t work, and they have to do it all over again.

Jaki: From the other leg, so we’re grateful that this option exists and we’re connected with him.

Sometimes you get gifts in unusual ways, I guess. You’d probably like to return this gift for a cash refund.

Jaki: [laughing] I can’t argue with that.

John: They’d just have me go to someone in their local network. They gave me list of ENTs who work in the hospital. My dentist said, you don’t want to go to an ENT. You want to go to a specialist who does this; this is their job. I took his word on that when they sent me these ENTs. Usually what they do is just cut the thing out, put a steel plate in, and stitch you up. They don’t try to keep you looking goof or anything like that.

Jaki: Also preserving the formation of your jaw is such a big part of singing and playing harmonica, and that’s not the top priority from that perspective. The dentist strongly advised against that given John’s career.

So how have the appeals gone? Are they willing to listen to reason?

Jaki: They will not; it’s a closed door situation. Unfortunately because we’re self-employed, we always went for a high deductible. That’s why we’ve had insurance is for something like this. Even in our 20s, we were always insured.

The insurance company we’re with currently, it’s all about within network. It covers if there’s an emergency situation outside of Tennessee but not a scheduled surgery. UTHealth spoke with them and gave us the verbiage to use, certain words and ways to code it and they weren’t accepting any of that. UTHealth spoke with the insurance company directly, and coverage is just not an option. But we’re getting very close to our goal in our GoFundMe. It’s overwhelming the support we’ve received. We’re incredibly grateful.

You have someone who’s putting y’all up so you don’t have to deal with hotel costs?

Jaki: Because it’s one month out, we don’t know what to expect. We have to be there initially for a two-day hospital minimum stay, then John has to stay in the area for a week so they can they monitor his progress. We’ll stay and hopefully all goes well. Swelling is the biggest concern. We don’t have to pay for lodging which is amazing.

John: My friend Denby Auble who’s the owner of Blue Corn Records who put out Memphis Grease. They live in Houston.

Jaki: We’re so fortunate in the way everybody’s shown up for us. It’s incredible. We are feeling the love.

Will you have to go back for checkups?

John: It will be a long process. I think they said in about a year the bone should be solidified. Next May, I will start process of having teeth implanted on my lower jaw.

Jaki: I think they said year and a half to two years for the whole process.

John: For all the teeth and everything, they can’t put them all in at one time.

Jaki: They call it a flap, which is not my favorite word or description, you can use in the interim; it’s not even a bridge really, it’s just strictly cosmetic. But it might work for word formation or harmonica playing.

The Go Fund John’s Jaw description says that “he will lose the majority of his lower jaw, with only his molars remaining intact.” That’s a big deal.

You’re going to lose the beard, I suspect.

John: Yeah, I’m going to have to take the beard off. It will grow back.

Will you be able to talk when this is done?

John: I’ll probably be able to talk in a couple weeks. They said the stitches will heal up in about 30 days, so I can fly after 30 days. As far as how soon I can use the jaw for singing and playing harmonica, I don’t know; we’ll have to see what’s going on.

I’ve done it my whole life, so my lips and tongue might work just fine. I can tell already, I’ve been working through it the last few months. When my tongue goes to back of my teeth on the lower jaw – that’s where the tongue hits when I speak and sing, the tumor pushes the tongue over to the side, so I have to make compensation for it already.

So what are you going to do for a year?

John: I won’t be able to do hardly anything for 30 days. I’ll probably watch a lot of basketball ‘cause the NBA finals will be happening. I’ll be sitting on my porch enjoying the weather.

You’ve got small kids, and Dad is going to come home not looking the same. What have you done, if anything, to prepare them or explain this to them?

John: I told them exactly what doctors are going to do with me. My daughter is intrigued. My son is pretty worried about it; he’s doing ok.

Jaki: Our daughter Ava (11) is an internal processor. Otis is 7.

We’ll probably sit down and talk about it a little bit more. Time is different with them, but also the more information they have, the less they can fill in the gaps with whatever their minds can come up with. As a general rule as parents, we’re always straightforward with whatever’s going on.