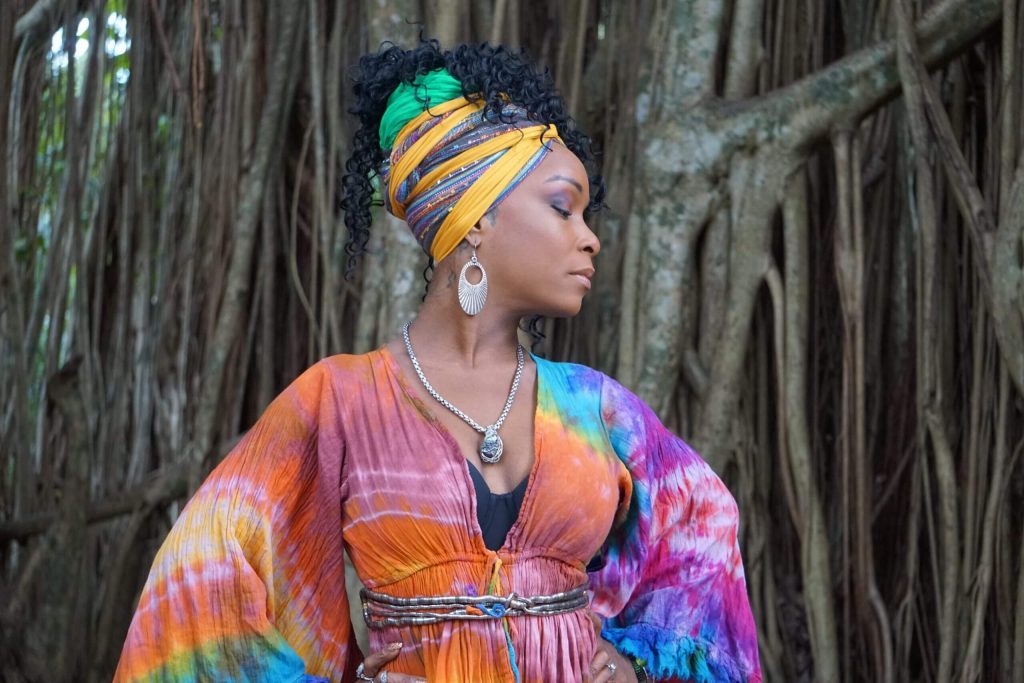 “When it came to this record, the key words were ‘ACKNOWLEDGE’ and ‘HONOR,’” contemporary blues/soul singer Kat Riggins proclaims about her new CD, Progeny, releasing June 24th on Gulf Coast Records.

I have always tried to share music in a very transparent and vulnerable way and I’ve learned that I do this most successfully when I connect that little girl that I used to be to the woman that I’m becoming.

I mean, when I remember things like how my Mama spoke her heart or how my Daddy’s voice made me feel when he sang Sam Cooke, it empowers me to be wide open and still feel safe. THAT sentiment is what I needed to acknowledge and honor with this project!

South Florida-based Riggins was inspired by the variety and abundance of music in her parent’s collection; and it makes sense that her own music is peppered with hints of R&B, soul, country, gospel, hip-hop, and rock-n-roll. Make no mistake; however, Kat Riggins is undeniably a blues woman. She travels the world with the sole mission of keeping the blues alive and thriving through her Blues Revival Movement.

She has been vocally compared to Koko Taylor, Etta James and Tina Turner, to name a few. While obviously influenced by those icons, Riggins has a voice and delivery all her own. Full of power, rasp and grit, she can belt out one of her contemporary blues originals one minute, then, deliver a tender, sultry standard the next. She does this all while making each person in her audience feel as if she is speaking directly to them. Blues Revivals are interactive and personal no matter how large the crowd. This intimacy is what makes every Blues Revival a memorable experience…not only for the audience, but for Kat.

To bring Riggins’ musical vision to life on the new album, Gulf Coast Records founder/guitarist Mike Zito assembled a sparkling list of talented musicians to back Kat’s powerful, sassy vocals, including Zito, himself, on guitars, Matthew Johnson on drums, Doug Byrkit on bass guitar, and Lewis Stephens on keyboards, augmented with special guests Melody Angel on guitar (“Woahman”),  Albert Castiglia on guitar (“My City”) and Busta Free on rap break (“My City”).

Dr. Maya Angelou said, “You can’t really know where you are going until you know where you have been.” With this album, Riggins chose to honor that belief by paying tribute to her upbringing. In 12 original songs and a single a cappella gospel interlude, Kat kept with that theme and allowed her Spirit and spirit guides to have complete control when writing these songs. Progeny is compiled of songs about love, pain, passion and anger. It’s Kat’s personal testimony of strength, peace, joy, God and so much more!

These songs run the gamut between sweet soul-blues ballads to high-energy blues- rockers, with Kat’s M.O. the same throughout. Whether it’s a blues-funk party scene that moves your booty or a heart- breaking soul stirrer that moves your spirit, Kat wrote these songs to move the listener from a place of truth!

Overall, Progeny is an acknowledgement of my human existence so far, and with it I hope to honor ancestors like my mother and elders like my father. Now that I’m in my 40s it seems that those two words come up a lot in my conversations with myself. Each time they do, I see a little more growth.

Kat says the fact that by definition, “Progeny” means, “a descendant or descendants of” made it the perfect one word synopsis of the album. Songs like, “In My Blood” and “Warriors” are prime examples of this homage. In “Warriors,” the statement is that no matter what we might face in this life, we won’t face it alone. There are songs about hindsight, about greed and about faith. There’s something for the sweet, sultry, ballad lover who craves a soft, slow groove. Then, there are the high energy movin’ and groovin’ numbers like, “My City” and “Espresso,” a hip-shakin’ song about how the singer’s love keeps her heart skipping beats.