Mississippi Heat’s 13th album, 'Madeleine,' is just in time for the venerable Chicago blues band to celebrate its 30th Anniversary! 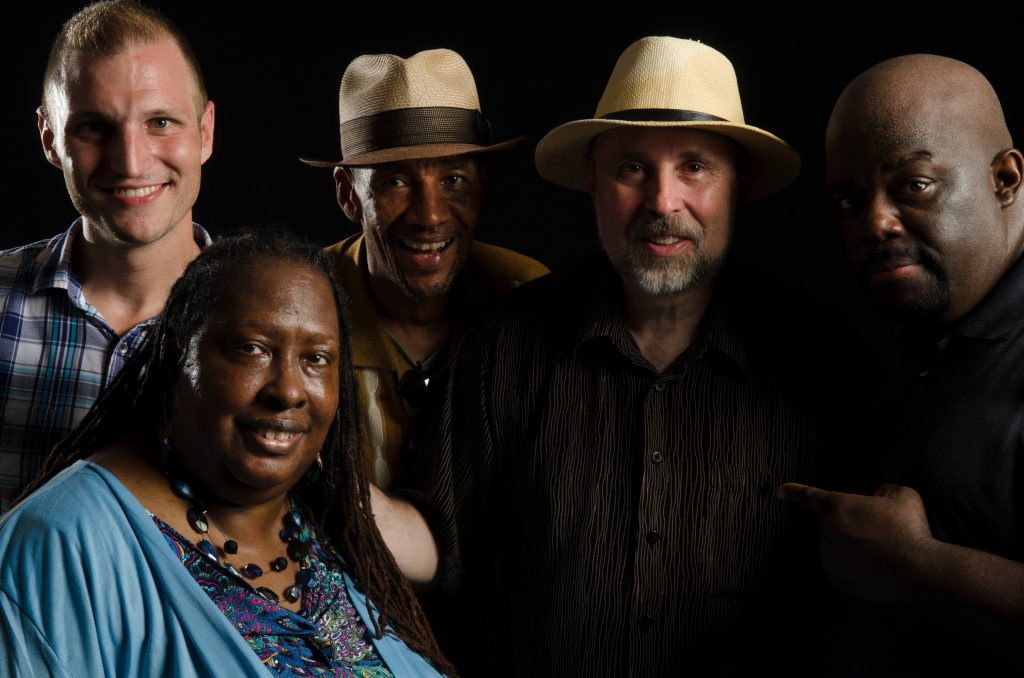 Some describe Pierre Lacocque and his band Mississippi Heat as an enigma, wrapped in a riddle. They’ve been a celebrated blues band for three decades even though Lacocque is from Belgium, nearly 5,000 miles from the Mississippi Delta. Furthermore, although the band is named for where the blues was born, the music they create is from where the blues grew up, the gritty streets of Chicago.

Pierre is not only bandleader but chief songwriter for the group (lyrics and all) although he doesn’t sing the songs. That being said, once one peels back the layers, he has more in common with those Windy City players and Delta originators than meets the eye. The band’s 13th album, Madeleine, is proof positive.

Although the group’s last six albums were on the Delmark imprint, Madeleine has a street date of April 8th via Lacocque’s own label, Van der Linden Recordings. It will enjoy global distribution via Select-O-Hits and in England, Europe, Australia and New Zealand by way of their sub-distributor Proper Distribution. Recorded and mixed at Chicago’s prestigious V.S.O.P studios; and mastered by Paul Blakemore (Nashville, TN), the album is co-produced by Lacocque and Grammy and Blues Music Award Winner Producer/Engineer Michael Freeman.

Over the years, as you know, there were some changes. Of course, Bob Koester died. But he had sold Delmark to Julia Miller and Elbio Barilari. So I’m very good friends with them, but I was waiting, waiting. In the meantime, I got two new CDs ready to go. So, you know, I was kind of itching. So this one, I decided to do it myself to get something out because I have not released anything for years. I could have done it, I suppose with them, but I decided, you know, let me handle it this time, as a gift to my family, my wife, my kids, grandkids or what have you and and then just push it to the hilt and see what comes back. I may go back to to Delmark; I’m on very good terms with them.

I was kind of waiting and, of course, the pandemic played a role as you know, of course. It’s easy to put that as a factor. I finally decided, after talking to my publicist Frank Roszak, just do it, you know, do it in 22. Because the market is opening up again, you’ll notice we’re traveling, we are extremely busy now, and hopefully knock on wood, you know, it’s behind us now, the pandemic.

Mississippi Heat is what Elwood Blues would describe as a show band. The music is large, filled with guitars, horns, B3s, piano, and vocals with Lacocque’s harmonica mastery leading the charge. Pierre also wrote all but 3 songs on Madeleine, posing the question: how does one write lyrics, particularly from a female perspective, if he doesn’t sing them?

You know, there are different levels because I don’t sing. So usually a woman, Inetta Visor or another woman singer sings for me. So when I write, I don’t know, it varies, sometimes I just go for it. From my point of view, sometimes they meet and transcend the sexes, like experiences of loneliness or something like this, or happiness, what have you. But eventually, I do have to consider who sings it.

So later on I may edit the same message, but from a female point of view, which will be probably my first, or I may have somebody else in mind. Like, the song “Uninvited Guest,” I felt was perfect for Lurrie Bell. I felt that I don’t need to touch this. I showed it to him, and he loved it.

We rehearsed it alone, he and I a few times to make sure and yeah, man it’s perfect, you know, that kind of stuff. But when I write it depends, so like the single, “Havana en mi Alma,” I knew was going to be Inetta. So it’s still my perception. But I put it in a way that a woman can relate to it as well. Actually a male or female could sing it.

On Madeleine, Mississippi Heat adds other genres to the Chicago blues for which they’re most famous. A shining example is “Havana en mi Alma,” which has a decidedly Caribbean flavor.

It’s a true story or at least triggered by a true story. My wife is Cuban. And I have written over the years, you know, Latin, Santana style of songs for her, you know, like, with Latin feels, rumbas and stuff like that. We had gone in actually 2016 or so, we had gone to visit Cuba. This was before Trump was voted in. But anyway, so we had gone and for me it was the first time to visit her country and Havana. And I was very moved. Very moved by the people, the survival, the hope behind the survival. So I decided, you know, well, I could do another robot like Latin or Santana like salon to celebrate what I saw and felt but I said, Why not reggae? Because reggae integrates the two, you know, the despair and the survival, but also the hope. Frankly, I’m happy with it.

As a bandleader, Lacocque is famously known for the fairness and generosity he extends to his bandmates, whether on the road, performing live or in the studio. Examples of that fairness exist on Madeleine as well. Michael Dotson wrote “Everybody Do Somethin'” and “Truth Like Rain,” while Inetta Visor wrote “Trouble,” (arranged by Michael Dangeroux). These are 3 of the most decidedly Chicago-centric tracks on the album.

Yeah, Michael Dotson Yeah. Michael went back to Europe, where his wife and kids live in Greece, but he was with me, was the history part of the family for 10 years. And when I record I have options, you know, I can go all the way in you know, appear like Lacocque all the way, or I can also invite my musicians to contribute which has been the way it has gone. You know, I like to invite my musicians to write their own songs and Michael writes beautiful songs and I know he’s a songwriter. Inetta as well, so I, you know, invited them to bring their own material and to make a nice panoramic sound in terms of Mississippi Heat.

Inetta is a super guest at this point, you know, there’s been issues with her health as you may know. And so it’s difficult for her to travel internationally and travel long distance, things like that. She’s still an eternal super guest, and I use her here in Chicago as often as possible as a second singer. Occasionally only singer but typically she’s a super guest and does duets with Danishia Hamilton, who’s the other singer.

Madeleine is a deeply personal album for Lacocque, and the story behind the instrumental title track helps people understand there are more commonalities between the Belgian harp player and the blues’ black originators than there are differences.

It’s very personal. The song “Madeleine” it was the first name of my maternal grandmother, and I wanted to honor her, and with her, my grandfather as well. I mean, they were a wonderful couple. My grandmother was more the alpha in the relationship and was very present in our lives and community where she lived, and she had fourth grade education, like most people at that time, but people trusted her and would come for advice. Both sides of the family for many generations, we hail from Belgium. During World War II, both sides of the family were involved in hiding refugees, and certainly prisoners, you know, from the Nazis camps and Jewish families as well and even Polish and Russians, you know, escapees and all that. So I’m very proud to say that.

My grandfather was involved in the resistance, actually the head of it locally. He was also imprisoned and tortured by the Nazis. I also had an uncle that died in the camps because somebody snitched on him. I’m very proud of what my family has done. But certainly my grandmother was very loving, devoted and amazing, intelligent and very committed to the family. So playing it, you know, it’s like, there are things that I cannot repeat. Maybe I can, I don’t know, but it was true in the moment you know, moods and moments. It’s a celebration, it has pain in its moments, it’s written in a minor key, but it’s also a celebration. So it’s like the combination of the two, missing her in this case and certainly also celebrating her, and telling her thank you.

I’m French speaking. You can hear it in my accent. But I’ve always had a profound respect for where this music comes from, and, as I say, the honor that it deserves you know. It’s African American music, it just happens to be that I feel it. I feel its message and I can relate to it like many people because it’s universal.

The depth of this music is really based on an African American experience, you know, pain of the race, all of that, and surviving it. But I think that the universality of it for me is that it does talk about, you know, pain that human beings can relate to, even though they may not be African American. I think there’s a language, there’s a culture, there’s a message. Somebody playing blues without an alphabet that comes from the Delta and African American experience, then it doesn’t feel real. You know, I mean, same with the harmonica. There are certain ways of expressing an emotion that have a cultural context.

For 30 years, Pierre Lacocque and Mississippi Heat have been taking the blues from Chicago to the world. In celebration of their pearl anniversary, they have delivered a shining, lustrous example of its best. The raw emotion, delivered through both music and lyrics exemplifies the idea that a songwriting harmonicist from Belgium can not only feel, but express pain and triumph in a language of American design.

Yes, of course, it’s influenced, there’s no doubt about that. But it’s like how people will detect the freshness to this and also a message that I feel about blues. I feel understood. It’s music that makes me feel understood. And of course, Madeleine is one that I would hope people listen to. You know, I kind of feel home.