Make plans to be at the crossroads by hook or crook to catch all the action that’s happening in a town that knows how to give the blues its due. 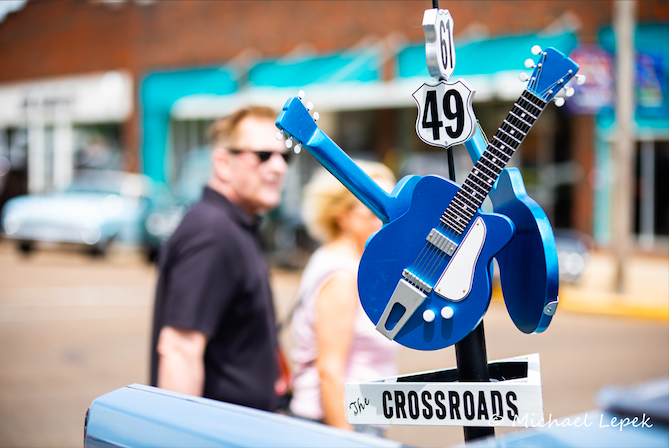 Here’s a public service announcement to all who are bemoaning some of the so-called faux blues festivals that have been booked across the country. You want the real deal? Then, head on down to Clarksdale, Mississippi the weekend of April 15th, 2023 for their annual Juke Joint Festival.

While it’s hard to capture exactly what makes this festival so special, there’s must be a reason why hotel rooms for that weekend are already hard to come by. So, book now, if you can. Make plans to be at the crossroads by hook or crook to catch all the action that’s happening in a town that knows how to give the blues its due.

While the “official” festival date is always on a Saturday, there is also lots of music in the days leading up to it. Heck, the post-fest Sunday night was epic with all-star jams at a real juke joint (Red’s) and marathon performances by the likes of Lightnin’ Malcolm in the magical Juke Joint Chapel at the Shack Up Inn. Come 1:00 am, some folks stumbled upon Jesse Cotton Stone jamming on a flatbed in a nearby cotton field. It’s all incredibly special, and during one weekend there are sure to be so many unbelievable musical moments.

The only downside to all this is that it’s physically impossible to take it all in as there is music going down all over town, So, your FOMO is on high overdrive throughout the weekend as there is always the chance you might miss an “only at Juke Joint moment” like witnessing Christone “Kingfish” Ingram’s triumphant return to his hometown or catching Charlie Musselwhite backing up his old mate Kirk Fletcher in a jam session in front of the Stone Pony Restaurant.

Musselwhite might be a household name to blues enthusiasts, but Fletcher was a revelation to many attendees. This guy’s got chops bolstered by his blues resume and the recommendation he received from festival co-founder Roger Stolle, who said that Fletcher’s performance at the would be one of Juke Joint’s “can’t miss” moments and it was.

Unfortunately, this reporter did miss “Kingfish’s” return to his beloved 662 area code that also happens to be the title of his second album. People packed into the old Bank Building to catch this young up-and-comer show why so many are banking on him to be the torchbearer for the next generation of blues stars.

But Ingram was just one of the many performers featured on the festival’s jam-packed schedule.  There were over 20 iconic venues hosting live music on stages ranging from the New Roxy, an old theater in the town’s old historic African American business district, to catching a Kimbrough (Robert Sr) at Red’s authentic juke joint on Sunflower Avenue. I heard that the Kimbrough show did not disappoint, but it is utterly impossible to be everywhere during festival weekend in Clarksdale.

Kenny Brown is another Juke Joint stalwart who plays there year after year. Brown has recently gained more acclaim with his smooth slide guitar on the Black Keys 2021 release, Delta Kreem. Brown learned his brand of North Mississippi all-star blues from legends like RL Burnside. His stellar skills were also featured in Samuel L. Jackson’s cult classic, Black Snake Moan. Brown laid it all down with his band at the Shack Up Inn and played some acoustic shows on Friday and Saturday.  At his Mint show, he was joined by Deak Harp, who picked up some harmonica tips from James Cotton because that is how it’s done in the Delta.

As if that epic Saturday night schedule wasn’t enough, there was music running in town all weekend long where attendees finally were able to enjoy a sun-splashed festival after Covid-cancellations and suffering through many miserable weather days before that. With this year’s schedule pushed back due to the Easter holiday, the Juke Joint Gods were certainly smiling down on the city of Clarksdale.

The fun continued Sunday with Stolle’s Cat Head Records hosting their 20th Annual Mini Juke Joint Festival. The lineup included a cast of festival favorites like Reverend Peyton’s Big Damn Band. This trio lit it up with their unique brand of good-time country blues. Kirk Fletcher followed the Big Damn Band with Charlie Musselwhite in tow. The music continued at Cat Head and on Second Street throughout the day before moving on to Red’s, Shack Up Inn, and other spots.

Come Monday, the festival goers packed their bags and memories to head home. Some flew back to far-flung locales in Europe or South America while others drove to Chicago, Texas, and other stateside destinations. Although Juke Joint attendees hail from diverse backgrounds and locales, everyone bonds over the shared love of music and the beautiful vibe that permeates all around town. It’s been that way since Day One and it’s just another reason why this festival is so special in the minds of many.