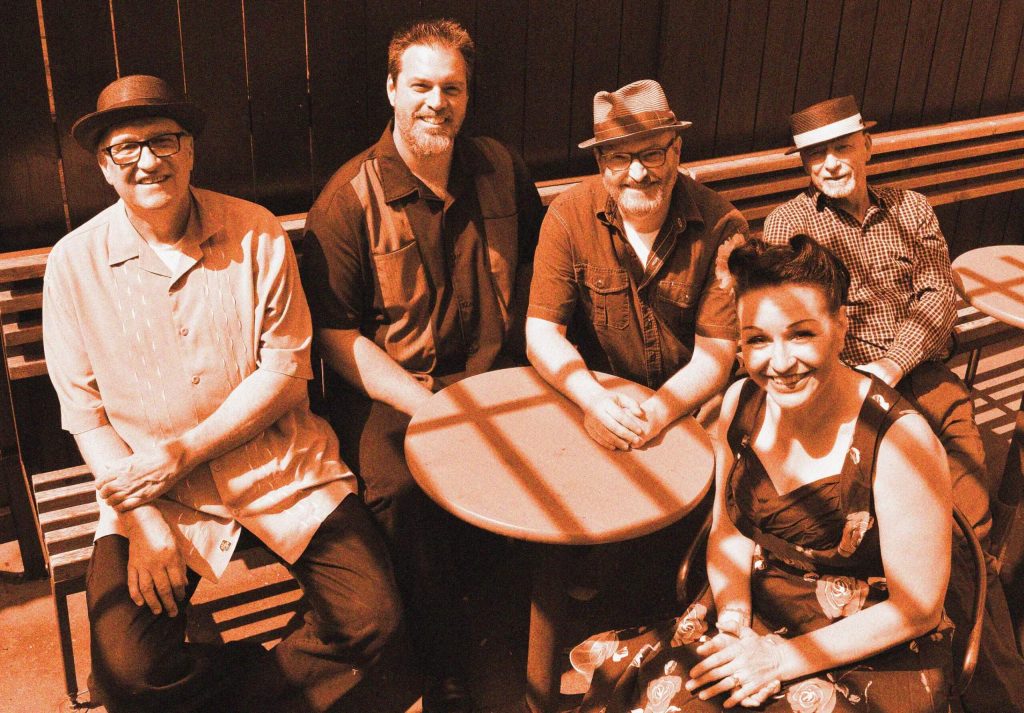 Back in 1995, Milwaukee-based drummer John Carr heard a great CD playing at a bar, and asked the bartender what it was. Behold, it was the recently released Chess New Orleans anthology. At that precise moment, The Hungry Williams was born; and now they bring to the world their new CD, Let’s Go!, releasing September 9th on Rochelle Records.

Carr bought a copy of the New Orleans anthology that week, thus beginning a fascination with ‘50s R&B music. Carr knew lots of New Orleans music, such as Lee Dorsey, Huey “Piano” Smith, Allen Toussaint, and the Meters. But this was a whole different vibe. It SWINGS, hard. There’s a Caribbean flavor, too, that was nothing like he’d heard before. THAT is the sound Carr has chased ever since. In fact, The Hungry Williams just might be the best New Orleans-sounding band NOT from the Crescent City that you’ve ever heard!

By 2015, Carr had played with everyone and anyone in town, earning the reputation as “Milwaukee’s Ringo.” But the itch for a hard swinging, horn driven band with that Latin flair had never subsided. He had a name picked out, in honor of one of the best New Orleans drummers ever, Charles “Hungry” Williams. But most importantly, Carr knew who to create a band with.

First up were vocalist Kelli Gonzalez and bassist Mike Sieger. Carr and Sieger have been playing together in various incarnations since 1991. No rhythm section is tighter and livelier than these two. “Mike and I play joined at the hip,” enthuses Carr. “We each have our own flavor of keeping the beat, and the simpatico between us means we come up with something relaxed and happy.” Sieger recruited Carr into a zydeco outfit featuring Kelli Gonzalez as lead vocalist. There, Carr found in Gonzalez someone who knew ‘50s R&B even better than he does.

Next came Carr’s good friend and guitarist/vocalist Joe Vent. They’d come up together in the ‘80s, playing the New Wave guitar-based pop of the day. In the ‘90s, Vent led his own band and ran Don’t Records, at the time the home of local heroes Paul Cebar and Willy Porter. By 2015, Vent was ready for a change of pace.

So was keyboardist Jack Stewart, former bandmate of Carr’s in local jump bluesers, The Uptown Savages. Stewart started in the ‘60s playing in blues-based jam bands, then in the ‘70s he started Milwaukee’s first punk rock band, Death. The Uptown Savages played for nearly 20 years, and when that was done, Stewart happily agreed to join Carr’s new project.

The core was in place: a group of like-minded musicians ready to bring the swing to the masses that don’t know what they’d been missing. They played a couple hundred shows and recorded an album. Things were looking good until … COVID.

Plans to promote their 2019 debut, Brand New Thing, were derailed. A Christmas EP, Mambo Santa Mambo, was in the can, and was released mid-pandemic. But, what to do in the meantime? Figure out how to practice online (which they did, eventually), and maybe write some originals. Carr, Vent, and Gonzalez started sharing their ideas electronically, and lo and behold, four new tunes emerged; plus a lot of great new covers worked out together, in cyberspace. Carr decided a new album is in order.

One day, Carr heard a song by the California Honeydrops that gave him chills, because it was the sound he’d always had in his head: a relaxed, authentic performance, the sound of instruments together in a room, along with the warmth that vinyl collectors love. Thanks to the internet, within 24 hours Carr was in touch with Jacob LaCally, the engineer behind that sound. A plan was hatched: LaCally would come to Milwaukee in September, 2021, to spend three days recording an album, all together, in one room, without headphones. Carr nearly wept with gratitude. This could be the album he always knew he could make, but didn’t know how.

For the Let’s Go! Recording sessions, Carr brought in their favorite saxes: Jason Goldsmith on tenor, and Casimir Riley on baritone. Fun fact: Carr is the second in a three generation line of Milwaukee drummers. Goldsmith came from Carr’s dad’s 18 piece jazz orchestra; Riley from Carr’s son’s band. Like they say, it takes a village.

The recording process was a joy, Joe Vent says. “Once we got the room and the vibe locked-in, we were nailing takes. It was the best recording situation: no thinking, just playing. The lines between instruments were incidental; we played these songs as a band, not individuals. That’s always been our goal.”

LaCally’s influence was key. Jack Stewart says, “It was great recording as a band and allowing the room sound to be present and not isolated. Along with being a great engineer, Jacob LaCally has a true understanding of the music we play. His input and suggestions on the music itself, not just the recording process, were on the money and enhanced the overall product.”

“Mardi Gras Day” – A Carr/Gonzalez original that was originally was released in February, 2022, for the holiday. At the session, Carr realized the track really needed a trumpet solo. LaCally knew Lech Wierzynski from the California Honeydrops. And again, thanks to the internet, Lech added just the right flavor of a second line marching down the street.

“Movin’ On” – This is a Stewart original that features the classic strolling Fats Domino rhythm of countless rock ’n’ roll singles. Stewart says, “‘Movin’ On’ is my tribute to Fats and Dave Bartholomew. The band and Jacob capture that spirit.”

“You’d Better Find Yourself Another Fool” – The Hungries love to sing, and you’ll hear that in this Lavern Baker number.

“One Monkey Don’t Stop No Show” – Who doesn’t love Big Maybelle? The Hungry Williams REALLY do. This is one of three songs of hers in the repertoire.

“Gee Baby” – A classic NOLA single, it’s been in the Hungries’ library since the beginning.

“Boss Man” – a Carr/Gonzalez original. Carr says, “This song came to me in a matter of minutes. Half an hour later I had a demo to share with everyone. That never happened to me before.”

“Big Mouth Betty” – A Gonzalez original, she says, “It isn’t really about any person and it’s not autobiographical, despite popular opinion. I just thought it would be fun to tell a little story.”

“Then I’ll Believe” – Gospel tinged song from classic NOLA label Ron Records, this has been in the book from the very beginning.

“669 (Across the Street from the Beast)” – This was a joint effort from Carr, Gonzalez, and Vent. At the studio, the plan was to record long enough for a fade, but once the band got going, it was too much fun to stop. So, what’s it like having Satan for a neighbor? You’ll have to listen to find out.