Wilco live is not about flash and stage antics. It is purely about the music. Jeff Tweedy writes with intent, meaning and message leading listeners to contemplation. 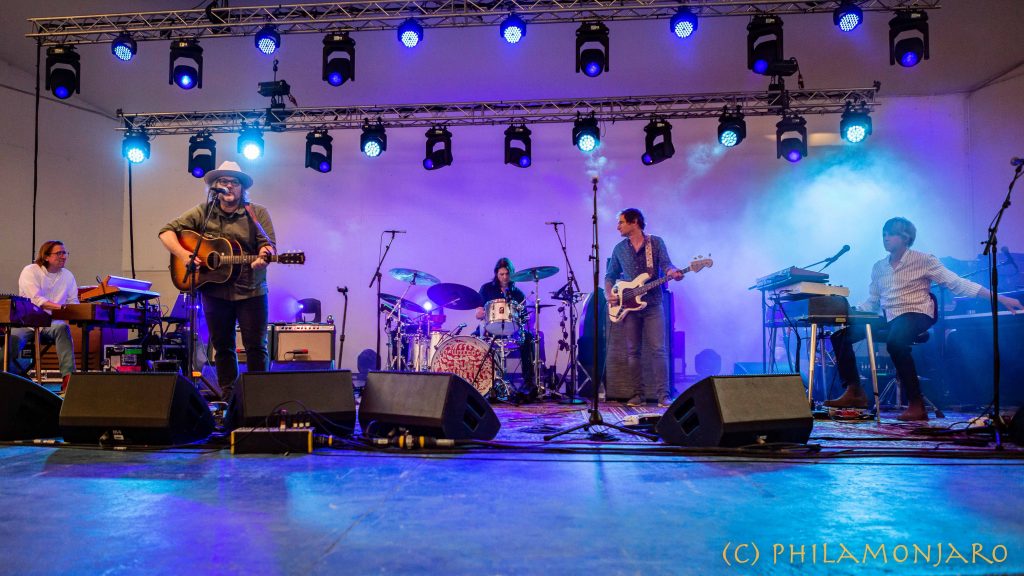 Tucked in the Burjassot area of Valencia, Spain, Wilco played to a packed house of enthused fans in the intimate, outdoor Casa de Cultura De Burjassot venue. One of their eight concerts here in Spain this summer as part of their longer European tour.

With their 12th studio album Cruel Country released last month, the 21-song double album provides lots of new songs worked into the live set. Notably this evening the title track “Cruel Country,” “Story To Tell,” “All Across the World,” “A Lifetime to Find,” and “I Am Your Mother” –  an alternative opening song on tour.

The set also consisted of several numbers from Yankee Hotel Foxtrot. Perhaps expected, after recently performing it live in its entirety for a number of 20th anniversary celebration concerts earlier this year. Controversial at the time, the 2001 YHF release now stands the test of time and is pivotal to their catalog.

This left plenty of room in the set with familiar songs stretching back throughout their songbook including “Box Full Of Letters” from their 1995 A.M. debut. But what is great for the superfans who are catching multiple dates on the tour, they are treated to different songs in a changing setlist.

It was only days prior, guitarist Nels Cline’s social media post stated he tested positive for COVID. Assuring fans “Protocols in Wilcoworld have been most rigorous” continuing “please don’t worry about me. I’ll recover and, in the meantime, cast my gaze out my window occasionally to view the minute slice of sweet Spain that I can see with a singular gratitude.” A graceful comment for something that must be hugely disappointing. A responsible and humble outlook in this precarious position of tours this season. Hopefully he will return soon. But for this night, the band carried on as a quintet without Cline.

Wilco live is not about flash and stage antics. It is purely about the music. Tweedy is so mild-mannered and focused on the songs. There is no room for anything else. He’s a songwriter and lyricist to lean into. He writes with intent, meaning and message for listeners to absorb, leading them to contemplation.

Born from the ashes of Uncle Tupelo, over their 25-plus- year existence, Wilco has forged a long standing reputation of thoughtful, hard-working, no compromise music. Music that is not easy to categorize. Unless you preface your categorization with “well not just a (fill-in-the-genre) band.” Thus they have grown loyal music fans including quite a following here in Spain.

I Am My Mother

I Am Trying to Break Your Heart

If I Ever Was a Child

All Across the World

At Least That’s What You Said

Tired of Taking It Out on You

A Lifetime to Find

I’m the Man Who Loves You

I Got You (At the End of the Century)