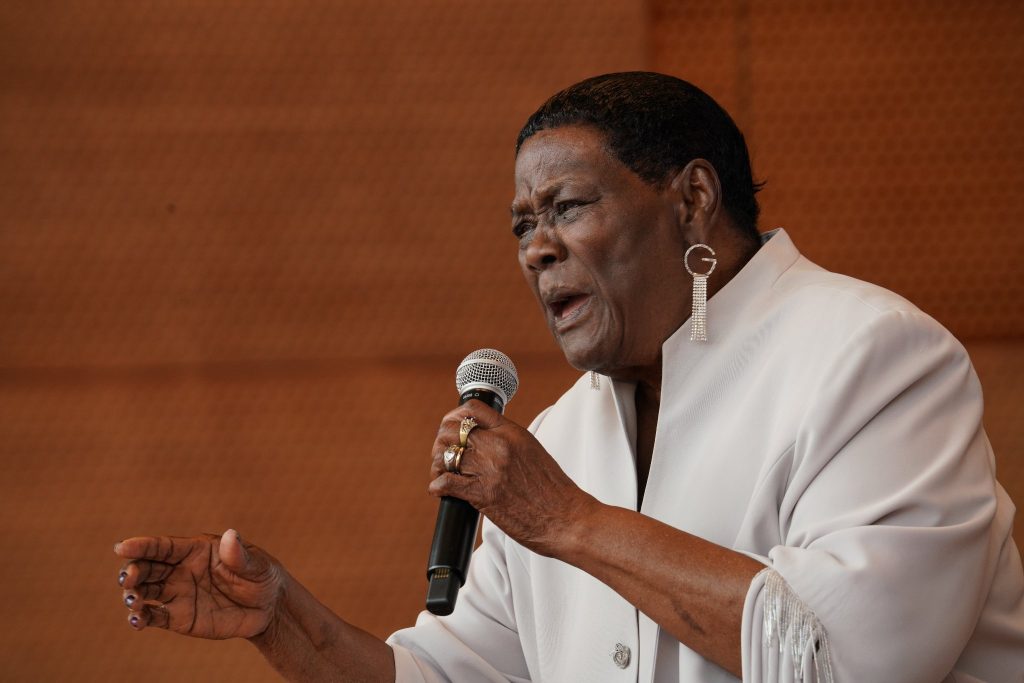 In true surviving the blues fashion, while receiving this award, Mary learned of the death of her last and youngest sibling, yet through tears she graciously accepted the long overdue accolade.

Buddy Guy calls Lane “The real deal,” and Bobby Rush expressed, “Mary Lane is way overdue for what she planned to do.”

Mary Lane was born in Clarendon, Arkansas on November 23rd, 1935. She remembers folks working in the cotton fields and singing the blues and decided then she wanted to be a blues singer when she grew up. She started in a church choir and singing and dancing on street corners for change, chaperoned by a guitarist named Al Montgomery.

Later on, she performed at her uncle’s club The White Swan, jumping on stage with Robert Nighthawk, taking the microphone and enchanting the crowd. In Brinkley, Arkansas, she met Howlin’ Wolf, whom she stayed singing with for some time. In the early 1950s she moved to Waukegan, Illinois, and began singing the blues wherever she could; on records with Morris Pejoe, with Junior Wells at Theresa’s Lounge, and also with artists such as Elmore James, and Magic Sam.

A favorite among peers for her dulcet tones, she nevertheless did not record again for several decades, remaining virtually unknown outside of the Chicago blues faithful; finally, in the early 1990s, Lane recorded a handful of tracks for the Wolf label. It took until 1997 for Mary Lane to record her first album, Appointment With the Blues; over two decades more for the release of her next one, Travelin’ Woman, at the age of 82, which also launched a new record label, Women of the Blues.

The record label launched really because of Mary Lane. My Women of the Blues Foundation is a traveling exhibit which includes Mary. I was in the studio with Jim Tullio and on shoots with Jesseca (Ynez Simmons) helping create a dynamic story and media attention in hopes of getting this new album picked up by a label. While in the studio with Jim, we thought what better of a way to kick off the label than with a national treasure like Mary Lane. She has been under the radar for decades, while standing side-by-side singing with the blues masters. This is the story that Jesseca tells in her amazing documentary. I hope that this CD will take her into the spotlight as she well deserves. It was my mission to make sure her story was told.

While Travelin’ Woman was being recorded, Lane was also working on the documentary film, I Can Only Be Mary Lane.

During all that time, Lane continued to perform in Chicago and the surrounding areas, and raising seven children, many of whom are singers as well.

For over six decades, the incomparable Mary Lane has brought the true blues to Chicago.

Mary Lane and The No Static Blues Band